Minutes after the tennis star's Wimbledon win, ads were out 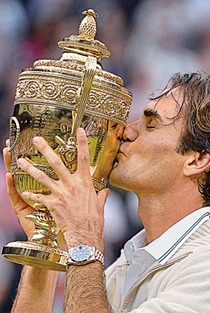 It’s safe to say that Rolex, the world’s largest luxury watch maker, has taken the art of celebrity endorsement to a whole new level. After the company’s highest-paid athlete spokesman, Roger Federer, won his seventh Wimbledon title last week, he reached almost immediately into his bag for his Rolex Oyster Perpetual Platinum watch and posed for the ultimate photo op. Not only was he holding up the Wimbledon winner’s trophy, his watch was prominently glistening on his wrist right alongside it. According to the Daily Mail, it took just one minute and 28 seconds between victory and watch fastening. Rolex wasted no time either. Minutes after Federer’s win, the company released advertisements featuring the now-famous photo, along with a slogan: “Rolex and Roger Federer. United by setting a standard to which all others aspire.” That kind of unrivalled product placement doesn’t come cheap: Rolex’s endorsement deal with Federer is reportedly worth over $10 million.