Nursing homes and long-term care facilities were not known as hotbeds of tech innovation. This Canadian company changed an entire industry’s mindset. 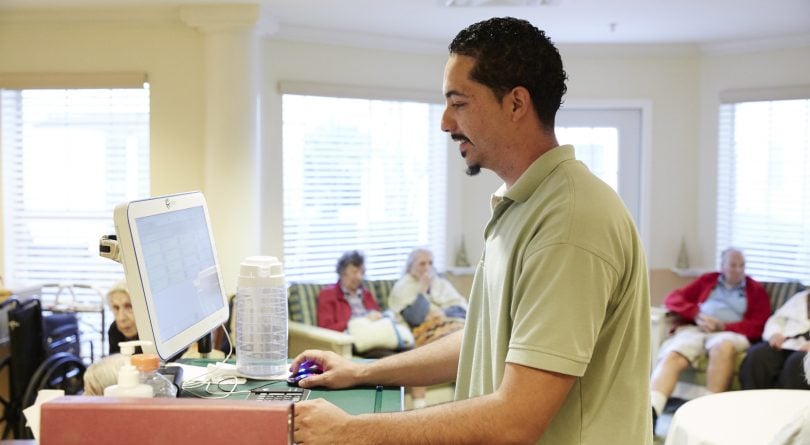 As technology soared at the turn of the millennium, the long-term care industry stayed stubbornly in the past. “People would actually print out documents, amend them and add notes with a pencil by hand, and stick them in a file folder somewhere,” says Dave Wessinger, who alongside his older brother Mike worked in the tiny portion of the nursing home and long-term care sector focused on technology. There, they saw an inefficient system rife with human errors. “We knew the market was very underserved,” says Mike, now co-founder and CEO of PointClickCare.

Technology was a hard sell in many industries, but long-term care was particularly slow to modernize. “Facilities were underfunded, technically unsophisticated—they didn’t have a single IT person on staff,” says Mike. But the problem ran far deeper than a lack of technical skills; the hurdle was ideological and psychological. This was an age before iPhones and social media, when information was something private to be owned and never shared. Overcoming that mindset was one hurdle. Simply describing their software-as-a-service model was another. “We didn’t realize it then, but we were talking about cloud computing,” says Mike. The term wouldn’t enter the public lexicon for eight more years.

Despite ample pushback, the Wessingers’ team of just half a dozen employees spent six months building their first viable version of what would become PointClickCare: a comprehensive network that allows caregivers to monitor patients’ history, medical assessments, foods, medications and schedules online. “I think of it almost like a hotel’s concierge,” says Deloitte’s Michael Runia, who worked with the firm as part of the Best Managed Companies program. “They know the pillow you want and the time you want your breakfast and everything they can to take care of you.” Unlike the Ritz-Carlton, however, the service has to be both accessible and affordable to those who need it.

Nursing homes are billed by PointClickCare per patient, with the average cost amounting to about 25 cents per day. It’s tremendous value, especially considering some patients’ medical costs amount to hundreds of dollars per day. Even so, many facilities couldn’t afford the investment. “The truth is this industry just doesn’t have the funding to pay for the technology they need—any other industry would pay double or triple for the solutions we offer,” says Mike. They can’t charge top dollar, he admits, but PointClickCare was able to get big with another approach: “The only way for us to be viable was to bring volume into play.”

For the Mississauga-based company, that meant looking far beyond Ontario and even Canada. In 2002, still in its infancy, PointClickCare took a big risk in expanding into the U.S. “Out of necessity, we had to go south of the border,” says Dave. The American long-term care market, thanks equally to larger population numbers and the country’s private health care system, is approximately 20 times the size of Canada’s. Moreover, for those who can afford them, American facilities were far more medically advanced and therefore more receptive to innovative, tech-based solutions.

RELATED: How a Canadian company that started before Confederation stays nimble

To expand PointClickCare—a slow, deliberate, one-deal-at-a-time, uphill process—the brothers spent the first few years specifically seeking out and selling to what they called “visionaries and early adopters.” Then they waited patiently for everyone else, recalls Dave. “There was a moment there when everyone paused to wait and see: Does it work? Is it successful? Can I implement it too?”

A few high-profile deals brought PointClickCare into the mainstream. In 2005, the system was incorporated into two of the five largest nursing home chains in the U.S., with facilities in 35 states between them. And as the years passed, the culture had shifted. “After 2007, it was almost like a switch was flipped,” says Dave. “Suddenly, if you didn’t have a cloud solution, you couldn’t even sell the software.” Years ahead of the competition, PointClickCare was set to sit back and reap benefits; they’re currently the market leader and used by 75 per cent of providers across nearly 17,000 facilities in North America.

The company achieved this success while remaining privately held. “There’s been some press around whether or not [PointClickCare] should be a public offering,” says Runia, “though so far they’ve been successful in retaining private equity investors instead.” PointClickCare, then and now, isn’t about the money. “It’s really not about equity,” says Dave. “It’s about doing the right thing.”

This attitude is reflected not only in the company’s approach to clients, but to its staff as well. PointClickCare’s 1,500 employees largely work remotely and enjoy many other unexpected perks. “Long before this, Dave and I worked a lot of crappy jobs. When we were in the position to do so, we set about to create an environment we’d want to work in.” The long-term care industry, admittedly, can be a gloomy and heavy gig. “We know this is a 24/7, 365-days, often thankless business,” says Dave. “We don’t want to put our team in a dark office somewhere; we want to support the hell out of them and make sure they have a smile on their faces.”

Smile-worthy perks include unlimited vacation time, flexible paid time off and even a free beer-vending machine. “I’ve seen kids stacking up free beers all week to take to the cottage on the weekend,” laughs Mike, “but who cares?” PointClickCare aims to treat employees with the same kindness and care they provide the customers—a plan working wonders on both fronts.