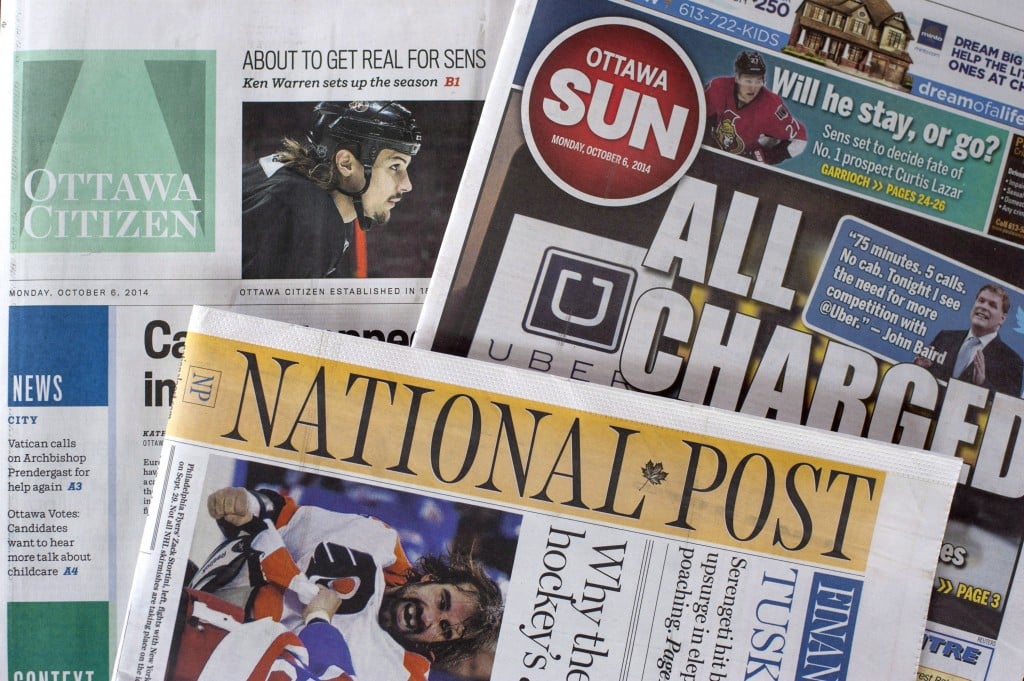 When you’re an acquisition-hungry newspaper executive preparing to go toe-to-toe with regulators in a country where media concentration has long been a dirty word, it helps to have an even scarier bad guy in the room beside you. And so, as Paul Godfrey, the CEO of Postmedia, made the rounds pitching his company’s deal to buy all of Quebecor’s English-language papers—175 titles in total, including the daily rivals to Postmedia’s papers in Calgary, Edmonton and Ottawa—he did everything he could to conjure up the image of a multi-headed beast hell-bent on destroying Canadian journalism. Devil, thy name is Google, Facebook, Twitter and Yahoo.

In presentations to journalists and analysts that were a dry run for the arguments he’ll be making to the Competition Bureau in the coming months, Godfrey repeatedly referenced “giant, foreign-owned, digital-only companies.” He also called them “behemoths of the digital world” and “foreign-based digital giants . . . swallowing digital revenue away from us.” Newspaper bosses (and magazine ones, for that matter) have long blamed Internet giants for destroying their business by stealing content and luring away advertisers, but Postmedia clearly believes that if the deal is going to get approval from Canada’s competition watchdog, it must raise the rapacious-foreigner threat level to severe.

But Godfrey knows where regulatory posturing ends and the actual business of newspapering in the 21st century begins. “Look, we’re not going to be able to compete with Google or Facebook just because of this deal,” he said. Which raises the question: What’s to be gained when one crippled newspaper company doubles down to buy another? Beyond the adage that misery loves company, the Postmedia merger with Sun Media is a transaction built on equal parts financial engineering and equal parts hopeful—or, perhaps, that should be wishful—thinking.

The optimistic argument in favour of the deal is that, in spending $316 million to buy Quebecor’s media division—which includes the Sun chain, the London Free Press, as well as scores of dailies and weekly community papers from across the country—Postmedia will extend its national and local reach with advertisers, while furthering its efforts to bring its legacy print business into the digital era. Godfrey used the announcement on Monday to promote Postmedia’s digital strategy, which will see its media properties produce unique content customized for four platforms: web, tablet, smartphone and print. He said he hoped that Quebecor’s Canoe network of websites, with its 4.3 million visitors, “will become the jewel of the deal.”

It also helps that Postmedia is getting Sun Media for a relative song. Quebecor bought the Sun papers for close to $1 billion in 1999. When then-Canwest bought the Southam newspaper chain and half the National Post the following year, the defunct broadcaster paid $3.2 billion.

Yet it’s still not abundantly clear what buying even more struggling newspapers will do for Postmedia’s long-term financial viability, beyond some short-term shuffling of deck chairs.

For the past few years, Postmedia has been shedding assets to stay afloat. It sold the Times Colonist in Victoria and nearly two dozen community newspapers in B.C. to Glacier Media. It sold a printing plant in Surrey, B.C. It sold newsroom real estate in Calgary and Toronto. It’s not a stretch to assume Godfrey is running out of things to sell, and so, by buying Sun Media, his portfolio of things to cut has been restocked.

Indeed, Postmedia said it expects to find $6 to $10 million in synergies over the next two years, at which point the ears of hundreds of ink-stained wretches across the country perked up. They’ve heard that word before. It means job cuts. And while Godfrey talked about reinvesting in some Sun publications that have already been cut “too thin,” and vowed not to close any major dailies, at least one Bay Street analyst on the conference call wondered aloud whether Postmedia was being overly “conservative” in its estimate of how much it can save by cutting. Translation: Please cut more.

The idea that Postmedia will find flab that Quebecor somehow missed with its scalpel is born out in the numbers. In its 2013 annual report, Quebecor included a figure that showed the ratio of costs-to-revenue at its news media division. Last year, that ratio was 87.5 per cent, meaning that, for every $1 in revenue, 87.5 cents went to pay employees or was spent on buying goods and services like newsprint and distribution. That ratio was down slightly from 88 per cent in 2012—in a year when Quebecor’s media division eliminated 560 positions. Postmedia doesn’t include a similar ratio in its latest annual report, but tally up the company’s employee compensation, and how much it spends on newsprint, distribution and other operating costs and its cost-to-revenue ratio was just 83 per cent. Quebecor’s newspapers are positively bloated by comparison.

Then there’s the debt. In its most recent quarter, Postmedia owed a total of $472 million. Last year, Moody’s, the debt-rating agency, lowered its outlook for the company to negative. But while the Sun Media acquisition will add about $140 million in new debt to Postmedia’s balance sheet—financing that, along with an equity investment of up to $186 million, will come from existing investors, including its largest shareholder, U.S. hedge fund Golden Tree Asset Management—the added operating income that will flow from the Sun Media properties will lower the relative size of Postmedia’s debt burden. As such, Moody’s reset its outlook for Postmedia’s debt to stable. “Despite ongoing newspaper-industry pressures, the outlook change to stable recognizes that the Sun Media acquisition is de-leveraging . . . and will enhance Postmedia’s free cash-flow-generating capacity,” Moody’s analyst Peter Adu wrote in a note.

But let’s be clear: Revenues at both Postmedia and Quebecor’s media division are falling fast. Operating income at Quebecor’s news media segment dropped more than seven per cent last year, while Postmedia saw its operating profit, not including restructuring charges, tumble nearly 10 per cent. More worrisome, Postmedia’s digital strategy is not showing signs of paying off; digital revenues have been falling in recent quarters, just not quite as fast as print revenues. Which, taken together, suggests that the deal to buy Sun Media buys Postmedia a bit more time on a clock that is fast running out.