Profit with a purpose vs. the purpose of more profits

Can clear cause marketing make the world a better place —and make companies more money? 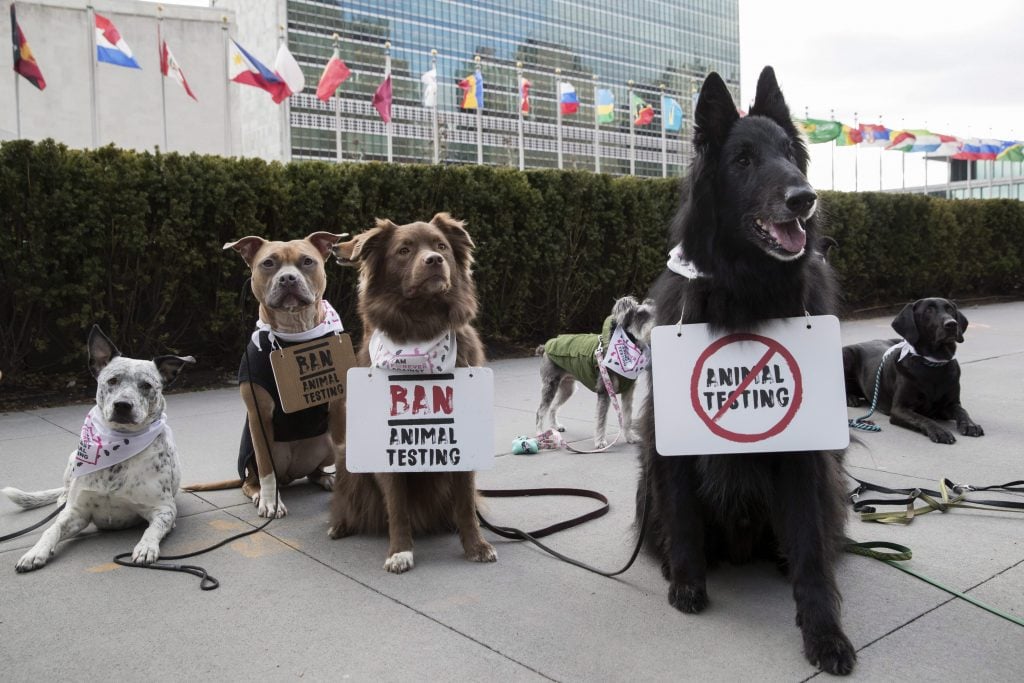 A group of dogs gather outside the United Nations Headquarters to campaign against animal testing in cosmetics on Wednesday 24 January 2018, in New York. (Andrew Kelly/AP Images for the Body Shop)

Many company CEOs historically treated “causes” as their ticket to redemption, as an easy—and cynical—way to atone for transgressions like exploiting natural resources with harmful environmental impact, exploiting workers with unfair labour practices or contributing to obesity simply by cutting a fat cheque for charity.

But cause marketing is increasingly becoming more intrinsic, where some kind of stated mission to make the world a better place becomes a recruiting tool for talent as well as a standard cost of doing business. A study by marketing consultants Kantar found that nearly two-thirds of millennials and Gen Z prefer brands that stand for something. Another study, by Cone Communications, found that 92% have a more positive image of a company that supports a social or environmental issue.

Beneath the surface it’s easy to remain cynical that these efforts are more about optics and less about making a real change. Again, studies bear this out, with a 2017 study from global ad firm Dentsu Aegis showing that up to 60% of the businesses that launched cause marketing initiatives failed to measure the impact they actually had on society.

Phillip Haid, co-founder and CEO of Toronto-based cause marketing agency Public Inc., says the concept of “profit with purpose” is slowly taking hold among business leaders, even if they’ve traditionally been uncomfortable with the idea that doing good could – or even should – positively impact the bottom line.

“If you looked at it through a charity lens, you would say ‘It should come from a very pure place,’ but you’re looking at it wrong,” says Haid, whose agency works with brands including The Body Shop, Maple Leaf Foods and Kruger Products. “We’re not talking about charity, we’re talking about social impact. They’re very different.”

Haid says that business—not government or non-profits—will be instrumental in solving longstanding societal issues like poverty, lack of access to clean water, child malnutrition, etc. His argument is simple: It’s where all the money is.

But with corporate transparency at an all-time high, businesses can no longer rely on cause marketing to perpetuate their public image. “What’s happened is that you can’t talk out of both sides of your mouth anymore,” says Haid. “If a company is doing something good over here, and something bad over there, it gets called out for the bad and it washes away the good in a heartbeat.”

At the same time, a growing number of companies are discovering that corporate social responsibility and profits no longer have to be mutually exclusive, and that consumers are willing to check their cynicism at the door. Here are three:

Like a growing number of companies, Alice + Whittle’s purpose marketing efforts are baked right into its business model. The Toronto fashion designer creates fashions “for the global citizen” and counts “the careful curation of sustainable materials” as one of its corporate principles.

The company was launched in 2013 by the husband and wife team of Sofi Khwaja and Nicholas Horekens, two former UN workers who witnessed first-hand the devastating impact that economic uncertainty can have on people in economically depressed areas.

“We realized that we could chase wars around the world for the rest of our lives, or we could proactively be on the frontlines of helping level the playing field,” says Khwaja.

They decided to focus on fashion because, according to Khwaja, it has traditionally operated with “complete immunity” in many impoverished regions.

In addition to being fashion-forward, Alice + Whittle’s $160 boots use only natural rubber sourced from farms certified and audited by the Fair Rubber Association (for which it pays a premium that goes directly to the communities whose livelihoods are directly dependent on rubber).

READ: Consumers will actually pay more for less—if you make it dead easy to buy

The company also has a relationship with a trusted, family-run factory in Horana, Sri Lanka that pays its workers a living wage and offers safe work conditions.

Tentree: Planting the seeds for renewal

Vancouver-based Tentree is a lifestyle apparel company that sells a range of hoodies, tank-tops, shorts, etc. made from sustainable fabrics including recycled polyester, tencel from Eucalyptus trees (which require one-fifth the land required to make the same amount of cotton) and hemp.

It also uses coconut buttons as an alternative to plastic, and cork from sustainably grown trees as a substitute for leather on patches, zipper pulls, etc.

The most distinctive aspect of Tentree’s business is its pledge to plant 10 trees for every item sold, with a stated goal of planting 1 billion trees in more than 10 countries by 2030.

According to its website, Tentree has had a hand in planting more than 20 million trees—including Persian silk trees in Cambodia, a combination of acacia, kapok and teak in Nepal, and mango, papaya and guava trees in Senegal.

Some companies are using purpose marketing to try and influence government policy. More than 80% of countries have no laws against testing cosmetics on animals, something The Body Shop is trying to rectify with its ongoing “Forever Against Animal Testing” CSR campaign.

READ: Uber shows how a toxic work culture can poison your brand, too

The cause is well-aligned with The Body Shop’s historic roots around ethically-sourced products.

“I think we have the right to have these conversations,” says Jayme Jenkins, vice-president of marketing and corporate responsibility with The Body Shop Canada. “The way to do [purpose marketing] in an authentic way is to find not just a cause that everybody’s talking about, but one that makes sense for your brand and you have the credibility to speak to.”

Canada currently leads all countries that The Body Shop operates in, with more than 567,000 signatures (of a stated goal of 640,000). “At the end of the day, what we want isn’t signatures, it’s to have cosmetic animal testing to be banned around the world,” says Jenkins.

Maclean’s is participating in an upcoming panel discussion on How Companies Build Relevance & Reputation in a Post-Truth World, moderated by Peter Sheahan from Karrikins Group.