Housing starts and new home prices out this morning

For a while, Canadian builders seemed not to notice that “for sale” signs on people’s lawns were lingering there longer than usual. Sales of existing homes took a dive in September, dropping 15 per cent compared to the same month last year. New residential construction projects, though, were still holding up. No longer. The numbers released today by the Canada Mortgage and Housing Corporation seem to indicate that developers have finally gotten the memo: the market is cooling. There were 17,507 actual housing starts in October, according to the CMHC, which translates to an annualized 204,107 starts—down significantly from 223,995 in September and below the 2012 average.

Now, in a sense, this is of course bad news: it shows that the housing market continues to weaken, which will likely weigh on the entire economy. But in a glass half-full reading of the data, it is also a sign that oversupply problems are likely easing.

Unless, that is, you’re in Toronto. “The monthly decrease in total housing starts posted in October was mostly due to a decrease in both single and multiple starts in urban centres in Quebec and the Prairies. Multiple starts also declined in many urban centres in Ontario, more than offsetting an increase in such starts in Toronto,” Mathieu Laberge, deputy chief Economist at CMHC, said in a statement. The condo building frenzy in Ontario’s capital, in other words, isn’t over yet.

Toronto also defied another housing statistic out this morning: Statistics Canada’s New Housing Price Index. According to the agency, prices of new homes in Canada rose for 18th consecutive month in September, edging up 0.2 per cent compared to the same period last year. The index does not include condo prices, which have been slumping in Toronto. High rises aside, though, the Toronto-Oshawa market is still far in front of all other metropolitan areas: 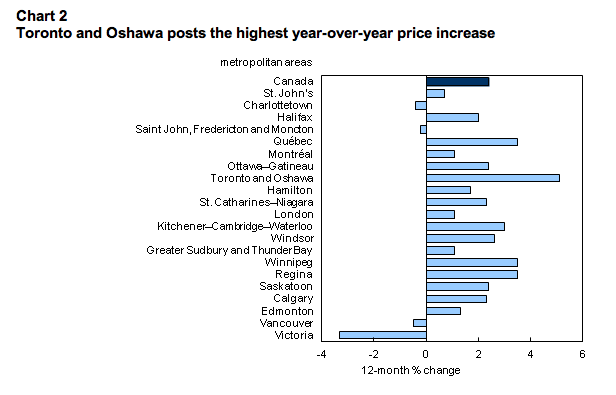