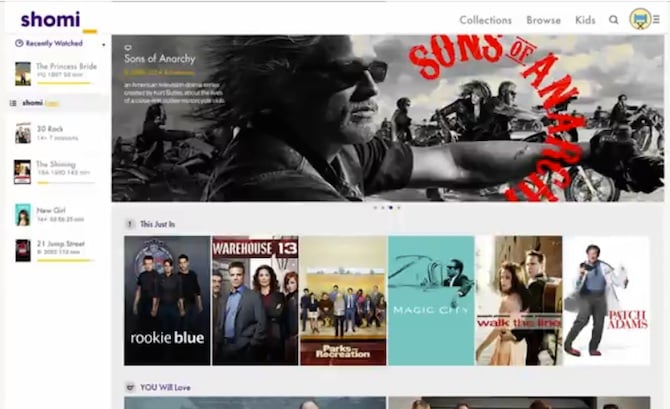 Rogers Communications is taking the fight for the future of television distribution to enemy turf: the telecom giant today launched Shomi (pronounced “show me”), a subscription video-on-demand service launching in November to compete with over-the-top services like Netflix.

A joint venture between Rogers (which owns Canadian Business) and Shaw Communications, Shomi will launch with 11,000 hours of TV shows, 1,200 movie titles and 340 TV shows ready to be streamed. And it will be available on a plethora of platforms, including tablet, mobile, online, Xbox 360 and set top boxes. The price point of $8.99 per month takes aim squarely at Netflix, which currently costs $7.99 monthly but is set to raise prices in the coming year.

Shomi seeks to harness some of the second-screen engagement that is increasingly a part of video-watching, building factoids and trailers into its functionality that users might otherwise use their handheld devices to obtain. Rogers and Shaw are stressing the advantages of the service’s curatorial approach, with suggested playlists supposedly mimicking the recommendations that video store clerks once provided. “Yes we have the algorithms, but you can’t create emotion through code,” said Keith Pelley, Rogers Media President, at the launch event in Toronto. “The approach that we’ve taken with our entertainment experts is not something to be taken lightly.”

Over-the-top service Netflix has an advantage in the fight for online eyeballs—it was there first. But Rogers and Shaw believe consumers can support more than one subscription VOD service, and Samson Okalaw argued earlier this year that incumbent Canadian broadcasters have a content edge:

In content negotiations, owning or having direct access to multiple platforms and distribution points—online, TV broadcast, pay TV, etc.—means a buyer can offer a studio a package deal for its content as opposed to rights on only one platform, which is Netflix’s limitation. Combined with some other moves this could keep consumers tied into the existing ecosystem, thus denying growth to Netflix and rendering it forever a bit player on the Canadian scene.

Rogers and Shaw are now pressing that content advantage, offering up mass titles like Modern Family and American Horror Story which run on the cable companies’ channels (Rogers’ City TV and FX Canada respectively). Existing relationships with content owners or outright content ownership makes licensing much easier, and broadcasters are likely more willing to negotiate with their peers than upstart disruptors like Netflix. Trade publication Cartt.ca reported in January that Rogers had spent $100 million on licenses in advance of the launch of its streaming service, a figure Pelley would not confirm at the launch event.

“We are major rights buyers as we speak and significant players in that game, so I think the opportunity to use that leverage and that experience and those relationships and add to it another layer of rights that can be used on Shomi is a logical extension of what we’re doing,” said Barbara Williams, Senior Vice President of Content at Shaw Media.

Rogers has already made numerous moves to shore up its consumer base by adapting to an increasing digital landscape. Taking advantage of the slew of titles it publishes (full disclosure: including this one), Rogers has joined with Next Issue Media to brings its all-you-can-eat tablet magazine service to Canada.

Cable TV subscribers, who account for just under a third of Rogers’ financial intake, are increasingly cutting the cord, preferring to get their movies and shows from streaming services. Cable unbundling, which the CRTC seems increasingly likely to enforce, would also hurt profits.The communications giants believe Shomi will complement their existing distribution services, not cannibalize them. “The fact that its offered on the set-top box is not only something that consumers were really clear with us that they wanted, but it makes it a very different opportunity than what Netflix is and it actually keeps people engaged in that cable subscription,” said Williams.

In a digital media world, content is king. Rogers has responded by betting big on the last remnant of the appointment-viewing model: professional sports. Rogers committed $5.2 billion earlier this year to win the Canadian television—and crucially, digital—rights to the National Hockey League for 12 years. The company intends to make full use of its blockbuster acquisition, televising over 500 games across its family of channels and taking advantage of second-screen opportunities for advertisers. Rogers recently made a similar, though far smaller, deal for the rights to World Wresting Entertainment events.

Where it can’t dominate the transmission, as with the TSN-owned NBA rights, Rogers is quite happy to own the properties themselves. The $1.32 billion deal for Maple Leaf Sports and Entertainment (MLSE) that ties Rogers to rivals BCE netted the country’s two biggest cable players some of the country’s biggest sports teams. While the obvious angle there is increased content opportunities, the deal is also a hedge against increasing royalty rates for sport broadcast rights.

Wireless revenue accounts for over half of Rogers’ revenue, and the company has moved to bolster its market position with a $3.3 billion purchase of spectrum earlier this year and the slashing of roaming rates. New CEO Guy Laurence has made customer service a priority as part of his “Rogers 3.0” strategy, aiming to build loyalty among users. Shomi is only the latest in a series of moves to give customers more reasons to stick around.