Starbucks says, 'no guns with your coffee, plz' (and other business stories) 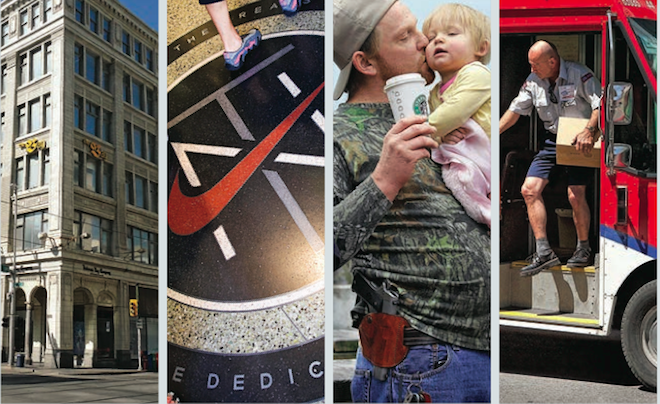 • Calgary’s downtown Hudson’s Bay store will soon boast an Oliver & Bonacini restaurant, as the chain’s makeover, which began in Toronto, continues out west. There are also plans for a lounge and event space, promising both Bay Days and nights.
• In an effort to better reflect the overall stock market, the Dow Jones Industrial Average is ditching the stocks of Bank of America, Hewlett-Packard and aluminium giant Alcoa, in favour of Nike, Goldman Sachs and Visa. The three new faces are known, respectively, for marketing, risk-taking and consumer debt. Sounds about right.
• Starbucks is asking customers not to bring handguns into its U.S. stores. In an open letter, CEO Howard Schultz explained that pro-gun activists have being using stores to stage media events, putting the firm in the middle of an “increasingly uncivil” debate.
• In its ongoing quest for relevance, Canada Post says it’s planning to roll out a same-day delivery service for online shoppers in Toronto. The Crown corporation says it has already struck deals with the likes of Wal-Mart, Best Buy and Indigo. The best part? Deliveries will be made until 9 p.m., when customers might actually be home.