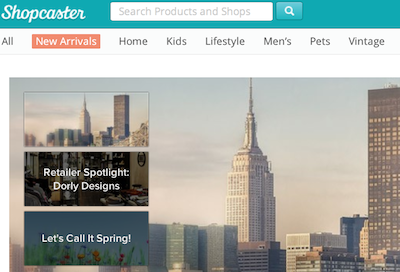 For small stores, standing out online isn’t easy. Surging Internet sales are pushing major retailers to spend big on technology to improve their web presence—$60 billion a year in the U.S. alone, by one estimate. To compete against giants like Amazon and eBay, hundreds of shops and boutiques are turning to a Canadian start-up, Shopcaster.

The site draws on the appeal of image-focused websites like Pinterest (where users “pin” photos of products they like to online bulletin boards) to help stores advertise and sell their goods online. “In the course of talking to retailers, [the Shopcaster team] found out they were having trouble with their online presence,” says CEO Judy Sims. Founders Aron Jones and Matt O’Leary realized there was a big opportunity. With an initial investment from Toronto firm Mantella Venture Partners and an additional $1-million round of financing last July, Shopcaster quickly began signing up stores, first in Toronto, and more recently, in Vancouver and Montreal.

Of the 875 stores now signed up to Shopcaster, about 200 are using the site’s “click-to-buy” service. Retailers sign up for free to use the site, but are charged a 15 per cent commission on online sales. With the emphasis on extending the feel of walking into a boutique and discovering a one-of-a-kind gem, shops such as Toronto’s Even & Odd, which sells home decor, are doing particularly well on Shopcaster. Owner Carmen Tsang says some of the shop’s bestselling items get thousands of views on the site.

Shopcaster has yet to turn a profit and faces stiff competition from sites such as Shopify, which sells e-commerce platforms to retailers, and even Pinterest, which serves as a massive window-shopping site driving sales for retailers. Shopcaster has recently expanded into the U.S., hiring a VP of U.S. Operations and adding shops from New York to the site. Cross-border shipping is now available so that customers can readily order items from any city.

After all, borders are easier to cross online. As Sims says: “World domination, that’s the plan.”