Starving the beast: What Canadian Conservatives can teach Republicans

Stephen Gordon on the fiscal cliff and Harper's quiet, and more successful, strategy

The goal of this exercise is to steadily reduce the size of government.  The idea has its origins in the US conservative movement, but US conservatives haven’t had much success in implementing it. Steps 1 and 2 work as advertised, but politicians can never get the hang of the third part.

Here is a graph generated at the Federal Reserve Bank of St Louis’ FRED database. The red line is expenditures (net of interest payments on the debt), and the blue line is revenues; both series are expressed in terms of shares of GDP: 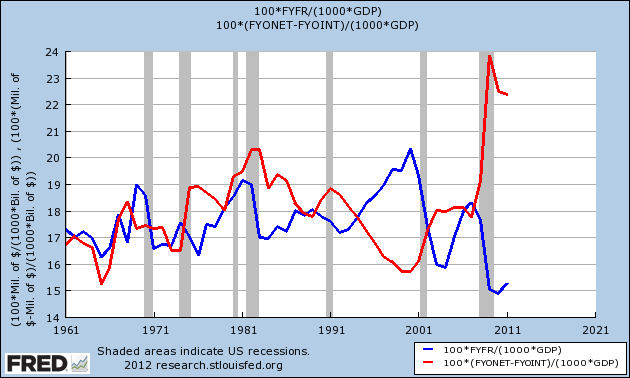 The Reagan cuts of the 1980s produced deficits, but these were eventually offset by the Clinton years’ tax increases, not by sustained reductions in government spending. (The decline in the red line in the 1990s was due more to strong GDP growth than spending restraint.)

The Bush tax cuts of the 2000s also produced deficits, but their long-term effects were mitigated by their temporary nature: this was the price of obtaining the necessary support of Democratic lawmakers. It was more or less an open secret that the goal was to make those cuts permanent eventually, but the necessary spending cuts never came.

The scale and suddenness of the scheduled tax increases (there are also associated spending cuts) is too large to simply let happen: the U.S. recovery is not yet strong enough to withstand the shock of a large fiscal contraction. But  a newly re-elected Barack Obama is unlikely to follow through on GW Bush’s original plan, and House Republicans seem resigned to the inevitability of tax increases.

Meanwhile, Stephen Harper is quietly implementing a Canadian “starve the beast” strategy, and not without success. Unlike the Republicans, the Conservatives have actually reached stage 3. Step 1 was the reduction to the GST, which created a structural deficit. After a certain period of denial, step 3 was reached in the austerity measures announced in the 2012 budget.

Federal revenues have been held below 15 per cent of GDP for four years in a row, well below the levels we’ve seen in the last fifty years. And the outlook is for more of the same.

Republicans are entering a rebuilding phase. I wouldn’t be surprised if some of them start paying close attention to how the Canadian Conservatives have managed to pull off the “starve the beast” trick that always seems to elude U.S. conservatives.