TaylorMade teams up with Reebok-CCM to make hockey sticks

Is the golf club giant's venture into hockey a game changer or a marketing ploy? 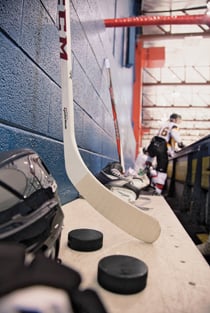 Rinks across the country—which have seen their share of consumer fads—buzzed last month with news that TaylorMade, manufacturer of top-of-the-line golf gear, was getting into the hockey-stick business. The California-based company announced a long-term collaboration with Montreal’s Reebok-CCM that both firms say will bring “game-changing equipment” to Canada’s national sport. First up: an eye-catching carbon-fibre stick dubbed the RBZ, featuring a snow-white blade.

TaylorMade cemented its reputation as a trailblazer when it introduced metal drivers to golf in 1979. It’s now the second-largest maker of clubs in the U.S., with $1.3 billion in sales last year. Analysts applauded CCM for reaching between sporting silos with the deal, but these were not strangers spotting each other across a crowded room. Both companies are wholly owned by the global sports-goods behemoth, Adidas Group—a fact omitted from their joint press release and most of the ensuing media coverage.

So are kinematics geeks at TaylorMade about to, in their words, “redefine” hockey gear? Or is this just a cross-market promotional gimmick aimed to capture momentum in the hockey market? The Adidas Group’s 2012 outlook, after all, predicts low- to mid-single-digit growth at TaylorMade, whereas Reebok-CCM is expected to achieve “strong double-digit” increases, thanks to growing interest in hockey south of the border. Marrying the two labels gets TaylorMade in front of hundreds of thousands of hockey players, many of whom also play golf.

Answering that question, alas, may require a degree in physics. Or in jargon. Benoit Vincent, TaylorMade’s chief technology officer, recently sent a mind-numbing email to GolfDigest.com explaining how the company applied golf science to the RBZ. Hockey stick blades are “analogous with the club head on a golf club,” in that they “impart the energy stored in the shaft during a player’s swing,” Vincent wrote. “By understanding how a metalwood club face is designed to maximize COR (co-efficient of restitution, or spring-like effect, the rule limiting the speed-producing potential), we drew upon this concept to develop the very first completely hollow, or air-core, structure in a blade.”

Most stick blades, he went on, are made of layers of composite skins glued to an inner core of polymer foam. TaylorMade and CCM’s team claim they have boosted the stick’s “swing speed,” and “energy at puck-release,” by removing the foam and fine-tuning the stiffness of the shaft (though they’re not ready yet to provide metrics). It’s the sort of language once heard from competitors like Easton, Warrior and Sher-Wood, who led the move from wood and aluminium to one-piece composites in the late 1990s. The results, players enthused at the time, were quicker wind-ups and higher-velocity shots.

Which is all well and good if you are Ryan Nugent-Hopkins, a puck-handling virtuoso with the Edmonton Oilers, who has been test-driving RBZ sticks in the NHL. If you’re one of the house-league pee-wees, or wheezing beer-leaguers, who comprise the bulk of the hockey-playing population, well, you might reserve judgment. Hacking, poking, chopping and slashing is humble work for a stick whose price—like the catch of the day at a high-end eatery—remains unrevealed (think top-of-market, say $300-plus, when it hits stores in August).

Glen Thornborough, Reebok-CCM’s vice-president of global sports marketing, acknowledges that elite players will get the most out of the innovations. “But there’s a strong piece of our demographic that’s interested in taking their game to the next level,” he said. “Everyone has that competitiveness in them, whether they’re mucking around on the ice with 40-year-olds or playing elite hockey at 12 or playing in the NHL. Now we’re offering a competitive advantage when it comes to shooting the puck.” Or at the very least, the sense of having one.