The best, worst and weirdest at the Detroit auto show

A wholly biased recap of 12 hours in Motor City

If you’ve never been to a car show before, and then you decide to start with the grand-daddy of them all–the Detroit auto show–it’s bound to be a little blinding, deafening, chaotic–and fun.

Packed with (mostly) male journalists, mostly in suits, plus industry execs, marketing pros and pretty women wearing big smiles, the sprawling Cobo Centre quickly begins to feel like an odd little city (there’s even an “Electric Avenue”) where there are no houses, only cars, and trucks, and giant screens. Six thousand journalists, parched and sweating under the showroom lights, dash from press conference/car reveal to press conference/car reveal (aside from those who are tucked into the swank cafe hosted by Mercedes-Benz, sipping lattes and chewing steak–on the house).

Among all the headlines-in-the-making, the auto show produces some clear winners, losers and oddities. Here’s a wholly biased recap of 12 hours in Detroit, Motor City. (All photographs by Maclean’s associate photo editor Jessica Darmanin.)

Best Reveal: I only saw a glimpse of the circus performers who glided on stage for the Infiniti Q50 reveal, but the photographs of acrobatics almost swimming in electric purple light look pretty sweet. 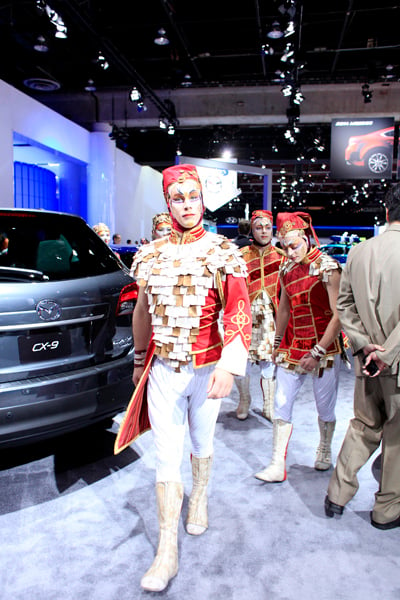 Worst Reveal: The weird choreographed pantomime that filled the Volkswagen stage before their new hybrid SUV rolled out was oddly anime-esq and utterly confusing. As were the pop-up cityscapes as props. Featuring mostly kids, it felt unhappily PG among some very sexed-up competition.

Weirdest job: The car driver/mannequin. For most reveals, the cars are driven on stage by (again) mostly men, who then sit in the car, unmoving, as it’s spun around to give the crowd a 360 degree view. They stare forward, expressionless, while the vehicle gets eyeballed by thousands of world media. And then they drive off. Who are those guys?

Most antiquated job: For my money, it’s not the shoe-shiner in the hall outside. It’s not even the period-dressed men at Ford who gave tours of the car maker’s models from the turn of the century. It was the women in tight dresses who perched gracefully beside cars and smiled for 10 hours–the point obviously being to stare them up and down as much as the car. Worst offender? Audi.

Most redundant job: The car buffer. There were hundreds of duster and cloth-armed (mostly) men paid to continuously buff a mirror finish onto what were already the shiniest, cleanest cars I’ve ever seen. 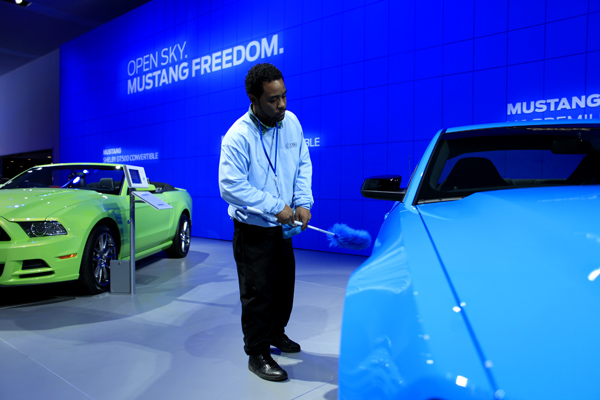 Most crowded press conference: Unsurprisingly, the 2014 Chevrolet Corvette Stingray. As the sheets were whipped off the line-up of cars (mostly white models, plus one cherry red) and they were driven onto the stage, one journalist exhaled, “I’m so excited!” even though she could hardly see it for the crowd in front. 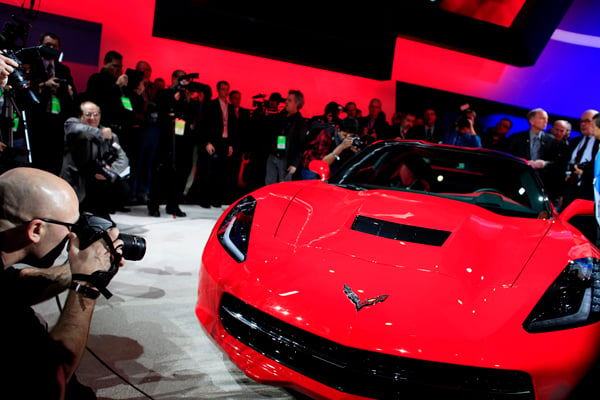 Most commonly overheard foreign language: German. Or was I just hanging out too long beside the BMW i8 Concept sports car?

Best music at a reveal: The Corvette Stingray wins again. They had the usual ’90s techno music when the Stingray actually entered centre stage, but after that tunes included Beck and the Black Key’s I got mine. Wish I did.

Weirdest marketing trick: The Nissan Motor Company set up “spritzing” areas around its display from which a green tea-inspired perfume wafted across the cars. They call it a scent, but it’s obviously perfume. And Nissan hopes to install it in showrooms across North America, winning you over by more than just sight and touch. One rep said they were inspired by Chanel, but it’s no No. 5.

Best quote from a salesman: Chief engineer of the Corvette, Tadge Juechter, when answering a question about the target market for the new Stingray: “I’ll take anyone! Anyone who can afford it.” (It’s at least $50,000 for the basic model.) 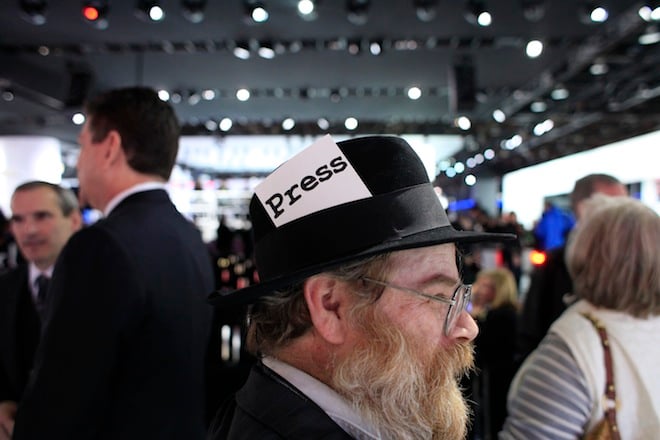 Best car colour name: Maybe “Valencia Orange” on the BMW 1 series convertible? (Named after a city in Italy, according to a product specialist.) Or was it the “Jet Stream Blue” that once graced the Corvette?

Best place to find quiet: The women’s washroom. No one in the stalls!