Don't read too much into the bond market these days, says Mike Moffatt

Is the Canadian economy improving? If you had asked me last week, I would have said the signs look good. Today, I am less sure.

Bond markets are, in my view, the most useful barometer we have on Canada’s economic outlook. Unfortunately the Canadian bond market has been jumping around like a four-year old full of sugar and it is not entirely clear why. Consider the yields on 2-year and 5-year government bonds over the last five weeks: 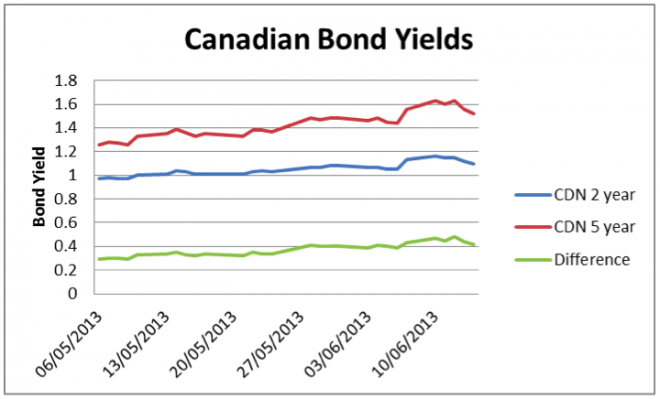 The data shows a spike in both Canadian bond yields and the steepness of the yield curve starting on May 22nd. The increase in yields and the steepness of the yield curve normally indicates an improved market outlook on the state of the economy. The yield curve steepens when economic growth, inflation, the real interest rate (through increased demand for loanable funds) and the target for the overnight rate are all expected to rise, as future nominal interest rates will rise along with them.

Unfortunately this optimism reverses on the 13th of June, with a sudden drop in both yields and the steepness of the yield curve. This instability of the yield curve is unlikely a made-in-Canada phenomenon, as yields in the United States followed a similar pattern: 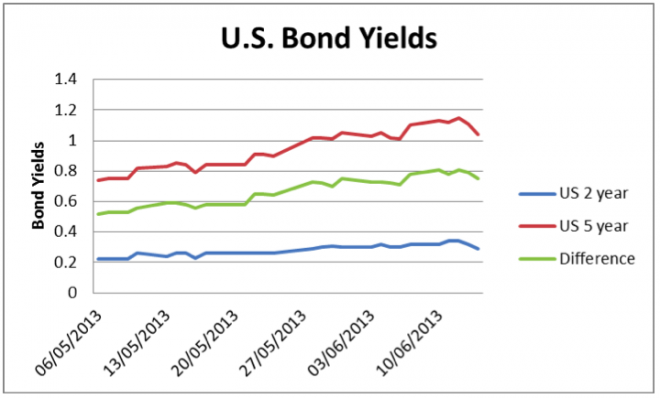 What could possibly cause this? The spike is easy to explain: on May 22nd Ben Bernanke indicated to Congress that the Fed may discuss reducing their program of quantitative easing. Evan Soltas investigated market expectations of the Federal Funds rate and discovered the market is expecting tighter money. An economic improvement with a belief that the money supply will be tightened in the medium term leads to both increased yields and a steeper yield curve.

How can we explain last week’s abrupt reversal? There was a less than stellar consumer sentiment report. But could that really cause such a sharp drop? An alternative explanation is that markets came to the conclusion they read too much into Bernanke’s testimony and tighter money is not on the way. Either way, the bears have stomped out the market’s optimism.

Those of us watching the bond markets for signs of an economic recovery feel a bit like Charlie Brown trying to kick the football. We can only hope the next steepening of the yield curve lasts and a stronger economy is on the way.