The Finance Dept. finally agrees with the PBO: it's a structural deficit

It wasn't just the recession 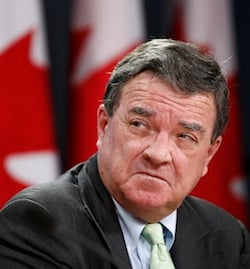 The Parliamentary Budget Office has been warning that the federal government has been running a “structural deficit” for several years now, and the Conservative government has been dismissing those warnings for just as long. Interestingly, though, the Department of Finance just came up with a new feature for the 2012 edition of the Fiscal Reference Tables, which were made public on Friday: estimates for the “cyclically-adjusted budget balance.” And they look a lot like the PBO’s estimates.

The idea behind the CABB is that governments should aim to run a balanced budget over the course of the business cycle: surpluses in expansions would offset the deficits incurred during recessions. Balancing the budget in every year would mean that governments would be forced to increase taxes and cut spending in downturns, and to do the opposite when the economy is growing quickly.

Estimating the CABB requires breaking down the budget balance into two components: the “structural balance” we would observe if the economy was operating at capacity and the cyclical factor. If the CABB is zero and there’s a cyclical deficit, then there’s no cause for alarm: the budget will balance on its own when the economy picks up. But if—as the PBO has been claiming—there’s a structural deficit, then the budget balance will stay negative even after the economy recovers.

Notwithstanding the Conservatives’ repeated rejections of the PBO claim, last year’s budget was an implicit admission that a significant portion of the federal government’s deficit was structural. If the Conservatives really believed that the deficit was purely cyclical, there would have been no need to adopt austerity measures in order to bring the budget back into balance.

The estimates released last Friday are a final confirmation of the problem. Calculating the CABB requires a certain number of judgment calls in extracting the business cycle from the trend, so no two sets of estimates will be exactly alike. But even though the PBO and the Department of Finance use different methodologies, they produce very similar estimates:

Both the PBO and the Department of Finance identify a reduction of the CABB of about two percentage points of income (Finance uses Gross Domestic Product, the PBO uses Gross Domestic Income) between 2005 and 2009, bringing what had once been a structural surplus into deficit.

This raises the question of how and why this happened. I know the opposition parties like to point to the corporate income tax cuts as the cause of the structural deficit, but there are two problems with this theory. Firstly, the timing doesn’t work: the first reduction occurred in 2008. Secondly, the revenue losses are too small to explain the movements in the budget balance.

As far as I can make out, the most important contributing factors to shift from structural surplus to structural deficit were: