The economy in February: signs of the time 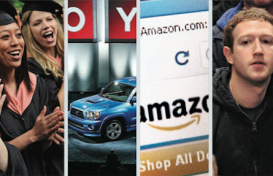 SIGNS OF THE TIMES:

• Yale: prestigious university and now, debt collector. The school, along with the University of Pennsylvania and George Washington University, has resorted to suing former grads who haven’t paid back student loans, reports Bloomberg. The money is needed to replenish loan pools for future needy students.

• Toyota recently regained its title as the world’s biggest automaker from General Motors. But it still trails in a key area: pickup truck sales. Last week it unveiled a new version of its Tundra truck, hoping to win over buyers normally loyal to Detroit brands.

• Amazon was granted a U.S. patent this month for a marketplace to sell used digital media, like movies, video games, music and ebooks. A second-hand digital market could be worth billions but will undoubtedly face fierce opposition from the entertainment industry.

• Is Facebook losing its friends?A survey by the Pew Internet and American Life Project found 61 per cent of members have, at one time, taken a break from the website for several weeks or more. Twenty per cent said they were too busy to log on.