The lessons for investors in the hype and fall of Hatchimals

Hatchimals were supposed to drive Spin Master's share price to new heights. It didn't quite work out that way. 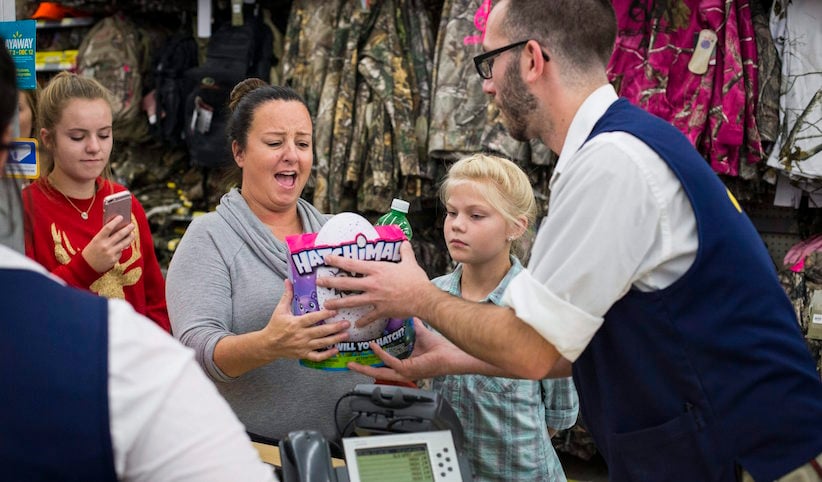 When the furry, colourful, egg-encased bane of parents known as Hatchimals first hit store shelves in October, the toy’s creators at Spin Master in Toronto hoped they had a Christmas hit on their hands. Yet even the company behind the profit-spewing Paw Patrol brand wasn’t prepared for what happened next.

As people uploaded YouTube videos of Hatchimals chipping their way out of their eggs, and Spin Master’s marketing campaign kicked in, demand for the toy exploded. By mid-November, Hatchimals were nearly impossible to find for shoppers in Canada, the U.S. and the U.K. Any store that announced it had snagged a few dozen Hatchimals quickly drew long lines of anxious parents. Spin Master reportedly began airlifting the toys in from China, since ships took too long to arrive. And as with any hot commodity these days, resellers on eBay were soon demanding hundreds of dollars, some more than $1,000, for the toys, which retail for $70.

Spin Master knew Christmas retail magic when it saw it. “People said this was going to be toy of the year,” the company’s co-founder and co-CEO Anton Rabie told Money. “But there’s a difference between toy of the year and the biggest phenom in decades.” Analysts were just as effusive. “It’s not just hype,” toy analyst and CEO of Klosters Trading Corporation Lutz Muller told BNN. Investors listened, driving up Spin Master’s share price by nearly 25 per cent.

Now, it seems, a Christmas hangover is setting in. Stories have abounded of Hatchimals failing to hatch. Some parents have complained their children find the toy boring once hatched.  Others even claim their Hatchimals swear in their sleep (though if you listen to the videos it sounds more like the regret of parents who wasted hours of their lives and potentially hundreds of dollars acquiring a fake bird). All told, Spin Master’s stock price has fallen 15 per cent since its November peak. As Lyle Stein, senior portfolio manager at Vestcap Investment Management, told BNN, “You buy on rumour, you sell on news. And now the news is coming out and it’s disappointing.”

Yet more than a month ago there was one warning sign that all was not well in Hatchimal-land—and by extension, for those investors banking on a windfall for Spin Master—and that was the trend of people searching on Google for the toy. Google’s trend tool shows search interest soared before peaking on Nov. 25, which was Black Friday. Search interest in “Hatchimals” then fell sharply, and aside from the occasional blip, continued its downward trend throughout the hectic Christmas shopping season.

Which was more or less the trajectory of Spin Master’s share price.

For what was supposed to be the hot toy of Christmas 2016, the mounting indifference of the googling masses stands out. For instance, searches for “Lego” and “Barbie” also saw a big spike around Black Friday, but continued to climb in the lead-up to Christmas, rising sharply with each weekend as shoppers flooded the malls and online retailers.

Indeed, searches for “Hatchimals” were eventually overtaken by those googling for Spin Master’s Paw Patrol brand just before Christmas.

So what went wrong?

The inability of Spin Master to meet demand seems to have been a key turning point. It appears many parents gave up the hunt. Tales of people hoarding Hatchimals for resale didn’t help either—such as Water For Elephants author Sara Gruen, who bought $23,600 worth of Hatchimals on eBay after Black Friday with the goal of reselling them to raise money for the legal fight for a man in prison. (She eventually sold the toys for a $6,000 profit.)

For investors, the Hatchimal craze was a reminder of the dangers of chasing a hot stock. Just because Spin Master had a hit on its hands, it wasn’t clear the toy would boost Spin Master’s earnings enough to justify the valuation investors were placing on the stock. Indeed, it appears the company has incurred additional production, delivery and customer service costs as a result of Hatchimania that could eat into its bottom line.

The Great Hatchimal Boom of Christmas 2016 also illustrated once again the potential predictive power of Google, something investors are already exploring—though the jury is still out on this as a reliable investing strategy.

The risk for Spin Master now, as it attempts to turn Hatchimals into a long-term winner, is the apparent backlash against the toy. While the company was clearly caught off guard by the toy’s popularity—and lost out on untold millions of dollars in revenue—the perception no doubt exists among those parents who missed out that Spin Master restricted the supply of Hatchimals on purpose in order to drive demand to manic levels. Spin Master will have to overcome that sentiment, as well as complaints on social media that some of the toys malfunctioned.

Don’t count Spin Master out, though. The company has a diverse and growing portfolio of TV shows and toys (it recently acquired Etch-a-Sketch) and a remarkable track record of expanding on its successes; you can expect new variations of the Hatchimal technology. Hatching dinosaurs, anyone? There’s always next Christmas.