The race is on to build a better battery 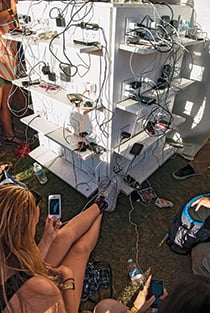 Eagle-eyed Apple fans noticed something unusual when the company released the third generation of the iPad in the spring of last year. The device was actually thicker and heavier than its predecessor—seemingly a step backward. The culprit was a 70 per cent increase in the size of its lithium-ion battery packs, needed to power the new iPad’s higher-resolution display and faster processor, while still offering the roughly 10 hours of battery life users had come to expect.

Such trade-offs are becoming increasingly common, thanks to a dearth of battery innovation that threatens to hold up further mobile innovation. While Moore’s law observes that the number of transistors on a silicon microchip can be doubled every two years, cramming more computing power into an ever-shrinking space, the last major step forward in rechargeable batteries occurred in the early 1990s, when the first lithium-ion cells were introduced. Since then, engineers have gone to great lengths to find ways of powering new mobile features—touchscreens, video cameras, ultra-bright displays—using roughly the same amount of juice. “The batteries have improved maybe by a factor of 2.5, while the power consumption of devices has probably been decreased by about 20 times,” says Jeff Dahn, a battery researcher and professor at Halifax’s Dalhousie University.

But there’s a limit to how far power-rationing can go. And these days, rechargeable batteries are being called on to light up far more than just feature-rich cellphones and tablets. They are also being used to power automobiles and the critical on-board systems of jetliners such as Boeing’s new 787, where the price of failure is much higher. Merely stringing together more lithium-ion cells to achieve the necessary oomph isn’t without risk, either. Boeing was forced to ground its entire fleet of 787s earlier this year after a series of fires were traced to the plane’s battery packs. Similarly, two people were taken to hospital last year after an electric car battery exploded in a General Motors lab.

Why does it seem so hard to build a better battery? For one thing, batteries are based on chemistry, meaning researchers are somewhat limited by what they find in the periodic table. By some estimates, today’s rechargeable batteries are only about eight times more powerful than the very first lead acid battery invented by Gaston Plante in 1859. And, according to Dahn, a further threefold improvement is probably the best researchers can hope for. “Now, some people wouldn’t consider that a quantum leap, but in batteries, it is,” Dahn says. “Even 25 per cent is a big deal in the battery business.” And, despite the money now being poured into battery research, even that could prove far more difficult to achieve than most people imagine.

Last fall, the U.S. Department of Energy said it was spending $120 million to create a new Joint Center for Energy Storage Research, or JCESR, comprised of five universities and five national labs. Based at Argonne National Laboratory in Lemont, Ill., the project even has a catchy mission statement, promising to develop batteries that are “five times more powerful, five times cheaper within five years.” Yet, those involved in the project are quick to point out that it’s more of a rallying cry than an actual goal. “That’s an incredibly high bar,” says Linda Nazar, a chemistry professor at the University of Waterloo and the Canada Research Chair in solid state materials. “We know that.”

At its most basic, a rechargeable battery works by moving ions back and forth between an anode and a cathode via an electrolyte. In the case of lithium-ion cells, a lithium transition metal is used for the cathode, and graphite is used for the anode. During discharge, lithium ions are released from the anode and move through the electrolyte to the cathode, simultaneously releasing an electron that creates a current that powers whatever device is connected to the battery. When plugged into a wall outlet, the process goes in reverse.

In theory, the most powerful battery should be one that’s made from the most reactive elements: lithium and fluorine. But building a battery out of elemental fluorine, which can react explosively with a wide variety of substances, would be extraordinarily difficult, if not impossible. So battery researchers are left trying to find more suitable compounds that still offer the desired characteristics in energy density (how much energy can be stored per unit of volume), voltage and overall stability of the cell. To further complicate matters, they must also contend with a host of unwanted chemical reactions that can cause cells to degrade over time, which is why rechargeable batteries eventually die completely. “What helps you in terms of the high energy of these molecules also hurts you,” says Venkat Srinivasan, a battery researcher at Lawrence Berkeley Lab and the deputy director at JCESR.

The reason lithium-ion batteries became so popular is that they seemed to offer the fewest trade-offs. Compared to nickel metahydride and nickel-cadmium batteries, they boast a relatively high energy density, no cell “memory” (where a periodic complete discharge of the battery is necessary to maintain its full capacity) and a low rate of self-discharge when not in use. But lithium-ion batteries have their disadvantages, too. They are prone to overheating—hence the stories of cellphones and laptops that spontaneously combust—and tend to age quickly, with most having a lifespan of about three years.

Lithium-ion’s downsides have become a particular headache for makers of electric cars. The Chevy Volt’s image suffered after GM was forced to recall 8,000 vehicles in 2012 after crash tests resulted in battery-related fires. As for degradation, the solution all automakers have come up with—bigger battery packs—has only seemed to add to the risk. “When the car is new, you promise buyers a certain amount of electric range. For the Chevy Volt it’s 60 km,” Dahn says. “But when the car is eight years old, you still promise that 60 km of electric range. The problem is that, throughout the lifetime of the car, the battery is constantly degrading. That’s why you have a 16-kW-h battery in the Volt, even though, when the car is new, you only need nine (kilowatt hours).”

Figuring out a way to extend the life of a lithium-ion battery is key. But it’s a painstakingly slow process of trial and error. “We know that just adding a pinch of a certain chemical to the electrolyte can have amazing impact on a battery’s lifetime,” Dahn says. “But why? And how long is it going to take for us to evaluate the others and the multitudinous combinations of them all?” In an attempt to speed things up, Dahn has developed a system that allows automakers to test different “recipes” of battery materials to see how they’re likely to perform over the lifetime of a vehicle. So far, GM and Magna International’s electric car division have signed on to use the system. At JCESR, meanwhile, researchers are using supercomputers to comb a giant database called the Materials Project in search of promising substances that could be incorporated into future battery designs.

But what if lithium-ion batteries simply aren’t sufficient to meet the world’s future energy storage needs? “Most of the battery people have concluded we can double the energy density of what we have today,” Srinivasan says. “The problem is that doubling may not be enough.”

Many researchers at JCESR and elsewhere are therefore also exploring other battery types that, if successful, promise to leapfrog lithium-ion on a number of fronts—perhaps even one day rivalling the energy density of fossil fuels. (Gasoline has an energy density that’s roughly 100 times that of a lithium-ion battery.) One line of inquiry looks at elements like magnesium, which carries a two-electron charge compared to just one for lithium, adding that much more energy potential. But there’s a catch. The ions don’t move around as easily inside the cell, suggesting that new electrolytes and electrodes will need to be found.

Another area being explored is the use of cheap, abundant elements such as sulphur and oxygen. That includes the lithium-air battery, an idea that has been kicked around for years. The attraction is that the battery would be extremely lightweight, since the oxygen in the cell would come from the air. More important, it boasts a theoretical energy density rivalling that of gasoline. But while IBM has built a prototype, and other permutations such as sodium-air and zinc-air are being explored, most experts believe it will be years before such batteries could be rolled out commercially, if at all. “There are a lot of side reactions that occur in this cell,” says the University of Waterloo’s Nazar.

Dahn has a different vision. Instead of abandoning lithium-ion cells completely, he believes there’s a way to make them more powerful by charging them beyond their current 4.2-V maximum. “Many of the positive electrodes can still have a lot of lithium in them at 4.2 V, so if you can charge them to 4.7 V, they will give you about 50 per cent more capacity and energy,” he says. There is, as always, a caveat. “The electrolytes in the cells don’t like being exposed to these highly oxidizing surfaces when the voltages go above 4.2 or 4.3 volts,” Dahn says. “We just need to fix this one nagging and very difficult problem and then we’re there.” In the meantime, don’t expect your iPad to get any thinner.