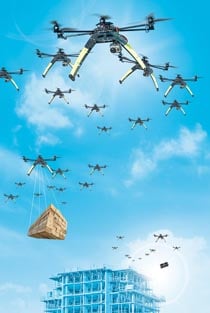 If you want a glimpse of the future of robotics, and you can’t get a tour of NASA’s Ames Research Center, try spilling some lunch on your backyard patio. Depending on time of year and location, the inevitable brigade of ants will materialize, their seemingly random movements growing increasingly co-ordinated as they lug bits of their bonanza away in a martial column—a marvel of low-tech efficiency.

Back in the early 1990s, this scenario inspired a far-fetched idea: what if machines could be taught to do the same thing? A large population of relatively simple robots could “swarm” a task we humans would rather forego, like cleaning a banquet hall. Or mining a coal face. Each could be designed to accomplish the most rudimentary functions, robotics experts theorized, such as gathering, carrying and dropping. They’d be equipped with the capacity to share limited information like the quickest routes, or the location of the next payload.

Many a scientific career has run aground on the task of mimicking nature, but that imagined future is now within sight. Four months ago, a Canadian computer science professor named Andrew Vardy posted footage on YouTube of toy-sized robots he’d modified to sort plastic pucks randomly placed on a surface the size of a dining table. Over 29 minutes, the devices (they look a bit like tugboats) buzz around their miniature arena, grabbing the pucks and carrying them away. Vardy, who teaches at Memorial University of Newfoundland, is not the first researcher to model mini-bots on insect behaviour. Small vehicles equipped with infrared sensors have been taught to hunt, gather and store in laboratories around the world. But Vardy did add a notable wrinkle: his robots could “see” through tiny on-board cameras. By the end of the exercise, they’d sorted the pucks into tidy clusters of red and green.

His experiment counts among a series bringing us closer to a day when robots, simple and complex, are part of our daily lives. For decades, engineers and sci-fi writers have forecast a time when autonomous machines would become enough like living creatures to share our homes and work spaces, performing the “three Ds” of human labour—dirty, dangerous and difficult. In doing so, they would unleash a productivity boom, and the visions run from the banal to the inspiring. Human-sized robots might work assembly lines cheek-by-jowl with people. Small submersible ’bots might swarm a contaminated canal, hoovering up toxins and heavy metals. “If you really want to stretch the imagination,” says Vardy, “you could envision injecting very tiny robots into someone’s bloodstream and get them to aggregate undesirable particles, and get [contaminants] out.”

These ambitions were hobbled, though, by a rudimentary problem: the living world’s inherent chaos. Without the capacity to respond to random changes in its environment, a robot could be stymied by objects as commonplace as discarded cardboard dropped in their path.

Then there was the challenge of getting autonomous machines to work together. Until very recently, robots used in industry required command-and-control by a central computer, their every movement planned and intricately coordinated. The coming generation of robots are expected not only to “learn” their tasks, but to collaborate with each other in pursuit of efficiency and a common goal. “It’s not super-exciting learning,” says James McLurkin, a computer science professor at Rice University in Houston, and a leading expert on swarm robotics. “They don’t walk up to you and say your name. But without it, you couldn’t coordinate 1,000 robots.”

The solutions are coming, though, and as in practically every facet of human enterprise, they’re arising from Silicon Valley. The ongoing explosion in microprocessing capacity has allowed researchers like McLurkin to equip robots smaller than a hamburger with enough chip space to execute a combination of tasks: following a leader, escaping deadlocks and even clearing a floor littered with bread crumbs. Swiss roboticists programmed a squadron of flying “quadrotors” last January to build a six-metre tower in a Paris art gallery, one foam brick at a time. Video of the feat is part of an Internet meme featuring the dragonfly-like aircraft, which are equipped with four propellers and capable of omni-directional movement. Quadrotor teams can be seen doing light shows, navigating obstacle courses and—chillingly—ferrying around a submachine gun.

In many ways, they represent the fantastical edge of possibility in robotics. If flying robots can raise a six-metre tower, why not a skyscraper? Or a drilling rig on the Beaufort Sea? The more prosaic applications are already making their way into the marketplace. A Massachusetts company called Kiva Systems has been selling an automated warehousing system since 2005, in which hundreds of orange robots the size of coffee tables whip merchandise from storage to shipping bay. Orders are controlled from a central computer, and the so-called “drive units,” which shunt goods around on columns of metal shelving, communicate with each other by wireless signal, ensuring high-demand items are stored closest to the loading area.

The system is said to triple distribution productivity, and has been adopted by a host of big-box retailers, including Staples, Best Buy and Crate & Barrel. In March, the online shopping giant Amazon announced it was buying Kiva for US$775 million.

If scientists can pack so much utility into such a compact package, how long before the larger, android-style robots as envisioned by George Lucas debut in our factories and offices? That’s the easiest model for most people to picture, thanks to Hollywood. Alas, marrying the digital and human spheres has been no easier for droid makers than for swarm enthusiasts. Humanoid robots built in recent years have simply been too expensive to bring to market, which has restricted the field to military-funded experimental programs, or corporate giants like Honda, which developed a droid-style robot prototype named Asimo as a stunt to promote its car brand.

Enter Baxter, the first commercially available humanoid robot meant for industrial use. Covered in impact-friendly red rubber, and equipped with a computer-screen face, the gangly machine has set the technology world abuzz since its unveiling this summer, because of its unprecedented adaptability (the “it” is intentional; Baxter’s makers are not into anthropromorphizing). A person can program Baxter by simply taking hold of its 11-joint arms and performing a desired task, such as plucking items off a conveyor and placing them in boxes. Baxter can also adjust to unforeseen events, say officials at Rethink Robotics, the Boston-based company that began shipping him last week. If it drops an item, it stops and picks up another. If a human gets in its way, Baxter grinds to a halt instead of serving up a flying elbow.

Rodney Brooks, the founder of Rethink and Baxter’s de facto father, credits a series of advancements for bringing his robot to reality, from the advent of cheap microprocessors to the development of new, lightweight materials. The digital photography technology pioneered by the smartphone industry might be the most important of all, he says. Baxter’s sensor array includes five such cameras that allow it to “see” objects he’ll be handling, and stop when something crosses his line of vision.

These breakthroughs made Baxter light and adaptable. More importantly, they drove down its price. At $22,000, Baxter retails for about the cost of a company car—software upgrades included. “We didn’t try to design a robot that can do everything, then figure out how much it would cost,” Brooks explains. “Instead we designed it with cost in mind. We worked with suppliers to understand what their technologies and capabilities would allow, and what our design constraints were.”

Brooks, a former Massachusetts Institute of Technology professor, speaks from a position of authority. His first company, iRobotics, brought the world the Roomba, an autonomous vacuum cleaner capable of cleaning while a homeowner isn’t even in the house. The firm’s genius was to price the device at $200, far below an Electrolux model already on the market in Europe, ensuring millions would sell worldwide. Today, iRobot is credited with putting consumers at ease with the idea of autonomous machines in their midst. YouTube is chock-a-block with videos of laughing babies riding Roombas as the vacuums do their work.

Yet friendly as Roomba seems, robots retain their capacity to stoke our most atavistic fears. For every friendly android like C-3PO, after all, pop culture can offer a platoon of marauding killer-bots whose impassive efficiency raises the neck hair (The Terminator). Or some dystopian world of people dehumanized by the machines around them (Wall-E). Real-world roboticists spend a lot of time grappling with a hypothesis known as the “uncanny valley,” which holds that people are revolted by robots that act almost, but not perfectly, like humans.

All of which raises the question of how eager, or ready, we are to welcome them to our midst. While Brooks has been striving to portray Baxter as a tool that will repatriate U.S. manufacturing business lost to Asia (even Chinese workers can’t toil for free), his invention has unleashed a wave of dread among those who believe it will kill assembly-line positions in America and abroad. “We have reached peak jobs,” one glum commenter declared after reading about Baxter on Forbes.com. “From here on out, total employment is only going to go down.”

The American futurist Thomas Frey recently predicted that two billion jobs worldwide would fall to robots by 2030—about half the employment on Earth. Among the doomed occupations: fishermen, farmers, miners and soldiers. The question, then, is what sort of jobs will replace them, and on this front most prognositicators remain upbeat. Frey imagines a world where millions are employed as robot designers, engineers and dispatchers. “It’s not intended to be a doom-and-gloom scenario,” he says. “It’s more like a wake-up call. We’re going to be transitioning the jobs we have, so we’ll need to train people in the skills for the new world that’s about to come.” Brooks points to history, noting the boost in productivity that has accompanied every technological advancement. “The PC didn’t get rid of office workers,” he says, “but it changed the jobs that office workers did. I see that as the analogy here.”

The good news is that there’s time to adjust. Richard Vaughan, a computer scientist at Simon Fraser University in Burnaby, B.C., notes that researchers have yet to find a compact energy source capable of powering swarm robots on their imagined missions. Machines like Baxter, meanwhile, will need years of software upgrades before they can replace the dexterity and judgment of assembly-line workers. That’s why Vaughan sees a future in a hybrid of the two models: robot teams comprised of machines smart enough to perform a number of tasks well, yet simple enough to mass produce. “The one thing that’s getting cheaper is computation,” he says. “What you might see is relatively smart robots working together, and that’s different from the traditional, minimal [swarm] system, where the robots have a handful of rules they follow mechanically.”

Whatever shape they take, the dreams of technology’s prophets are undeniably in the offing. Last month, a California-based company announced it would spend $3.1 million to develop farm robots capable of weeding lettuce crops. A Japanese engineer named Akira Mita has proposed buildings in which swarm robots follow the occupants from room to room, adjusting temperature, humidity, lighting and music according to the person’s mood. That might not be everyone’s ideal of how humans should relate to machines: mini-bots that monitor our mood are just a wee bit creepy. But it’s proof enough that the future-gazers were right, and a good reason to watch one’s potato salad the next time it spills on the deck.

And here’s Erica Orange, futurist with Weiner Edrich Brown (WEB) on the rise of non-carbon life forms and taking language beyond the human realm: