The shadow banking sector has been feasting on government-insured mortgages

Danger lurking in the shadows?

The practice of packaging government-insured mortgages into securities has grown “substantially” since 2007 and such investment tools constitute the largest component of the so-called shadow banking sector—i.e. non-bank institutions that perform some bank-like functions—the Bank of Canada said yesterday in a new report. It’s one development, among others, that merits “focused monitoring” because it could pose a risk to the stability of Canada’s financial system, the BoC concluded in a study attached to its semi-annual Financial Stability Review.

Mortgage-backed securities (MBSs), which use a single mortgage, or a pool of them, as collateral, were the main vehicle through which financial contagion spread throughout the U.S. when housing prices started to fall and home-owners, especially those who’d taken out subprime mortgages, began to default.

As the chart below shows, in Canada, MBSs backed by government-insured mortgages (in yellow) have grown exponentially in the shadow banking sector, which is more lightly regulated than the banks, over the past six years. What are government-insured MBSs, you ask? Here’s a bit of background. Canadian law requires that bank-originated mortgages with down-payments of less than 20 per cent of the value of the house carry insurance, which is provided mainly by Canada’s Mortgage and Housing Corporation. (The point of this is to allow Canadians who can’t afford a 20 per cent downpayment to get a mortgage, and at the same time protect the banks against the risk of borrower default, which is higher for loans with low downpayments.) However, mortgage issuers can also take out insurance on pools of safer mortgages (with down-payments of 20 per cent or higher) if they so choose. The latter practice, as analyst Ben Rabidoux wrote some time ago on Econowatch, has become increasingly widespread since the financial crisis.

Once they’ve combined a number of conventional mortgages into an MBS, mortgage issuers (be they banks, trust companies, credit unions or other qualified lenders) then sell it to investors and can use the money to make other loans, including new mortgages. MBSs backed by government insurance currently make up about a third of all outstanding residential mortgage credit in Canada, up from one-fifth, the BoC said.

But why take out government insurance on those MBSs? Because it’s a cheap way to borrow. MBSs can be packaged into bonds, which are popular with investors because they are backed by collateral that’s insured by the government. If home owners default on their loans, the CMHC steps in to guarantee continued payments to bond holders. For investors the risk of lending money and not getting it back is virtually nil, which is why they’re willing to demand small returns, which, in turn, makes all this a low-cost way for MBSs-issuers to get financing.

While MBSs linked to government-insured mortgages are attractive for banks too, they are particularly so for smaller, not well established financial institutions that don’t take deposits and would have to reward investors with high returns were they to borrow by issuing their own bonds. Insured MBSs “allows these lenders to raise funds at a much lower cost than they could on their own, permitting them to compete with larger, more highly rated mortgage providers,” BoC analysts wrote.

Now for the good news. Despite the growth in mortgage-backed securities, the BoC analysts wrote in the report, the relative size of Canada’s shadow banking sector has been shrinking since 2008. It is now about 40 per cent of the traditional banking sector, down from an average of about 50 per cent between 1998 and 2008. Also, Canada’s non-bank players are still minnows compared to their counterparts in the U.S. The size of our domestic shadow banking was about 40 per cent of Canada’s non-inflation adjusted GDP at the end of 2012. South of the border, it was a whopping 95 per cent of the U.S. nominal GDP as of the end of 2011. 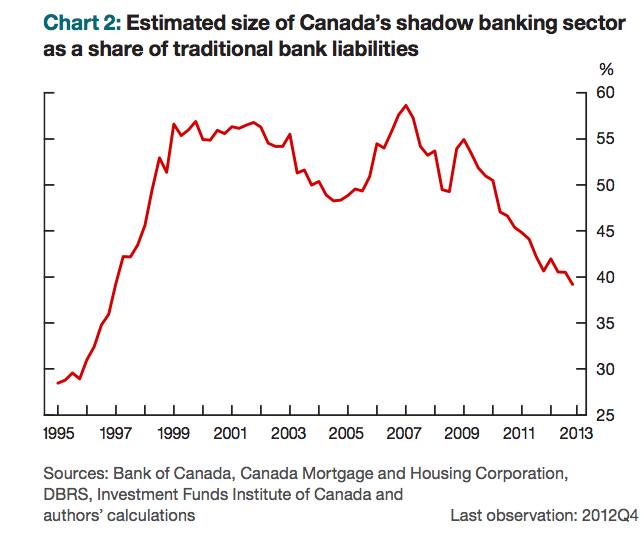 That said, the share of government-insured MBSs issued by entities that are neither regulated like the banks nor overseen by Canada’ financial watchdog (the Office of the Superintendent of Financial Institutions, or OSFI) has been climbing considerably in the last five years. In the chart below, that’s the blue segment: 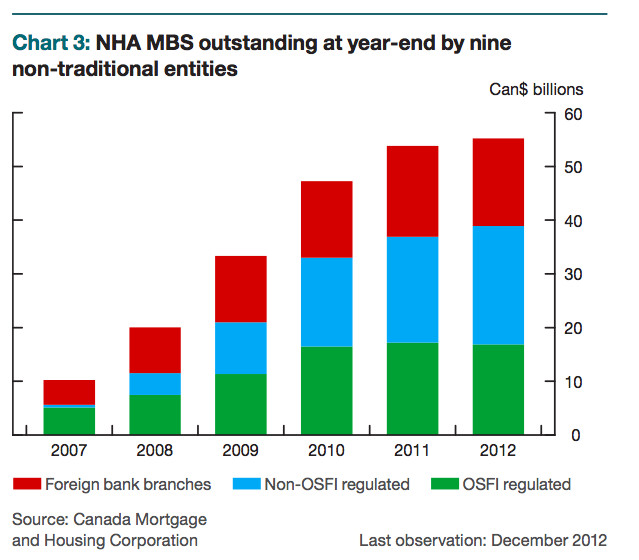 As I said, in the U.S. the trouble with MBSs started when mortgage defaults suddenly changed investors’ perceptions of just how safe those securities, which were often rated AAA, were. People began fleeing MBSs en masse, the securities’ prices plummeted and forced lender to take outsized losses. We all know how things unfolded after that.

Fortunately, according to the Bank of Canada, there’s no need to worry about a repeat of such a scenario in Canada. The risk of investor panic would be particularly severe for the shadow banking sector, which relies on MBSs much more heavily than banks, but the threat is “largely mitigated” by the fact that the government has promised to step in if home-buyers stop making payments.

Still, the growing stock of government-insured mortgages and insured mortgage-backed securities means the government’s liability in the mortgage market has ballooned. This increases the government’s exposure to risks posed by a potential housing correction or Canadians’ high levels of indebtedness, the study warned, risks that the BoC itself yesterday assessed as “elevated.”

In other words, if something goes wrong, and it might, taxpayers could be on the hook—big time.