The trade deficit (or rather, current account deficit) is now the second-widest on record

That's neither surprising nor terrible news

Canada’s current account deficit grew to $18.9 billion between July and September, up from $18.4 billion in the previous quarter, Statistics Canada reported today. It was the second-widest deficit on record.

Now, the association of the words “deficit” and “widest” sounds like very bad news. But before you start pulling your hair out, let me point you to this piece by Stephen Gordon on Econowatch about how a current account deficit doesn’t necessarily spell doom for economic growth. You might also want to look at this other post by Stephen, and particularly his chart showing how, once you plot the current account balance as a share of the economy, the current deficit levels, while still large, are not at record levels.

Having cleared the air on that one, let’s take a look at today’s release and whether it really contains anything we should worry about.

I’m going to look at the trade balance first (the different between exports and imports) and then focus on net income flows (the difference between profits earned on Canadian investments abroad and those on foreign-owned investments in Canada) as per the current account equation, which goes like this:

Here’s today’s release in a nutshell:

a) Trade in goods: The difference between goods exports and imports increased to $4.8 billion during the three months to September, up from $3.6 billion in the previous quarter. In absolute terms, both exports and imports decreased, but the first more so than the latter. The value of our exports shrunk by $3.7 billion compared to the prior three-month period, to $112.7 billion. This was mostly because of a reduction in commodities exports, and chiefly oil. In general, though, most export categories either recorded declines or were unchanged. It was the third consecutive quarter in which the aggregate value of Canada’s exports went down.

We’re registering a deficit here as well, but between July and September it shrunk. The difference between profits earned by Canadian investors abroad and profits earned by foreign investors in Canada was $6.3 billion, down from $7.5 billion in the previous quarter. Both flows grew, but Canadians increased their holdings of foreign securities a bit faster, thus shrinking the gap between the two.

It’s interesting to note that foreigners’ appetite for Canadian securities, and particularly government bonds, is still alive and well nearly four years after the apex of the financial crisis in 2008: 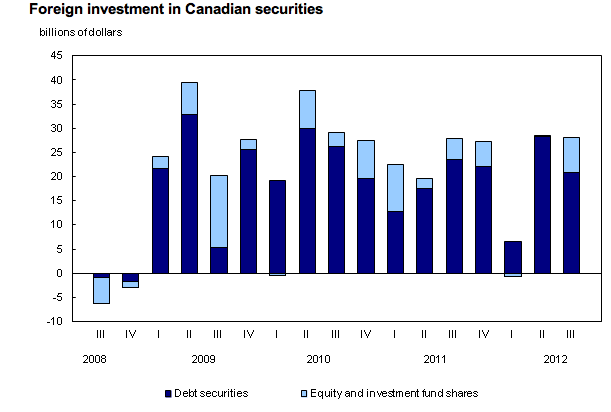 Also intriguing is the fact that Canadian investments abroad, which made the largest leap in three year, advancing to $8.9 billion last quarter, were mostly in the U.S. stock market. It’s an important sign of confidence in both the U.S. economy and the stock market.

What to make of all this? To be sure, it’s not great news, but it’s not terrible news either. And it certainly isn’t a surprise. With the global economy slowing and commodities markets cooling, exports were bound to suffer. This is likely to weigh on the economy as a whole—not because a trade deficit is necessarily associated with slow growth, but because the domestic economic engines that have propelled the Canadian GDP up to now, i.e. consumer spending and the housing market, are running out of steam. Without them, we do need export growth.

Lucky for us, that might soon happen, for two reason. First, as TD’s Leslie Preston wrote in a client note this morning: “Looking ahead, the trade picture should brighten in the second half of next year as the U.S. economy gains momentum, lifting demand for Canada’s exports.”

Second, cooling commodities markets, our wider and wider current account deficit and slow domestic growth might soon make the loonie less palatable to foreign investors. Sure, grumblings about the Canadian dollar being overvalued are not new, but they have intensified of late. CIBC’s Avery Shenfeld wrote earlier this week that “despite continued capital flows providing loonie support, trade fundamentals continue to point to an overvalued currency.” And a Deutsche Bank trader told the Financial Times yesterday he believes that seeking refuge from market uncertainty in the Canadian dollar is now an outdated strategy: “That’s legacy thinking of 2009, post-crisis, when the Canadian economy was clearly in far better shape than the US economy.”

Well, bring it on. A depreciation of the loonie would give our exports a boost just when we’re starting to really need one.