Things are looking up for Toronto's condo market

Why all this talk of a crash is exaggerated 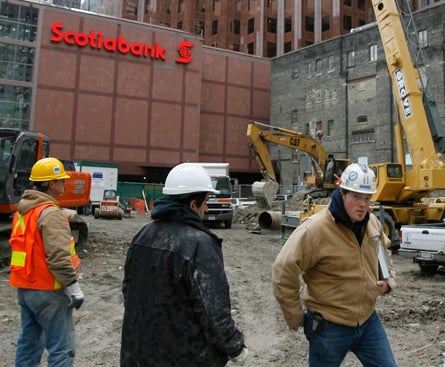 The multitude of construction cranes that now dot Toronto’s skyline seem to point upwards as if oblivious to the harsh economic times unfolding below. Floors keep getting stacked onto condo project after condo project, adding to the number of new units that are unsold, and will likely remain that way for many months. It’s a trend that has led many in this city to look up and wonder not just who’s going to buy all these new condos, but whether a crash in the once-heated condo market is now all but inevitable.

A report this week from TD Economics says “no.” The inventories of new condos, while significant, are not as bad as one might think, nor is the impact the recession is having on the economy of the Toronto area. The market is certainly caught up in the downturn, but the kind of underlying circumstances that have caused all-out meltdowns in U.S. cities do not exists here, it says. Toronto’s condo market is in the midst of a “cyclical downturn rather than a drawn out structural downturn,” it states.

There are, in fact, some rather encouraging signs in the condo market, says the report’s author, TD economist Pascal Gauthier. In the first quarter of this year, sales appeared to be firming up and while they will likely remain quite low this year compared to levels seen during the recent boom years, the numbers are “pretty decent . . . given how strong the economic headwinds are,” he says. The fact that the Bank of Canada has brought mortgage rates to the lowest level possible will also help soften the cycle, he
adds. Then there are the overall economic conditions in Toronto. While job loses have been heavy across Ontario, Toronto has been relatively unscathed. Employment in Hogtown is down less than one per cent, compared to a six per cent drop during the recession in the ’90s. It all bodes well for the city’s condo market.

While there might appear to be a glut of new units on the market, the levels are not yet overly worrisome, says Gauthier. In the mid 1980s builders kept adding new condo units for three years, seemingly out of touch to changing market conditions. The number of condos built between 1987 and 1989 was the equivalent, in today’s terms (taking into account population and household growth), to 81,000 units. That’s compared to about 35,000 between 2007 and 2008, notes the report. “It became more than a cyclical problem, it became a structural problem,” says Gauthier. That does not appear to be happening this time around. Builders, he notes, have been scaling back.

But there are still risks ahead, especially if that trend of slowing starts doesn’t stick, and builders pump out condo units faster than the market can handle in coming months. At that point, says Gauthier, it will be “time to raise the red flag.”