This Corvette will save Detroit

The U.S. auto industry once again turns to a sports car for salvation. But with sales on the rise and new technologies, this time there's reason for optimism

If the American auto industry were to write its own Hollywood-style comeback story—from the depths of its 2008 crash to its improbable return to the top of the world—the ending might look a lot like the 2013 Detroit auto show. And cast in the starring role would be General Motors’ 2014 Corvette Stingray.

The company unveiled its cherry-red sports car to eager journalists on the eve of the world’s most important auto show this week, almost 60 years to the day after it first introduced the revered American nameplate. By the next morning the brightly lit and packed Cobo Center was buzzing about one car above all others, as cameramen and their tripods crowded around the ’Vette to get a closer look at its race-car-influenced aluminum body and luxe interior. GM’s marketers gushed that it is faster than a Ferrari, more nimble than a Porsche and $30,000 cheaper than either. America had, for the first time in memory, unveiled the kind of car that kids might hang a poster of on their wall. High-tech, even fuel-efficient, it left no question: America is back. A “technological tour de force,” said GM’s North American president Mark Reuss.

This is not the first time U.S. automakers have hyped a hot new sporty car as evidence of rediscovered American know-how. There have been new Camaros and Mustangs and last year a Dodge Dart. But this time, it is at least reflective of a much healthier industry. North American automakers just recorded their best annual sales since 2007. GM once again had the highest sales in the U.S. market, which itself grew to 14.5 million vehicles, 13 per cent more than in 2011, according to the industry website Edmunds. Ford saw a five per cent increase in U.S. sales and led the Canadian market for the third year in a row. Chrysler, meanwhile, experienced the sharpest growth of the Detroit Three, with 21 per cent more cars sold in the U.S.—its best since 2007.

Fitting, too, was the fact that American companies swept the North American Car and Truck of the Year awards, which kicked off the show. General Motors took home the car of the year award with the Cadillac ATS, and Chrysler’s Ram 1500 won truck of the year. Four of the six finalists came from the Detroit Three. Analysts say that reflects a critical shift in the North American industry, which has learned how to make cars that buyers want—selling them not via easy-money financing and discounts like they once did, but with high-tech features and bolder designs. There is little nostalgia for the pre-recession days. “There’s a feeling of renewed optimism and confidence about the future that for anyone who’s been coming to the show, certainly was not here for the past decade,” said Chrysler Group CEO Sergio Marchionne.

On the vast showroom floor, automakers took the wraps off 50 new or redesigned vehicles. (Industry intelligence firm Polk predicts that will rise to 100 new models over the course of the year, up 50 per cent from 2012.) The industry is spawning some strange concepts, not the least of which was Nissan’s new “scent,” which it will spritz about showrooms in the U.S., building brand recognition by smell, as well as sight, touch, and performance. (The company says it has a hint of green tea). At Ford’s electric blue installation, men dressed in period costume offered tours of Ford’s historic vehicles.

Behind the salesmanship, however, is a reinvigorated and competitive market that extends well beyond the Detroit Three. “There are eight manufacturers in the United States, all of which are very competitive and none of which has a dominant position,” says Tom Libby, lead analyst for North America at Polk. “That creates a very open, competitive market we have not seen in decades in the country.”

Sales in the U.S. are widely forecast to rise again in 2013 to 15 million, a less dramatic growth of about three per cent, adding pressure on manufacturers. “We finished the year very strong,” says Jessica Caldwell, senior analyst with Edmunds. “I think it’s going to be hard to keep that type of pace up.”

Luxury automakers are pushing particularly hard for a bigger slice of the North American market. The Corvette’s reveal was relatively tame compared to the troupe of circus performers that helped launch Nissan’s Infiniti Q50, or the magic-themed video and live performance that preceded Audi’s new and most powerful offering, the RS7 four-door coupe. Other luxury offerings on display included the Maserati Quattroporte sedan, BMW’s M6 Gran Coupe and 4 Series Coupe concept and a compact SUV from Ford’s Lincoln brand. From Cadillac and Lexus to Mercedes-Benz, Bentley and even Hyundai—premium cars dominated the showroom floor.

The money being poured into the luxury market is a sign of the return of North America as the most important car market in the world. Europe’s once-booming market is now in crisis and China’s, despite its massive potential, has still not emerged as a highly profitable one. Marchionne pegged European auto manufacturing operating losses in 2012 at $6.6 billion. As the eurozone crisis trudges on, he described a sense of déjà vu. When Chrysler and Fiat merged in 2009, the latter saved the former. In 2013, the roles have reversed. Chrysler now finds itself as the dominant side in the partnership, accounting for 60 per cent of sales.

German automakers, suffering a plateau in sales at best, are happy that Americans have their “buying spirit” back, quipped one German journalist. Both BMW and Mercedes-Benz posted best-ever sales in America in 2012, with BMW edging out its rival to become the top luxury brand. The world’s No. 2 automaker, Volkswagen, sold 26 per cent more vehicles in the U.S. last year.

The world’s No .1 automaker, Toyota, came back from a devastating 2011 to claim the top-selling vehicle in the U.S., the Camry, and posted a 27 per cent jump in overall sales. After hyping 2012 as the “year of the hybrid,” its expanded Prius hybrid brand sold 73 per cent more cars than 2011.

Despite the hybrid tags on nearly every display at the auto show, and some flashy concepts like a Volkswagen mid-sized hybrid SUV, hybrids and electric vehicles still only account for a few per cent of overall sales. Leaps in fuel-efficient technologies have meant consumers can spend less on traditional gas-powered models and drive further without taking a hit at pump. Even big American pickup trucks, parked to the side of automakers’ displays at recent shows, were being shown off this year. Ford unveiled its edgy Atlas concept truck with a new “EcoBoost” engine.

But these innovations still took a back seat to what has become one of the most important components in a new car: high-tech safety, infotainment and features that are just plain cool. Tellingly, this was the first year the Detroit Auto Show didn’t conflict with the Consumer Electronics Show in Los Angeles, notes Rebecca Lindland, an analyst with IHS Automotive. “A few years ago it wasn’t even seen as a conflict,” she says. “It was like, what does one have to do with the other?” This year, major automakers rubbed shoulders with the tech industry at the CES last week, showing off advances like Toyota’s autonomous car, which uses lasers and cameras to detect road obstacles.

In Detroit, they displayed new infotainment technologies now embedded in almost every vehicle, including, of course, the new Corvette. Ford Canada CEO Dianne Craig highlighted one new app where people can have the latest Wall Street Journal read aloud to them as they drive. Hyundai’s concept car featured an entertainment system controlled entirely by hand gestures. These technologies will “continue being more and more relevant,” noted Chrysler’s Marchionne, despite the hefty investments they represent to automakers. Marchionne said he’s “concerned” every time he sees the cost of these new systems, especially now that consumers expect those features even in lower-priced models, like the Dodge Dart. “[It’s] much, more intrusive in cost than we ever expected,” he said.

But in the eyes of the auto industry, it’s one of the keys to unlocking the malaise of young buyers. The Mini Cooper stood out this week not for its swanky lounge or fresh pulled americanos. Instead of the leggy women poised at most displays, Mini chose brand ambassadors that looked like they just wrapped up university class. Honda, a perennial leader in small car design, unveiled a concept compact SUV it said was specifically targeted to young buyers, and Jeep took similar aim with its own compact SUV, the 2014 Compass. Both Ford and GM invited bloggers and social media specialists to tweet auto show news to what they hope will be the next generation of buyers.

Still, the best sales weapon of all remains fast cars like the Corvette. Like the auto show car-shiner tasked with buffing a mirror-finish to its sleek body, most Americans will never actually drive one (the price has not been released but a base model is expected to cost at least $50,000). But GM hopes a new generation of drivers will be dreaming of it, not just here in North America, but around the world. And that says a lot about how far Detroit has come. 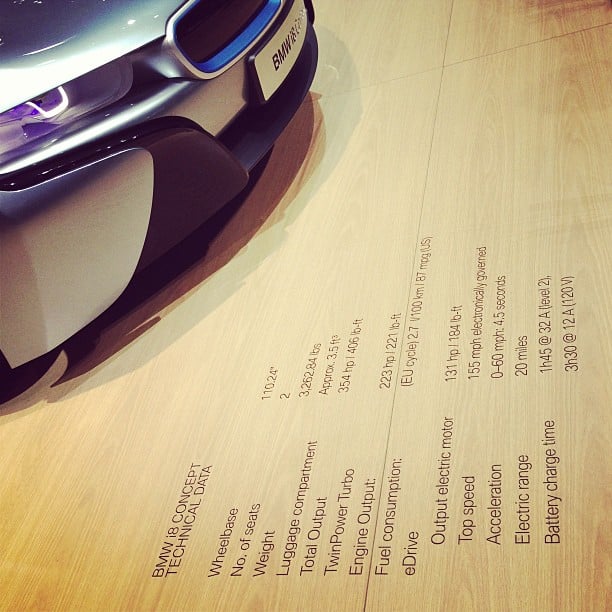 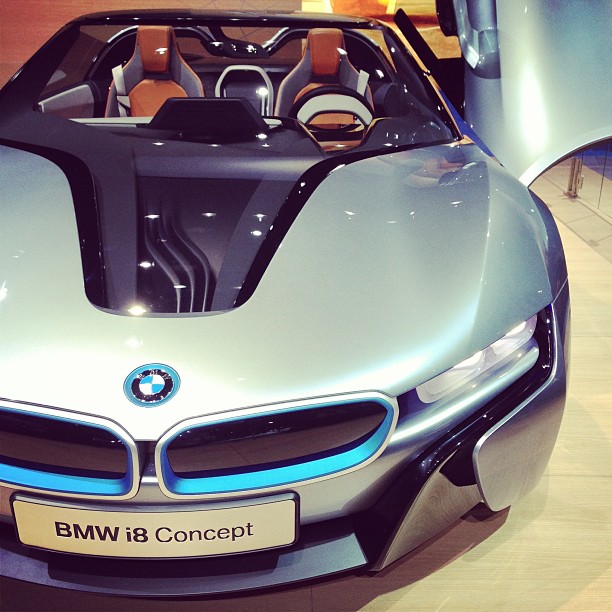 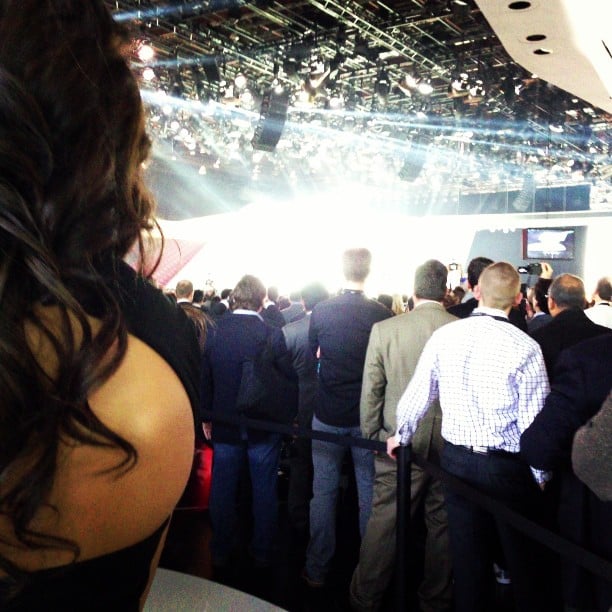 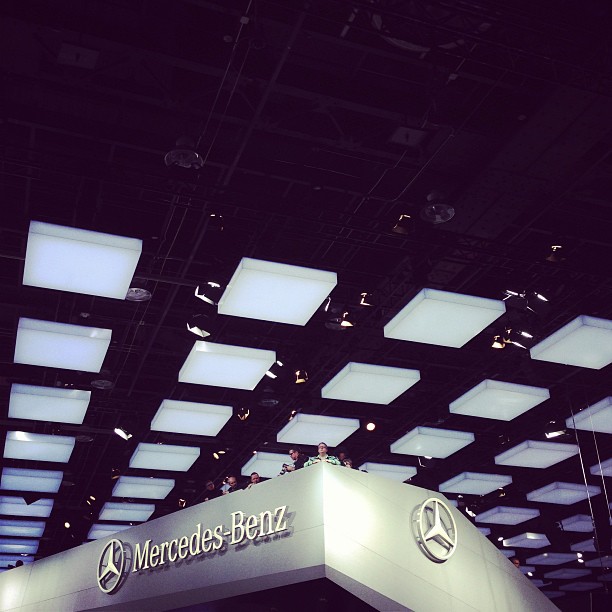 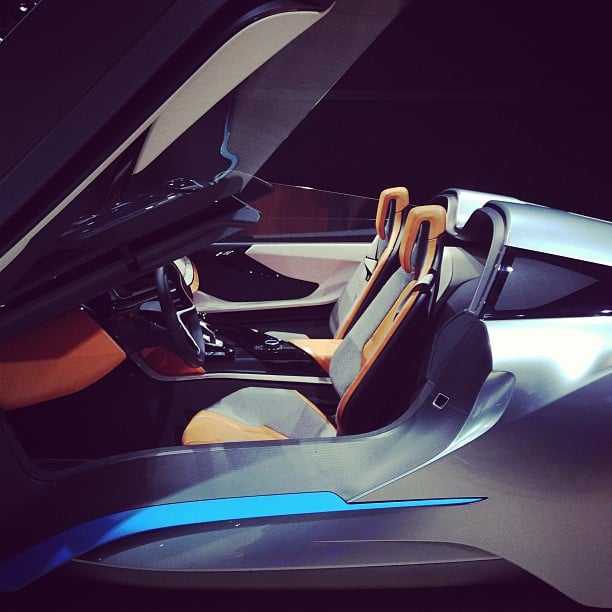 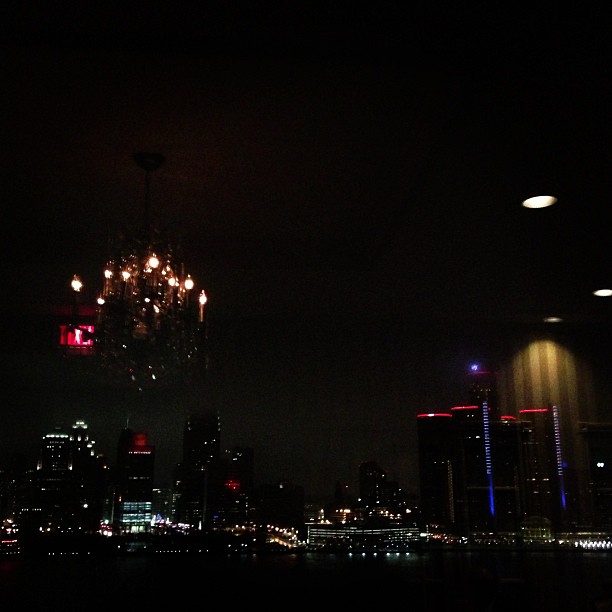 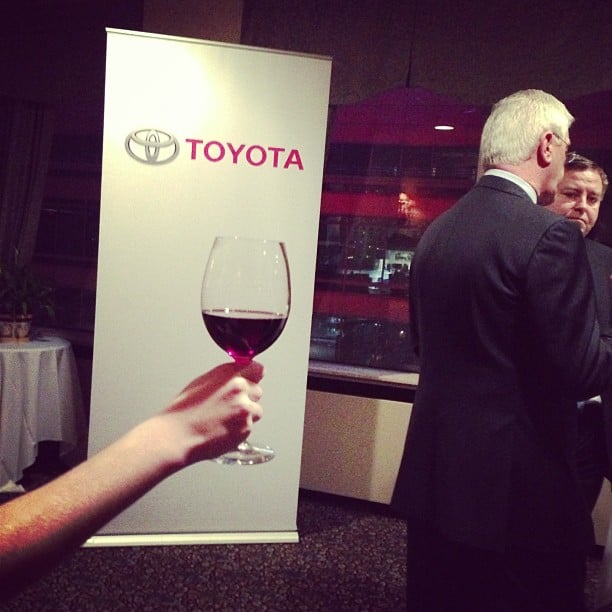 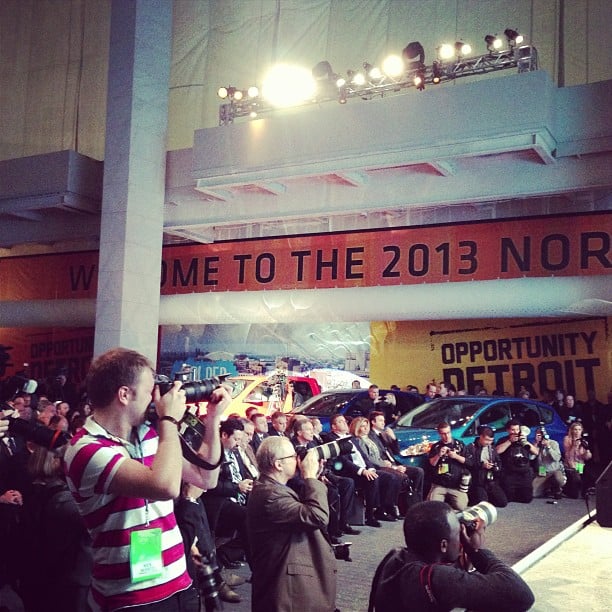 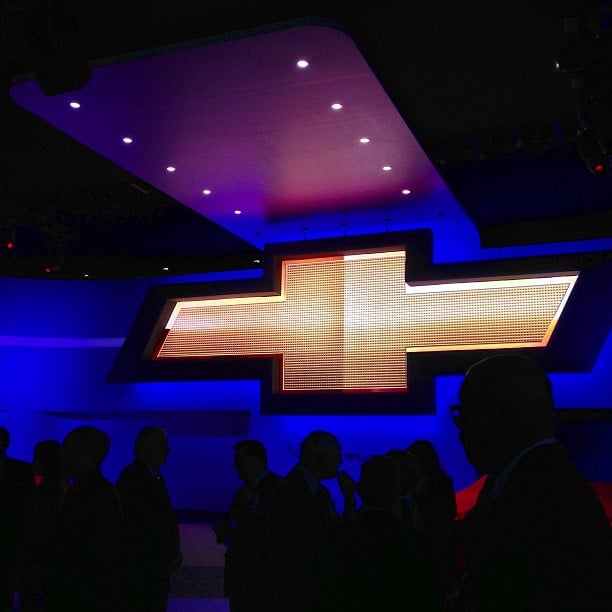 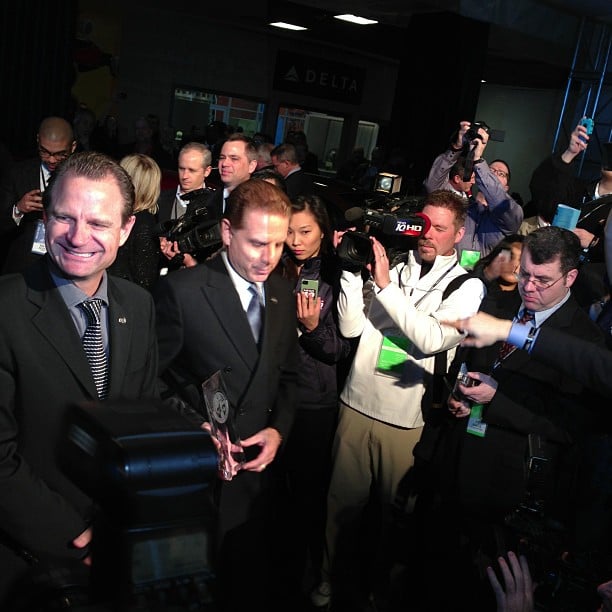 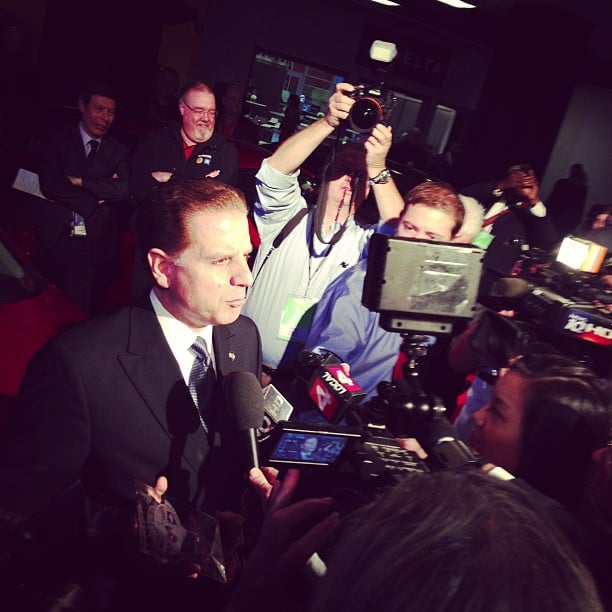 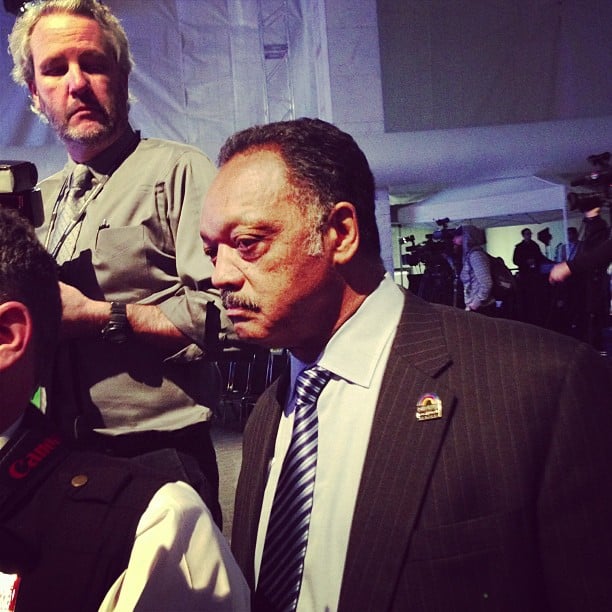 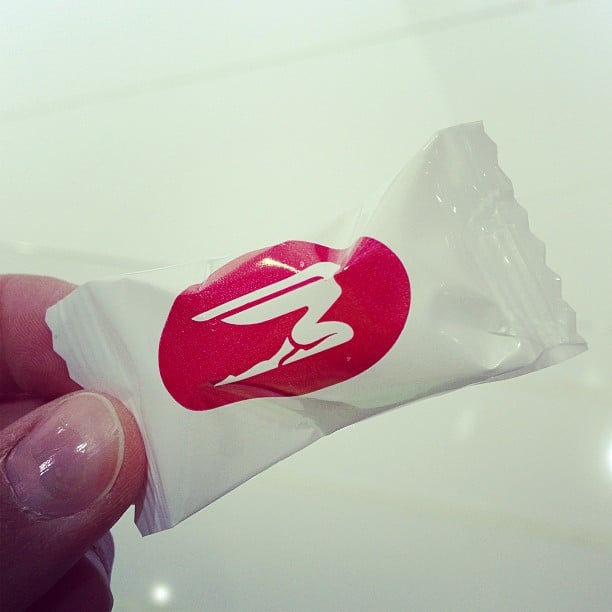 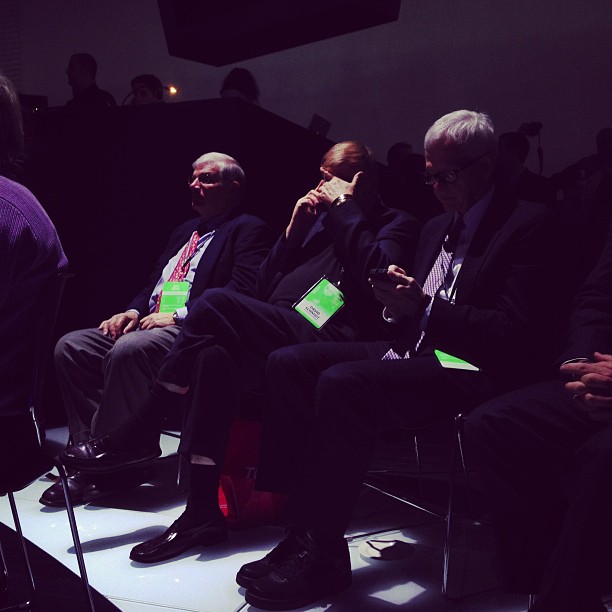 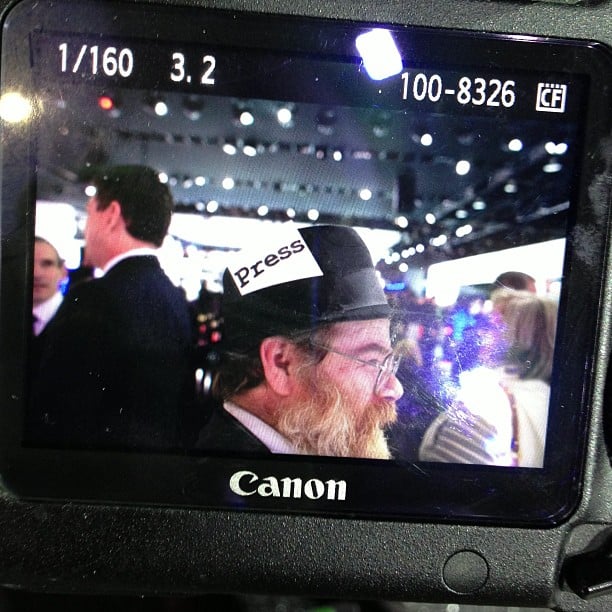 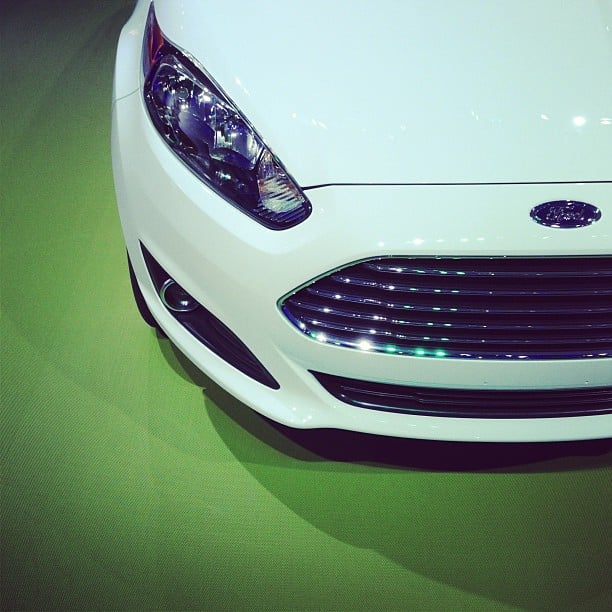 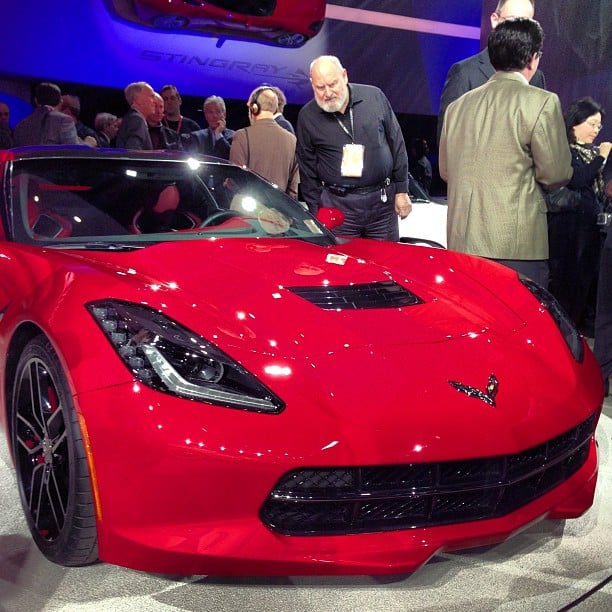 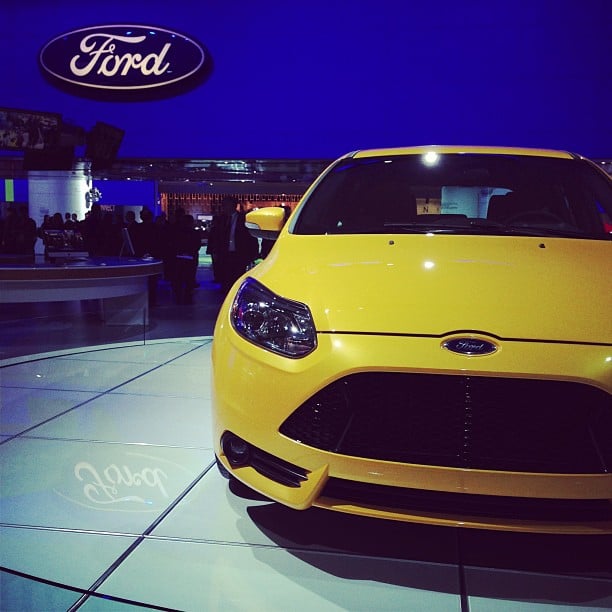 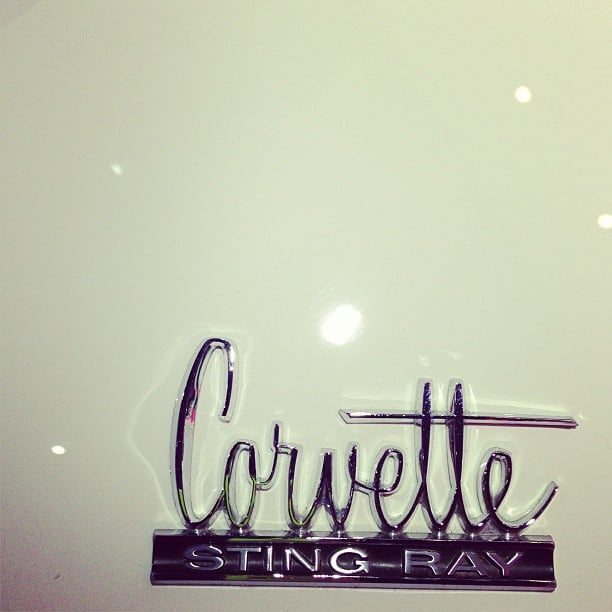