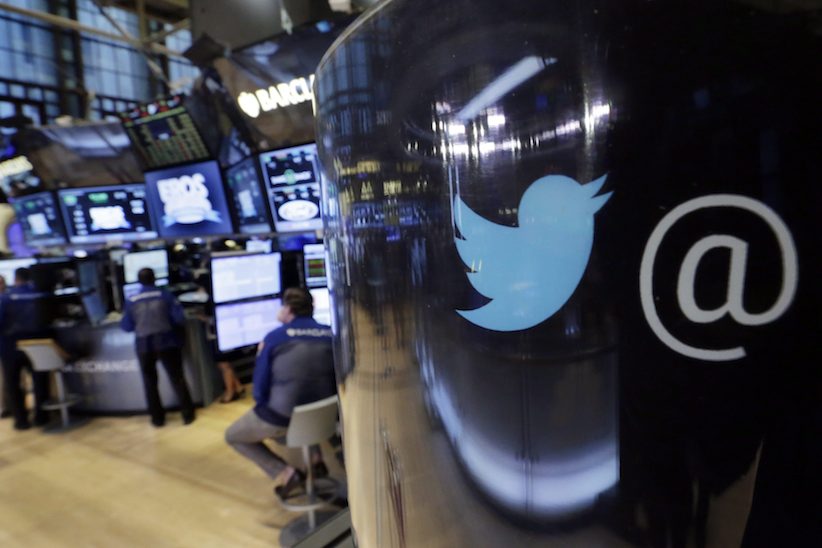 The Twitter logo appears on a phone post on the floor of the New York Stock Exchange, Tuesday, Oct. 13, 2015. (AP Photo/Richard Drew)

Its stock fell almost 4 per cent in morning trading Monday.

CEO Jack Dorsey posted a statement to the microblogging service saying that Alex Roetter, Skip Schipper, Katie Stanton and Kevin Weil are exiting the company. Dorsey said he wanted to address employees later this week, but issued a statement due to ‘inaccurate press rumours’ about the departures.

Was really hoping to talk to Twitter employees about this later this week, but want to set the record straight now: pic.twitter.com/PcpRyTzOlW

After a long streak of robust growth that turned it into one of the Internet’s hottest companies, Twitter’s growth has slowed dramatically during the past year-and-half to leave the San Francisco-based company scrambling to catch up with social networking leader Facebook and its 1.5 billion users.

Dorsey helped invent Twitter in 2006 and imposed a 140-character limit on messages so the service would be easy to use on cellphones that had 160-character limits on texts at that time. Those texting limits on phones faded away several years ago as the advent of smartphones enabled people to use other Internet messaging services. Twitter may be looking to expand beyond its 140 character tweets in a bid to make its service more appealing to wider audience.

I’m forever grateful to @aroetter, @katies, @skipschipper & @kevinweil for everything they’ve given to Twitter. They are absolutely amazing!