Even Statistics Canada couldn’t help but note that the tables are turning in North America:

The Canadian economy expanded — or rather, sputtered along — at 0.1 per cent in the third quarter of the year, which works out to an annualized pace of 0.6 per cent. It was below what RBC had called a consensus estimate of 0.8 per cent annualized growth, and a far cry from the Bank of Canada’s somewhat bullish call for one per cent annualized growth. It’s unlikely now that Canada will meet the governor’s target rate for the year of 2.5 per cent growth. 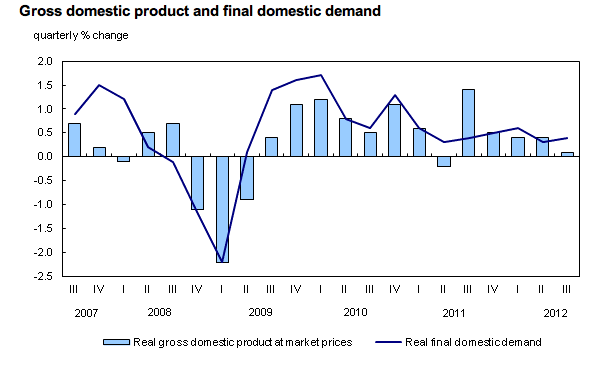 As yesterday’s release on Canada’s current account foreshadowed, the main drag on growth was exports, which fell two per cent in the three-month period, “the largest decline since the second quarter of 2009.” And within that, it was the mining sector in particular that dragged the number down. Oil and gas extraction fell 1.4 per cent, and mining excluding oil declined 2.8 per cent, as potash and at copper, nickel, lead and zinc mines were also in the doldrums. Much of this is likely the blow coming from weakening commodities markets, which in turn reflect slowing global growth.

Business investment was the other major weight on growth, including in the residential housing sector, where it dipped 0.8 per cent.

Amazingly, the biggest boost to GDP came from consumer demand. Canadians kept on spending, happily digging into savings and driving up consumption by one per cent even as disposable incomes grew by only 0.8 per cent. 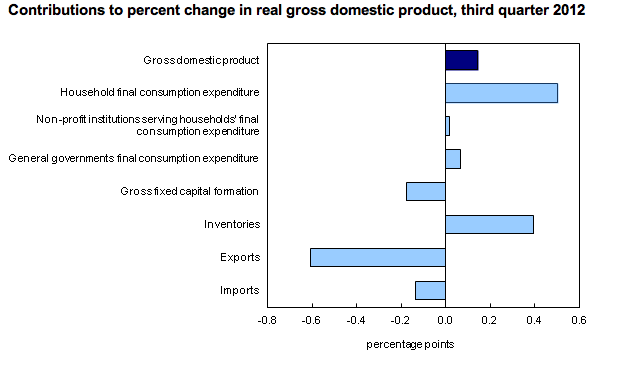 How much longer can family wallets be the drip that prevents the economy from flatlining? With the housing market cooling, likely not long. And yet, again, one never knows. This last, disappointing economic release all but ensures that the BOC will keep interest rates steady at one per cent on Tuesday—so borrowing costs will stay low for the foreseeable future.

Our best hope to return to healthy growth is exports. And here, that 2.7 per cent GDP number in the U.S. is mighty good news. Barring a ruinous tumble down the fiscal cliff, the recovery south of the border seems to be picking up speed and investors are increasingly grumbling about the loonie being overvalued. We might not be out of luck just yet.