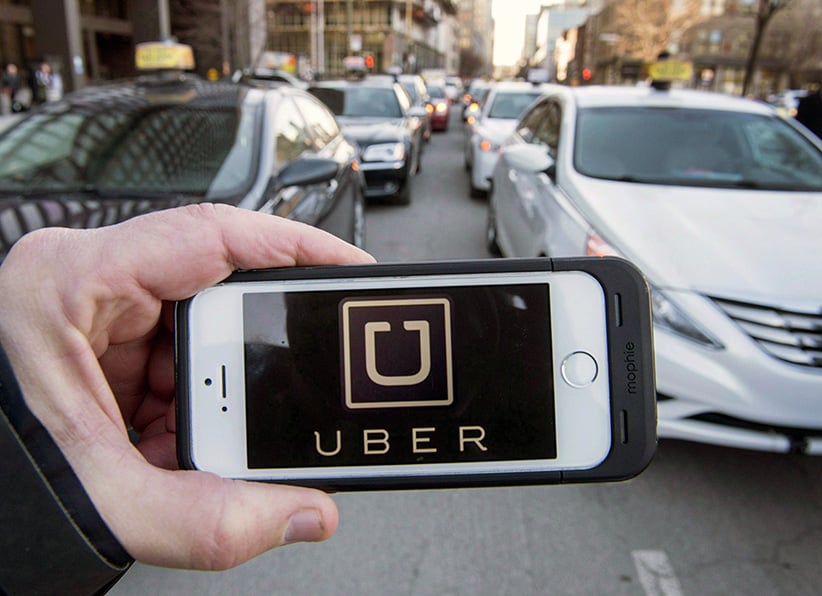 The Uber logo is seen in front of protesting taxi drivers at the Montreal courthouse, on February 2, 2016. (Ryan Remiorz/CP)

GATINEAU, Que. — Both the Quebec government and Uber say they have reached an agreement in principle on a pilot project that will allow the ride-hailing service to continue operating in the province.

The Quebec government later confirmed the agreement, but no details about the pilot project were disclosed.

Transport Minister Laurent Lessard said in a statement that the company has agreed to make concessions to its business model in order to comply with Quebec laws and regulations.

Guillemette said Uber decided to continue operating under the pilot project to give Quebecers “more options to get around town or use their car to earn income” and to show a willingness to work in a regulated industry and “be a partner in innovation.”

“In the days to come, we’ll have more to say about how this pilot project impacts riders and drivers,” he added.

Earlier this year, the province passed legislation to regulate transport by taxi services — including Uber. Enactment was delayed by three months until Sept. 8 to allow both sides to negotiate details of the pilot project.

As that 90-day period ended, Lessard said negotiations were in a “difficult period” and he suggested the respective positions of Quebec and Uber were hard to reconcile.

Premier Philippe Couillard said Wednesday he was optimistic that a deal would be reached, adding Uber had to adapt to the province’s demands.

Uber has said it is ready to pay provincial and federal taxes and Quebec estimates it currently loses about $20 million in taxes.

But the company is also seeking more flexibility for its drivers and doesn’t want to have to shell out the steep market price for taxi permits as the province is asking.

It also wants its drivers to be able to work whenever and wherever they want, which Lessard said would have a negative impact on people who hold actual taxi permits.

The new law requires all drivers to have a specific licence for taxis, undergo criminal checks and customer service training and have special plates on their cars.

Lessard had called the tech company’s activities in the province illegal and, barring an agreement, the province’s automobile insurance board would enforce the new law, which would see licences suspended and vehicles seized.

Uber’s arrival in Quebec has angered the taxi industry, which has protested against the company’s failure to adhere to the same rules required to drive a taxi.