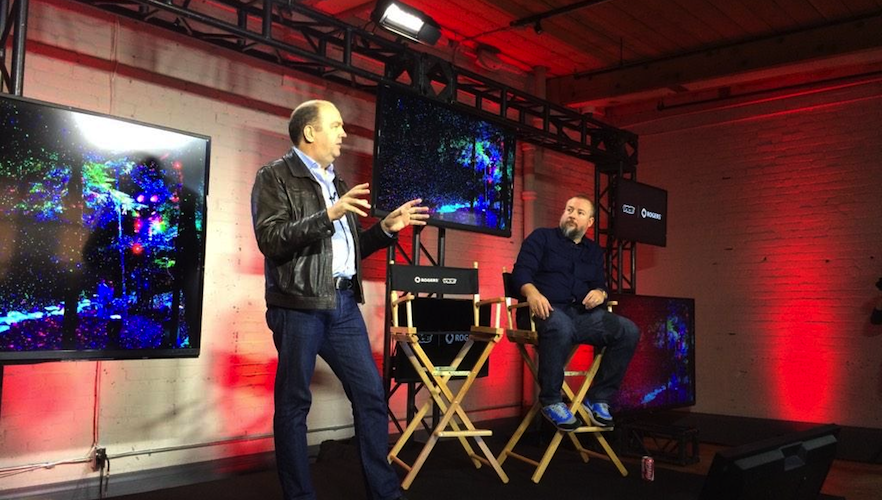 Digital powerhouse Vice Media and cable provider Rogers Communications Inc. will team up to launch a Canadian production studio and TV channel aimed at Millennials, the companies announced this morning. Rogers CEO Guy Laurence held a press event to announce a $100-million joint venture between the companies, which will include a Toronto-based Vice Canada Studio; Vice TV Network will begin operations in 2015.

“We wanted to build a powerhouse for Canadian digital content focused on 18- to 34-year-olds,” said Laurence. Vice’s irreverent, offbeat style has made it required viewing for that demographic, so it’s the obvious partner for a traditional media giant like Rogers, looking to attract a Millennial audience (Rogers owns Maclean’s and Canadian Business).

Vice CEO and founder Shane Smith first announced plans for a 24-hour television news channel at an Abu Dhabi media summit in 2012. However, the company’s initial foray into the cable world came in the form of an Emmy-nominated one-hour newsmagazine show on HBO. Segments from that show, which first hit screens in 2013, have included a ride-along with Islamic State fighters and a trip to North Korea with former NBA star Dennis Rodman.

Late last year the company launched Vice News, a global news channel located on the outlet’s own website and YouTube channel. Canada was given its own local edition of Vice News along with a Toronto-based newsroom—an early sign that the company was once again interested in the country in which it was founded. Vice recently announced it would establish local-language and newsroom editions in seven new countries, including Germany, France, Brazil, Australia, Mexico and Spain.

Vice had not provided updates on its offline intentions until today, but rumours of a takeover attempt by conventional broadcasting companies Time Warner and Fox served to keep the news-channel speculation alive, because being absorbed into a traditional media conglomerate would give Vice easy access to their cable networks and partners. Although the company recently took in a $250-million investment from A&E Networks that valued the company at $2.5 billion, the launch of Vice’s own production house should put buyout rumours to bed.

A traditional television offshoot may not seem like the most obvious move for Vice, considering the success of its online offerings and the indifference of its young audience to terrestrial TV. But there’s a lot of money to be made in specialty channels, which the youth-targeted Vice channel would effectively be. American offering Pivot is the only other outlet so far targeting that niche, which encompasses the 18–34 male viewer whom every advertiser covets. And despite the growing share of marketing dollars spent online, television is still a favourite medium for the brands spending the biggest bucks.

“Essentially we are building a content-creation hub that will generate premium video for a cutting edge media company that will program—simultaneously—the holy trinity of convergence; mobile, online, and TV,” Smith said.

The production house will operate under Vice’s creative direction. For Rogers, a partnership with Vice may be seen as the solution to a particularly vexing problem for cable companies: more young people than ever before are consuming video, but fewer and fewer have cable subscriptions. By research firm comScore’s estimate, 16 per cent of Canadians watch all their media online. The move to streaming services has led to a significant decline in subscribers for the country’s cable companies, including market leader Rogers, with its 5.2 million subscribers. But more daunting for these television providers are the “cord-nevers”—Millennials who have never had such a subscription and are unlikely to consider getting one even when they finally have the money to do so.

Rogers for its part has been making aggressive moves in the digital space, particularly in the realm of online video. This month, the company will roll out Shomi, a video-streaming service launched as a joint venture with telecom rival Shaw. It has also teamed up with Shomi-target Netflix to produce a new survivalist thriller series, Between, which will air on Rogers’ City stations.

Those deals show that Rogers is willing to work with competitors to stay relevant in a fast-changing media world. Today’s deal does something more ambitious: it raises Vice up as a partner and potential future rival. Sure, Vice already has strong revenue streams and a profitable marketing arm to bring in the cash. But traditional telecom conglomerates like Rogers still rule the content business end-to-end by producing the shows that consumers watch and owning the channels and cable connections on which they do so. So far Vice has built the valuation and cultural cachet of a major media company, but little of the infrastructure to deliver its content to mobile and TV consumers. This deal with Rogers gives them that access, and gives Rogers an exclusive source of content for its mobile subscribers.

Canada has long been a test market for brands—a microcosm of the North American market with lower stakes. Digital outlets have been particularly keen to try out their offerings here, with Facebook and the Huffington Post looking north to validate new ideas before applying them to the larger U.S. market. So it’s not sentimentality alone that brings Vice home for its first foray into the offline media world. As with everything Smith does, there’s cold logic behind the move.

Canada’s cable market is significantly less complicated than the U.S., with a handful of companies controlling the vast majority of subscriptions. Partnering with the industry’s biggest provider—not to mention a large Canadian media brand in its own right—gives Vice the best possible chance of success here, success that the brand can point to when it finally decides to take the plunge south of the border.