Not everyone is excited about the new ads 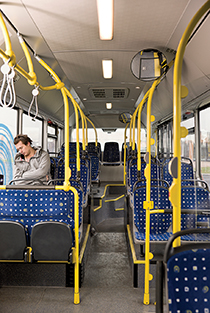 Along with the German ad agency BBDO Düsseldorf, the company is using technology that beams high-frequency oscillations, or vibrations, through glass. When a commuter rests their head against a train window, the oscillations are converted into sound through a process called bone conduction—they will hear the message while other passengers remain oblivious.

A video of the technology at the International Festival of Creativity in Cannes, France, last month showed surprised passengers unexpectedly hearing an ad urging them to download the Sky Go app on to their smartphones.

But not everyone was happy to hear it. Though the possibilities the new technology presents—such as the ability to broadcast music, weather reports and entertainment through glass—got positive reviews, some commuters were annoyed they couldn’t just rest their heads and sleep in peace.