We can't do both, writes Stephen Gordon 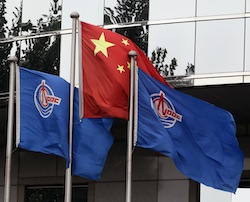 The proper context for thinking about the CNOOC-Nexen and the Petronas-Progress takeovers is what I described  here: the real economic story of the oil sands is the investment in physical capital—structures and equipment—that is required before production can even start.

These investment numbers are very, very large. The oft-cited estimate of $650 billion in the next decade should be taken with a grain of salt, because we don’t know the assumptions that went into it. Even so, the fact that the costs of a single oil sands installation is measured in billions of dollars suggests that estimates in the hundreds of billions of dollars are at least plausible. (To give you an idea of how big these numbers are, current Canadian GDP is around $1.8 trillion a year.)

A national accounts identity tells us that all investment expenditures must be financed out of the savings of someone, somewhere:

Let’s look at each component in turn.

So the lesson to be drawn from new rules on foreign takeovers is that the government seems to be willing to accept reduced oil sands investment in return for… what, exactly?

No-one seems to know—or if they know, they’re not telling. Mistrust of state-owned enterprises (SOEs) is supported by not much more than dark, inchoate hints of their potential for mischief. On the other hand, the reason why SOEs in China and other countries would want to invest in the oil sands is obvious: the expectation of a return on their investments. The result of years of deliberately suppressing the value of the yuan renminbi  has been the accumulation of over $U.S. 3 trillion in foreign reserves, and the Chinese government is no doubt interested in earning returns greater than what U.S. treasuries are delivering right now.

There are of course concerns about dealing with a country with a human rights record like China’s. But it seems odd to be raising these concerns at this point. China accounted for 10 per cent of Canadian imports in 2011 (worth $48 billion), up from 1 per cent in 1990. SOE ownership of oil companies is a curious place to draw the line.

This story could be on the right track: the government may want to use obstacles to investing in the oil sands as a bargaining chips to force China to let Canadian investors have greater access to Chinese capital markets. This is at best a gamble: there’s a not-insignificant probability that Ottawa is overplaying its hand. But if this is in fact what the Conservatives are thinking, then the message they’re giving to Canadian investors in the oil sands is that their interests are significantly less important to the government than are the interests of investors in other sectors.