Welcome back to the age of big government in Canada

The word 'government' was all over Bill Morneau's lips in his budget speech—with few mentions of 'business.' Times are a-changing. 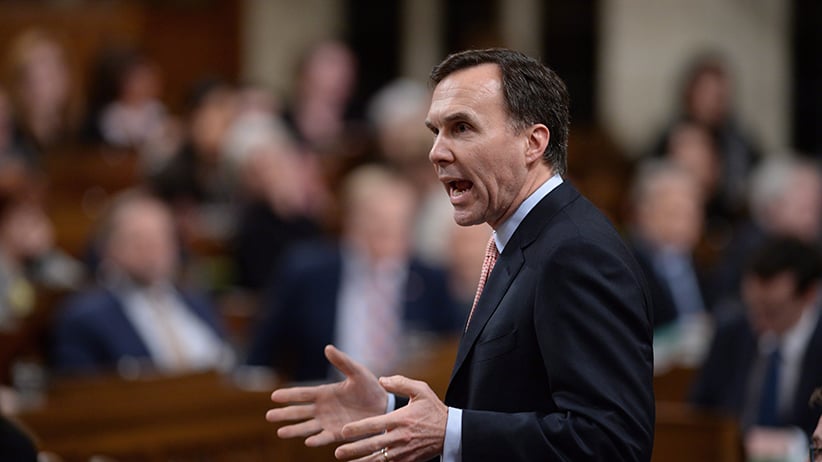 Minister of Finance Bill Morneau responds to a question during question period in the House of Commons on Parliament Hill in Ottawa on Monday, Feb. 22, 2016. (Sean Kilpatrick/CP)

When a budget is released, it’s tradition for economy watchers to pick apart the announced spending plans and cutbacks to declare the day’s winners and losers. There are certainly a lot of groups and interests that Finance Minister Bill Morneau would like everyone to think of as winners from his $300-billion budget—middle-class families, municipalities, veterans, middle-class families, Indigenous people, the environment, scientists, and even, in a roundabout way, the not-quite-middle-class royal family (Prince Harry’s Invictus Games will get $10 million to support its upcoming event in Toronto).

Yet one of the clearest winners from this budget has to be the wonks at the OECD and the IMF, two organizations that for some time now have been calling on governments to dig deep and spend their way out of their economic malaise. Translation? Run big deficits. Has there ever been a politician more eager to cloak himself in their counsel? As Morneau said during his speech, and repeatedly in the budget plan: Everything his government is doing now is at the “urging” and “recommendation” of the OECD and IMF.

If the election of Justin Trudeau last fall didn’t drive home the point enough, Tuesday’s budget had one underlying message for Canadians: big, activist, interventionist government is back in Canada’s economy.

Related: John Geddes on the sting after Trudeau’s honeymoon

Its outline is still vague, but it began to take shape as the government released details of its sprawling 10-year, $120-billion infrastructure plan. There was the usual mix of infrastructure as most people understand it—things like transit, roads and sewers—and the more amorphous social and cultural infrastructure the Harper government also liked to embrace.

At this point, Morneau’s budget only details phase one of his government’s infrastructure plans, a shovel-ready sum of around $12 billion.

But phase two—the “ambitious” infrastructure that will guide Canada’s transition to a low-carbon economy—will only start to develop its flesh later this year through consultation with other levels of government and institutional investors. It will be accompanied by direct investments in clean technology, infrastructure for electric vehicles and alternative fuels, as well as an innovation agenda that, the budget claims, will use a “client-centric” approach to scale up thousands of growing Canadian companies.

(As the government had indicated ahead of time, there was nothing in the budget about bailing out Bombardier. But it will be a shock to everyone if the activist Liberals don’t come through with the $1 billion Quebec has asked it to pitch in to save the company’s C-series jet program.)

Related: Paul Wells on the work the budget didn’t get done

There is clearly not the rush now to get Ottawa’s finances back in the black that existed during last year’s election campaign, when Trudeau promised a balanced budget by the end of his mandate. Both Trudeau and Morneau have already grown comfortable with the language of bigger government. Of the government’s $30-billion deficit for 2016-17, Morneau would only say he believes the government will “get back to a balanced budget over time.”

In fact, the only area where the Liberals are reeling in the size of government is in the realm of defence. The budget revealed the government is pushing back spending on new defence hardware to save themselves a whopping $1.32 billion in 2017-18.