A commodities bust could be a double whammy for exports

Budget deficits, whether provincial or federal, tend to get all the press. The other big Canadian deficit—the current account deficit—usually flies well under the radar. Until this week, that is, when Statistics Canada released numbers indicating that our trade deficit with the world expanded from $1.9 billion to $2.3 billion in July.

The current account surplus or deficit is a measure of a country’s trading relationship with the world. You’ve probably heard of a key part of the current account, the trade balance, or exports minus imports. In addition, the current account also measures net investment income, i.e. interest earned from foreign holdings minus interest paid to foreigners, and net financial transfers over a given period.

Canada’s current account balance is significantly in the red. To be precise, as of the second quarter of 2012, our deficit has reached 3.6 per cent of GDP on an annualized basis. As BMO’s Nesbitt Burns noted, this represents a marked deterioration from the 2.8 per cent deficit recorded in 2011. Canada, they wrote, has only seen two years—1975 and 1981—when the current account deficit exceeded 4 per cent of GDP. We’re close what have typically been extreme readings.

Many experts, including economists at BMO, National Bank and the OECD  have pointed to the strong Canadian dollar as responsible for much of the deterioration in Canada’s trade balance. The value of Canada’s net merchandise exports have declined precipitously from almost $70 billion in 2001 to barely above zero in 2011. That number is now negative. 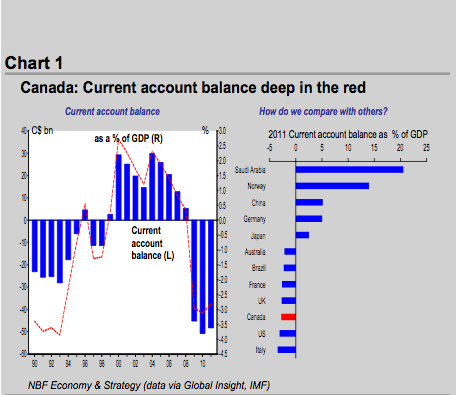 This is a sea-change for the Canadian economy. For years, trade was a positive for economic growth. Now it’s actually a drag on GDP.

The export deterioration is, amazingly, worse than it may first appear. Unsurprisingly, data from National Bank shows a sharp rise in the value of Canadian energy exports since 2004 alongside the oil boom (these exports are included in the merchandise trade statistics). At the same time, though, net non-energy exports have plunged from approximately $30 billion in 2000 to about negative $60 billion by 2011. That’s a swing of roughly $90 billion.

As the chart below shows, the divergent paths of energy and non-energy exports (aside from other commodities) is startling. It is in this context that Canada has recently experienced a vibrant debate about whether the flourishing of the commodity sector is indeed causing other manufacturers to suffer via a condition known as Dutch Disease, which I’m not going to delve into here. 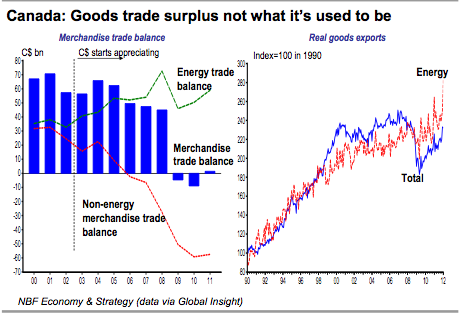 Going back to the trade deficit, it is noteworthy that despite incredibly high prices for everything from crude oil to copper to wheat, Canada’s status as a net exporter has evaporated. We aren’t running trade surpluses with oil close to $100, copper at $3.40 and farm products through the roof. This speaks to the depth of the decline of non-resource exports in Canada.

This raises an interesting question: what happens if resource prices fall significantly from current levels? I’ve written in a previous post for Maclean’s about how we are likely on the verge of a commodity bust driven by slowing growth in emerging markets and speculators getting cold feet.

This will amount to a double whammy for Canadian exports, which will likely decrease in value and volume. Our near-record current account deficit is set to plunge even further into the red, because while commodity exports can quite literally decline overnight, we won’t have the capability to soften the punch with non-commodity exports.

Why does it matter that Canada is running a large current account deficit, and seems destined to run an even larger one for the foreseeable future? Current account deficits are effectively financed by foreigners who buy the securities and companies of the nation in question. There isn’t such a thing as a free lunch: to the extent that a country continues to live beyond its means—i.e. runs large deficits with the rest of the world—it is being bankrolled by foreign creditors. This financing comes via two routes: foreign direct investment (think, for example, of a foreign company building a new industrial plant in Canada) and foreign portfolio investment (foreign investors buying Canadian stocks and bonds). The former financial flows are considered much more stable because they cannot quickly be repatriated. Portfolio flows, on the other hand, are a different matter. Those can leave the country almost at the click of a mouse. Unfortunately, the latter is how most of our current account deficit has been financed.

The risk, as National Bank observed earlier this year, is that “the dependence on portfolio flows … leaves Canada vulnerable to sudden shifts in investor sentiment and adds potential volatility to the Canadian dollar.”

Should foreign appetite for holdings of Canadian debt and stocks subside, this would likely put upward pressure on interest rates for Canadian government debt. At the moment both Ottawa and the provinces can borrow very cheaply from investors who have come to see Canada as a rare safe haven and are willing to lend in exchange for small returns.

The current account deficit is getting at least as ugly as that other kind of deficit.