What was actually updated in the fiscal update?

The headlines going into today’s Fiscal Update released by the federal government (and the first ones coming out) are about the upward revision in projections for the budget balance going into the 2015 election. To a certain extent, these revisions simply reverse the downward revisions that had been made in the 2013 budget:

Surpluses of $3-4 billion had been projected in 2011 and 2012 before being revised down in the 2013 budget. In any case, a $2 billion revision to the budget balance two years’ out is a very minor adjustment.

What I would have liked to have learned about are the mechanics of the $12 billion drop in the deficit for next year. The arithmetic behind the government’s strategy of letting transfers to individuals and provinces grow with nominal GDP while holding the line on nominal direct program spending is perfectly sound, but is working more slowly than initially planned.

Revenues have been a consistent source of disappointment – projections have almost always had to be revised down as new data came in:

With the exception of the current year, today’s update revises down the projected revenue profile. The Conservatives have had much better success at controlling what they can, namely, expenditures:

But those extra cuts in expenditures haven’t been enough to make up for the revenue shortfalls. In order to reconcile the  slower-than-projected reduction with a 2015 surplus, the projection includes a sharp contraction in the deficit for 2014-15. I could never figure out how a slow-growing economy could suddenly produce a large reduction in the deficit without a significant change in policy, and I was hoping – if not expecting – to learn more in this update.

It’s not hard to imagine how marginal improvements can be created out of thin air. As this table from the update shows, a sufficiently motivated and imaginative government can shave a few billions from the budget balance with little effort. For example, the entries for “Provisions for future asset sale revenues” illustrate how easy it is to produce a one-time boost to the bottom line: 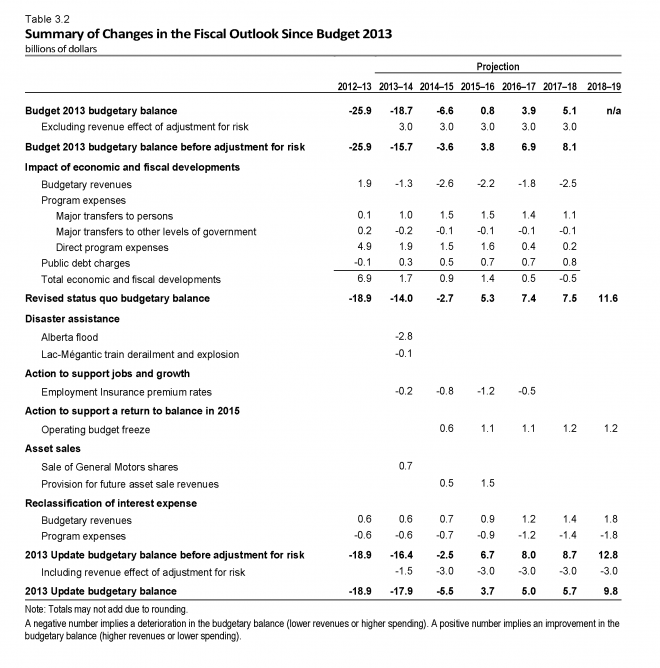 A partial explanation is what may be termed an optimistic forecast for revenue growth. The current projection has revenues increasing by 4.6 per cent between 2013-14 and 2014-15. This is a downward revision from the 6 per cent growth projected in last March’s 2013 budget – but it’s still a significant improvement on the 3.0 and 3.4 per cent growth in the last couple of years.

The rest of the story appears to be in the hints at even tighter control of program spending. We’ve already noted that the Conservatives have been holding program spending constant. The new projection now has total spending staying constant between 2013-14 and 2014-15. If transfers to individuals and provinces continue to increase, then that means program spending will have to be cut, in both real and nominal terms. This would be new, and the operating budget freeze starting in 2014-15 seems to be part of it.