What was Tim Hortons thinking when it ran those Enbridge ads?

How Tim Hortons get into this no-win #boycottTimHortons mess 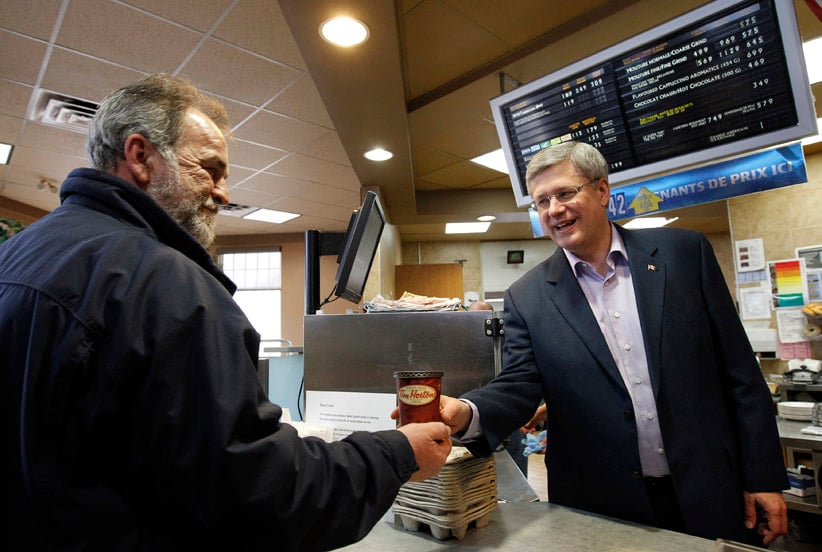 Conservative leader and Canada’s Prime Minister Stephen Harper works behind the counter during a campaign stop at a Tim Hortons in Dieppe, New Brunswick April 1, 2011. Canadians will head to the polls in a federal election May 2. Chris Wattie/Reuters

And just like that Tim Hortons went from darling of the Conservatives to scourge of Canada’s energy superpower ambitions.

The decision by Canada’s largest restaurant chain to yank ads for pipeline giant Enbridge from its in-store TV network on Thursday sparked an immediate and utterly predictable backlash online—well, predictable that is, unless you happen to be an executive at Tim Hortons. What started with a petition and calls earlier this week for a boycott against Tim Hortons for showing the Enbridge ads had, within hours, led to calls for a boycott against Tim Hortons for yanking them.

Everything started to go wrong for Tims shortly after Enbridge highlighted the ads on its blog (the post has been removed but you can see a cached version with the ads here). An organization called SumOfUs launched a petition demanding Tim Hortons drop the ads. After some 30,000 people signed up, the wobbly corporate knees at Tim Hortons HQ gave way.

At which point Stephen Taylor, conservative strategist and former chair of the National Citizens Coalition took up the pro-pipeline cause.

Before long Michelle Rempel, the MP for Calgary Centre and minister of State joined in. So did Jason Kenney (without actually calling for a boycott) and former Alberta Wildrose party leader Danielle Smith. It wasn’t all politicians on the right coming out against the company—Kyle Harrietha, the Liberal candidate for Fort McMurray-Cold Lake called on the company to re-air the ads—but there was a clear political bent to the Twitter protest. Which was rather interesting to watch, since no politician has done more to associate himself and his party with Tim Hortons nation than Prime Minister Stephen Harper.

How did Tim Hortons get into this no-win #boycottTimHortons mess? Were there no souls at the company who thought to ask themselves, “Hey, we sell donuts, do we really want to wade into the middle of the oil sands pipeline quagmire?”

To understand why Tims finds itself in the situation it’s in, it helps to understand a bit about its plunge into the broadcasting industry. Two factors in particular have made in-store TV technology popular—TV screens keep getting cheaper, while margin-crunched retailers and restaurants are looking for ways to squeeze more money out of their existing locations. Wal-Mart has an in-store TV program. So does McDonald’s in the U.S. For its part, Tim Hortons first rolled out its TV initiative in 2013 on a trial basis, with a goal of airing “creative, informative and entertaining” content, and offering “like-minded companies which share similar brand values the opportunity to advertise on the network.” By 2014 it was available in 95 per cent of its locations.

TimsTV has a lot going for it. On any given day more than five million pairs of dreary eyelids pass through its 4,500-plus Canadian locations looking for a caffeine fix. Conventional network TV execs would kill for such a massive and captive audience. Yet for good reason in-store TV struggled to catch on over the past couple of decades, with some companies rolling out in-store networks only to later backtrack. Getting the technology right has been one problem, but more important was figuring out what content to put on those screens and how to navigate potential pitfalls with advertisers, as any conventional media company might.

Actually, scratch that. Mistakenly showing a skin flick would no doubt earn Tim Hortons a barrage of complaints and several days of snarky headlines. But that’s nothing an abject apology from a grovelling executive or another round of saccharine commercials showing tykes on skates couldn’t fix. The damage from #BoycottTimHortons has the potential to be far more lasting.

What, for instance, can Tim Hortons say at this point? Crisis PR 101 would suggest you get out in front of the story, express some form of regret, and then pipe down until it all passes over. It’s hard to see that working here. Apologize for airing the ads in the first place, or then later pulling them, and the company comes off as reactionary and buffoonish to both the pro- and anti- oil sands camps. Or does Tim Hortons now have to determine on which side of the oil sands and pipeline question most Canadians land? (Good luck with that.)

This isn’t a matter of self censorship, or judging Enbridge, the oil sands or pipelines. It’s a matter of business common sense. Conventional broadcast, print and digital media regularly run ads for companies some people object to, but no one makes much of a fuss because it’s understood this is the media business model (such as it is, and for now). But Tim Hortons isn’t a media organization. It’s in the business of selling as much fast food as efficiently and profitably as it can. That’s what its investors expect it to do. When the company chose to go beyond what it does best and plunge into the network TV business, it’s obvious it didn’t think everything through.

Don’t be surprised if those in-store TVs disappear.