A hint of sanity in Quebec over the Cirque sale

The province says it won't intervene "in a private transaction" that could see Cirque du Soleil sold to foreigners. There's hope for Quebec yet. 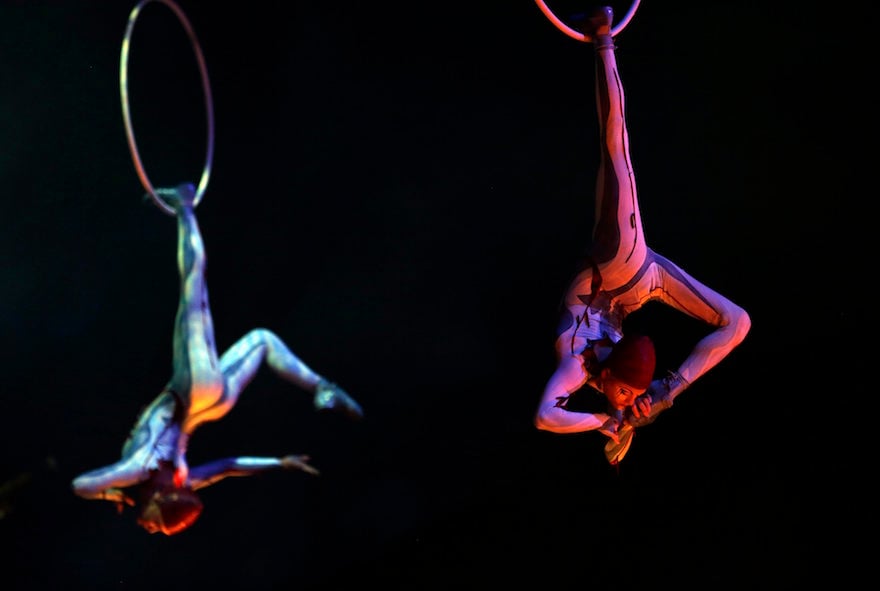 Artists of the Cirque du Soleil perform during the show “Quidam” at the Meo Arena pavilion in Lisbon, Portugal Thursday, Dec. 18, 2014. (Francisco Seco/AP)

Anyone who has watched a Cirque du Soleil show has marvelled at the way its performers appear to defy the laws of physics. But the Quebec government’s early response to the possible sale of the Cirque to a pair of U.S. and Chinese investment firms has to be regarded as a remarkable feat in its own right. Because in saying Thursday that his government would not intervene “in a private transaction,” Quebec Premier Philippe Couillard has pushed back against an inexorable force as powerful as gravity itself—the compulsion of Quebec politicians to stick their fussy noses into private business matters.

At this point, no deal has been signed. But the details floating around are quite precise, even if the final dollar figure has yet to be revealed. (Likely more than $1.5 billion, but certainly less than the $2 billion Cirque’s founder Guy Laliberté was hoping for when he hired Goldman Sachs last year to find a buyer.) Under the deal American private equity firm TPG Group would own 60 per cent of the Cirque, Shanghai-based conglomerate Fosun International would hold 20 per cent, while Quebec’s Caisse de dépôt et placement pension fund and Laliberté would each own 10 per cent.

Laliberté has insisted that the new owners keep Cirque’s headquarters in Montreal, and the buyers have reportedly agreed, but once Laliberté’s ownership is reduced to a rump position, he and Couillard have to both know there is no promise that Cirque’s new clown overlords won’t break if it means avoiding losses on their investment.

Which is why it’s so stunning to see Couillard defy tradition in Quebec politics. Yes, it’s true that last month Couillard made it known to Laliberté that he hopes a foreign-controlled Cirque would keep its headquarters in Montreal. But that’s not meddling. Certainly not by what counts as government interference in business in Quebec. Besides, what would you have expected him to say—”Go ahead and take all the bendy people, and turn the lights out when you go”?

We have a good idea how previous governments would have responded. When it looked like the American hardware chain Lowe’s would succeed with its hostile takeover of Quebec’s homegrown hardware chain Rona, both the Liberal government of Jean Charest and the subsequent Parti Québécois government of Pauline Marois trumpeted plans to block the deal. And that was for a company that sells two-by-fours. This is the Cirque, a cultural institution as much as it is an economic asset.

Make no mistake, the urge to meddle is still alive and thriving in some quarters in Quebec. On Thursday afternoon the federal NDP released a statement demanding Ottawa intervene with a review of the takeover transaction if it occurs. “The Cirque is part of our culture and we must make sure that this cultural gem will continue to make Quebec shine internationally,” the release quoted NDP Heritage critic Pierre Nantel, who represents the Quebec riding of Longueuil—Pierre-Boucher, as saying. “Let’s not forget that this great company started with a $1.5-million grant from the Lévesque government to Guy Laliberté’s troupe.”

Actually, let’s do forget that grant, shall we Mr. Nantel. Canadian governments at all levels have handed out untold sums in grants to arts groups over the decades, which is all fine and good. Now ask yourself how many of those recipients have taken the money and transformed it into a multinational company with operations in nearly 20 countries and annual revenue of $850 million. For anyone to claim government has some inherent right of first refusal because of a 32-year-old art grant is the height of hypocrisy. If only economic nationalists took as much ownership of the boondoggles and waste that are more often the result of their interference.

But we’re still left with the question of why Quebec has been so level-headed about Cirque’s change of ownership. Granted, there’s still plenty of time for a grassroots backlash to form, for Couillard to feel compelled to act and for silly heads to prevail. That’s unlikely to happen though. Part of the reason is that this isn’t a hostile takeover, as was the case with Rona. A bigger reason is the growing awareness, in government but across the province, that the Cirque is in serious trouble and drastic changes are needed. After a period of rapid expansion, the company has suffered several high-profile flops in recent years. Cirque’s revenue has been falling. Two years ago it had to lay off 600 employees after a string of failed shows.

Worst of all, the novelty of Cirque’s particular brand of entertainment has worn off in this contortionist-saturated world. Just look at this chart*, which shows the intensity of searches on Google for the words “Cirque du Soleil.”

Clearly if Quebec wants Cirque to succeed, the best thing that can happen for the company is to bring in fresh ideas from outside investors. The pool of investors in the province is simply too small for the task.

Let’s be clear, no one should believe for a second that Quebec’s response to Cirque’s impending sale means the province is completely getting out of picking corporate winners and losers. The speed with which the province’s economy minister Jacques Daoust galloped to the aid of Bombardier with the guarantee of a life line just two months ago is proof of that. The bigger test for Couillard’s government will come if Bombardier moves to sell its rail division.

Even so, by resisting the urge to interfere with Cirque’s private dealings, the Couillard government has shown it is prepared to explore a different course in relations with Quebec businesses. It’s a move worthy of applause.

*A note on the chart. Google search term numbers show the intensity of searches for a topic relative to the highest point on the chart. It does not show absolute search volume.