Where all that money is going

Tuition rises, class size grows, and the bureaucracy gets big 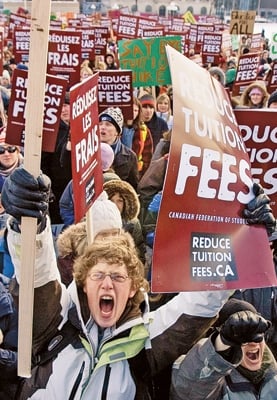 The annual tuition fee debate has begun. This is the war dance that takes place every winter, when senior university administrators announce that students yet again face substantial hikes. Those administrators roll out the rationale they use every year: the increases are necessary to protect educational quality, top faculty costs top dollar, and the only alternatives are declining quality and staff layoffs or increased government funding. Students get angry. They claim that university is becoming a place for only the wealthy, that quality has suffered enough, and that debt loads are becoming unmanageable. Boards of governors—the guardians of public interest when it comes to the operation of universities—wring their hands and voice genuine empathy. They hope for solutions but find none. And then, as they always do, they approve the increases proposed by senior administration.

Here’s the thing: the students have a point—at least according to a detailed analysis of the finances of Canada’s largest 25 universities. A study of 21 years of data compiled annually by StatsCan for the Canadian Association of University Business Officers (CAUBO) reveals some startling trends. In 1987-88, the top 25 universities spent $6 billion across all their activities; by 2007-08, that had increased by almost four times inflation, to $21 billion. That equates to about 13 per cent of Canada’s health care budget, or more than the entire defence budget. And that’s only the top 25 schools.

Funding trends have driven a stronger focus on research. In 1988, sponsored research—commissioned by governments and corporations—accounted for 14.9 per cent of top 25 expenditures; by 2008, it consumed 24.7 per cent. A parallel decline (from 67.1 per cent to 54.8 per cent) occurred in general operating expenditures. This includes the areas central to undergraduate teaching and student life: instruction, the library, student services, and other functions such as central administration.

The analysis suggests teaching has not just fallen down the priority list; it has been pushed there by conscious resource allocation decisions. Less money is reaching the classroom. In 1988, almost 65 per cent of operating funds were directed to instruction and non-sponsored research, where the teaching happens. By 2008 this had fallen to 58 per cent—an effective cutback of $30 million a year at the average top 25 school. Within the G13 group of Canada’s largest, research-focused universities, the cutback averages $35 million, and $45 million for the top 5 (Toronto, UBC, Alberta, McGill and Montréal).

Even this reduced level of classroom funding now seems less focused on providing quality education. A key measure of university commitment to quality is faculty salary expenditure. However, only 57.6 per cent of instruction and non-sponsored research budgets now goes to academic salaries—well below the 64.2 per cent of 1987-88. These “savings” are used to fund increased cost levels for non-academic staff, travel, benefits and professional fees. On top of that, there has been a swing away from full faculty and toward cheaper, less experienced teaching assistants and sessional lecturers.

In short, the analysis confirms what students and faculty have long suspected: a disproportionate share of new income has been used not to maintain quality, but to expand the central bureaucracy. That is especially vexing for students, who have absorbed huge fee increases. In 1987-88, the average top 25 university derived $24 million, or 15 per cent, of operating income from fees. Last year, it was $160 million and 34 per cent. For this, students face larger class sizes and, increasingly, teachers who aren’t much older than they are.

Why does instruction continue to suffer when general operating incomes, especially student fees, have increased faster than inflation? Why are increases of even this magnitude not enough? One possibility: many top universities have set themselves the task of joining the elite group of world leaders. They’ve appointed highly driven executives who, in turn, have built burgeoning support teams. These are big-salary employees. The very exercise of pursuing higher rankings within global academia may be deflecting funds away from the classroom, increasing the financial burden on students and lowering standards in undergraduate education.
Have Canada’s top universities become preoccupied with status rather than excellence? We cannot succeed without dynamic universities, and they need adequate resources to do the job well. But for all their collective intellect, they are not immune to certain dangers. As publicly funded institutions, their missions are a matter for public debate, not internal aspiration. They can’t preach one thing in their M.B.A. classes but practise another in their operations.

Boards of governors risk a damning failure of governance if they do not address these concerns. Even if they do, they might encounter in university administrators the tendency to resist unflattering comparisons by trying to discredit the data. But this data is not easily dismissed. The universities themselves provided it.

Consultant W.D. Smith worked with students and university administrators in Canada and abroad for 25 years before retiring in 2008.