Or do they? This is from an article posted at the David Suzuki Foundation site:

While Canada’s federal representatives — including Environment Minister Peter Kent — were doing all they could to obstruct the talks, public opinion and social research institute The Environics Institute was conducting its annual check with Canadians on our thoughts about climate change.

The findings of the new poll couldn’t paint a starker picture of the divide between Canadians and their political leaders.

More and more of us are confident about the science that shows climate change is happening and that we are mainly responsible for it, largely through burning fossil fuels. The good news in the poll concerns what Canadians believe we should do to tackle this serious issue. Across the country and among all political stripes, most of us believe that governments need to do far more to curb emissions. As the pollsters note, “a clear majority believe the problem is real, that government must take the lead role through new regulations and standards, and that citizens like themselves must help pay for the necessary actions through taxes and higher prices for the goods and services they consume.”

Here are the polling numbers about Canadians’ willingness to pay: 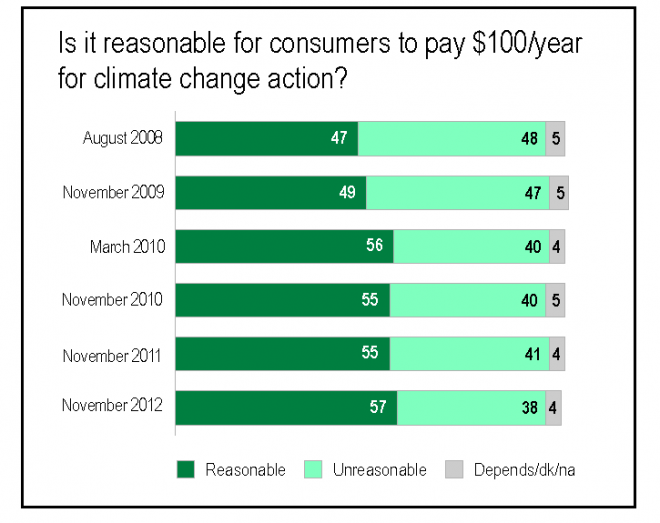 The steady increase in the percentage of people willing to pay for action on climate change is encouraging. But if I were a politician, I wouldn’t interpret these numbers as a mandate for effective action to reduce GHG emissions.

$100/year times a population of 35 million works out to $3.5 billion that Canadians are willing pay. According to Figure 1 of this NRTEE report (the same one I used in this post), Canada’s GHG emissions are running around 700 Mt. $3.5 billion divided by 700 Mt is $5/tonne.

This passage from Andrew Leach puts those numbers in perspective:

The David Suzuki Foundation and the Pembina Institute describe the emissions reduction goals put forward by the Canadian government as modest in their Climate Leadership, Economic Prosperity report, and the David Suzuki Foundation has called Alberta’s Climate Change Strategy weak (see p. 18-19). Modeling work done for the report by Mark Jaccard and Associates showed that Canada would need a carbon price of at least $100/ton by 2020 to meet our modest targets.

(Emphasis in the original)

According to that Environics poll, a small majority of Canadians are willing to pay one-twentieth of what it would cost to implement a modest climate change agenda.

You can see the problem. So can politicians.