Why Canada’s manufacturing sector is stronger than you think

The numbers say it all

Last week, BMO research cited continued increase in Canada’s net trade balance in energy, and increases in our net trade deficit in manufactured goods. This brought about some hand-wringing from Daniel Tencer at the Huffington Post, who wrote that, “Canada no longer knows how to sell anything to the world except oil and gas.”  Others in this space have written a great deal about why trade deficits aren’t, on their face, good or bad, so I’ll leave that for now and move on to other things.

Tencer’s piece was entitled Canada’s Great Economic Divide, In One Chart, and the chart is shown below. It shows net exports of energy and non-energy goods from Canada since 1988. The story seems clear, but all is not always as it appears. 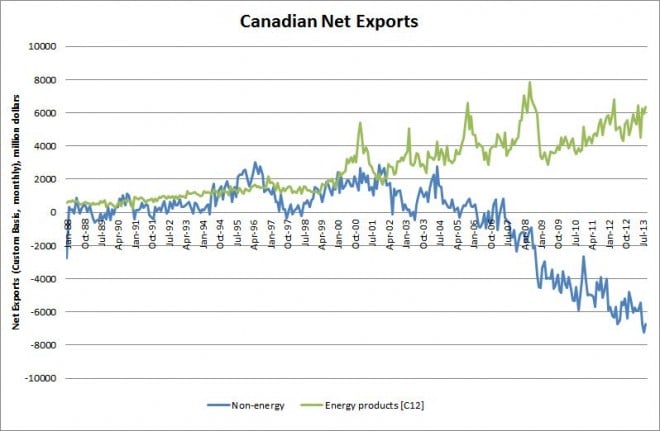 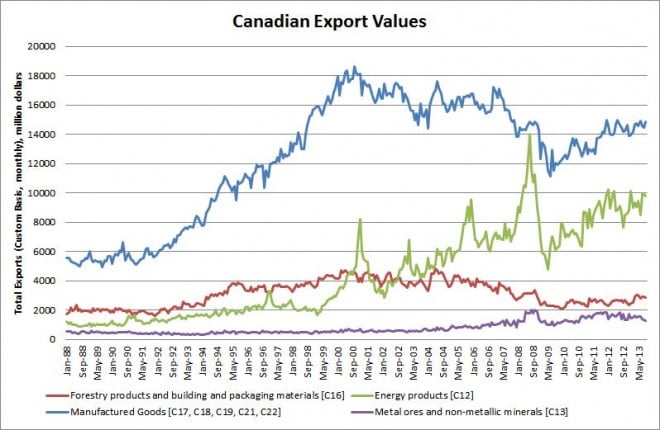 As you can see from the graph above, manufactured goods including cars and car parts, aerospace, machinery and equipment, and electronics still represent more of what we sell to the rest of the world than anything else. If you included in the manufactured goods the so-called valued-added energy, forest, and mineral products, that share would get even larger.

Even more surprisingly, although we hear a lot about how manufacturing exports have declined (some people even blame the Dutch for that), they have grown significantly since the depths of the Great Recession. While energy exports have grown rapidly (12% per year on average) since June, 2009, exports of manufactured products have increased at a rate of 7% per year over the same time period.

The story, if there is one, is not so much what we don’t sell to others but what we don’t buy from ourselves. If you look at the same data on imports, you’ll see what’s driving the story in the BMO research. 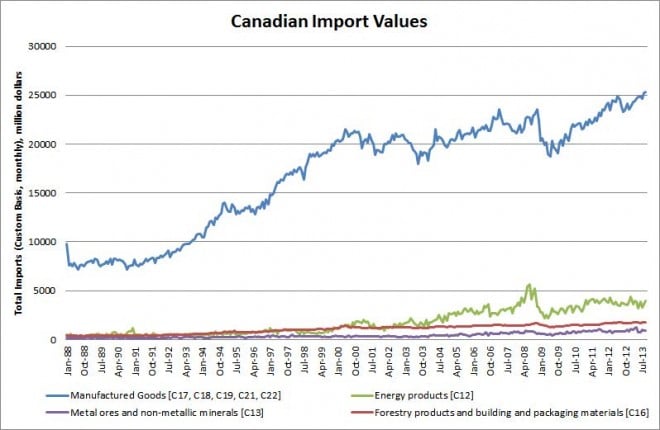 I guess, at least for the time being, Canadians’ worlds haven’t gotten that much smaller.  And rest assured, we still know how to sell about $18 billion per month of things to the world which are not oil and gas.