Why Canadian homeowners are likely just as vulnerable as Americans were

Ben Rabidoux is is an analyst at M Hanson Advisors, a market research firm, where he focuses on Canadian mortgage and credit trends and their implications for the broader economy. He blogs regularly about the housing market at The Economic Analyst. Follow Ben on Twitter @BenRabidoux.

If you listen to our banks, Canadian homeowners have nothing to worry about. According to Scotia’s latest housing outlook, for example: “Canadian household balance sheets remain in reasonably good shape, with homeowners’ equity in real estate assets averaging 67% compared with 41% in the United States.” In other words, if the average Canadian family were to sell their house at current market prices and pay off their mortgage, they’d be left with an amount equal to 67 per cent of the value of the house. An American household, by contrast, would be left with a mere 41 per cent. Sounds reassuring, no?

It certainly does. But how useful is it to compare Canadians’ equity in an overheated housing market to Americans’ equity in a post-bust real estate wasteland, where homeowners are paying off mortgages on houses whose value has collapsed?

Reading between the headline numbers: The unsettling truth 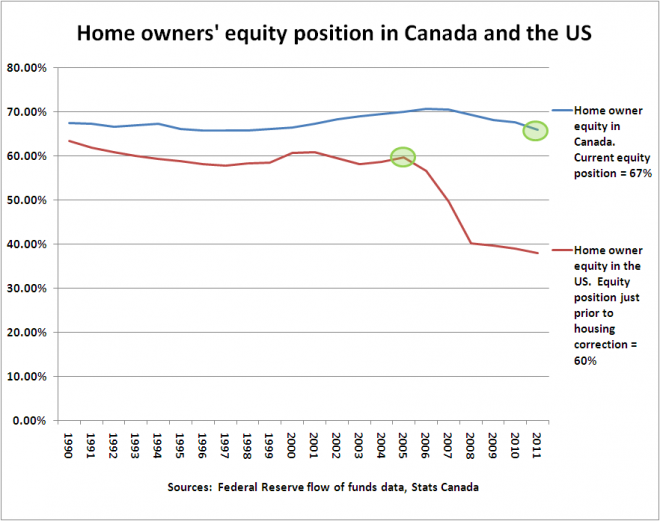 Canada is still marginally better off, but that’s really no reason to pat ourselves on the back. Here’s why:

1) First of all, unlike Canadians, Americans can deduct the interest they pay on their mortgage from their taxes, which explains why Americans have traditionally carried more real estate debt than us. The same mortgage is simply more affordable in the U.S. than in Canada based on a similar income.

2) A standard U.S. mortgage term is 30 years while in Canada it is five years, meaning U.S. homeowners are much more sheltered from the risk of rising interest rates. This also represents a massive incentive for U.S. homeowners to take on larger mortgages and not pay them off as quickly as Canadians, who must be continually cognizant that interest rates and hence payments may reset substantially higher at their next mortgage renewal.

3) Finally, despite the fact that housing prices in Canada have been climbing for the past 10 years or so, Canadians’ home equity is lower today than in was in 2000. This speaks quite strongly to how down payments have deteriorated over time and home equity withdrawals via refinancing have spiked. Even the U.S. managed to perform better than us on this front: There average equity positions held steady up to the peak of the housing bubble. And note that these calculations do not include Home Equity Lines of Credit, which are nonetheless a claim on the equity of the home. (I address this point in detail below.) 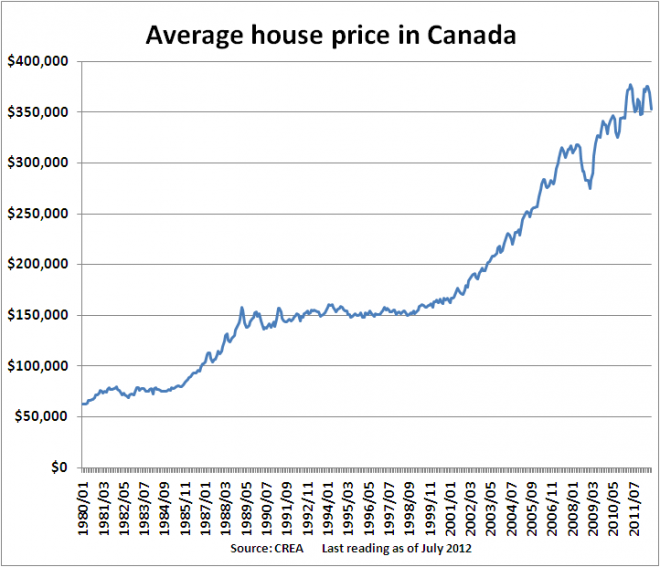 4) The calculations both Statistics Canada and the Federal Reserve use to measure average equity include households with no mortgage as well. This becomes problematic when one tries to compare Canada to the U.S. because significantly more Canadian households own their homes outright than Americans do. According to the Canadian Association of Accredited Mortgage Professionals, an estimated 39.2 per cent of Canadian households have no mortgage at all. According to the 2007 American Community Survey, by contrast, only 31.6 per cent of Americans own their homes mortgage-free. All this means is that Canada’s equity numbers are skewed upwards, masking the potential vulnerability of Canadian owners with a mortgage sitting at the bottom of the credit pyramid. If we could strip out households with no mortgage from both Canada and U.S. estimates, I suspect we would find that the equity position of Canadian households looks remarkably similar to that of the U.S. at peak. And it’s this group, after all, that we are most concerned with.

The other ‘minor’ detail many are overlooking: HELOCs

It’s also important to note that neither the U.S. nor Canada include HELOCs in estimates of owner equity, which is rather odd given that they nonetheless represent a claim on said equity. In Canada, in particular, where the Bank of Canada estimates total consumer credit amounts to roughly $486 billion, HELOCs have been by far the fastest growing form of consumer debt in the country over the past decade. 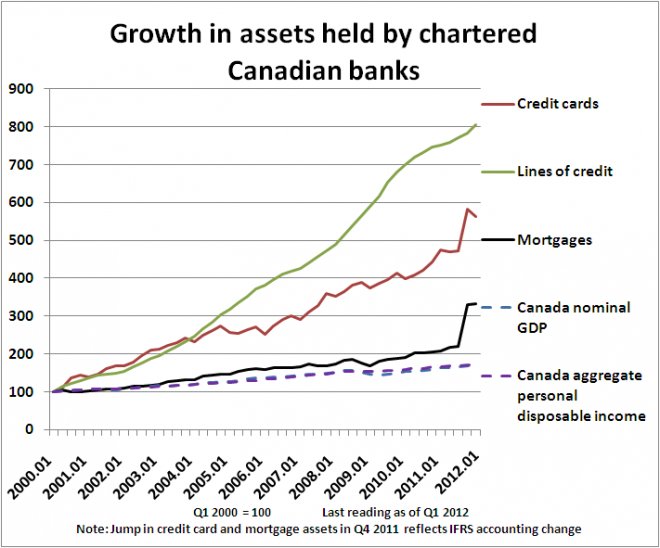 Most importantly, the size of outstanding HELOC debt compared to GDP in Canada dwarfs that in the U.S. Data from the Office of the Superintendent of Financial Institutions indicates that chartered financial institutions in Canada hold $206 billion in HELOC debt. (And note that this does not include credit unions and other lenders that are not federally regulated financial institutions.) This amounts to roughly 12 per cent of Canadian GDP. By contrast, in 2010 a report by consumer reporting agency Equifax estimated that there were about $649 billions worth of HELOC debt outstanding in the U.S., or only about four per cent of GDP.

The average Canadian household with a mortgage is in substantially worse shape than a cursory reading of the numbers would indicate. If we could strip away all non-mortgaged households and factor-in HELOC debt, we might find that the balance sheet of Canadian households looks remarkably similar to that of American families just before the housing market crash.