Why do Canadian stores even offer Black Friday sales?

There are pitfalls for both sides: Black Friday is a 'zero-sum game' for retailers, while Canadian shoppers can get better deals on Boxing Day 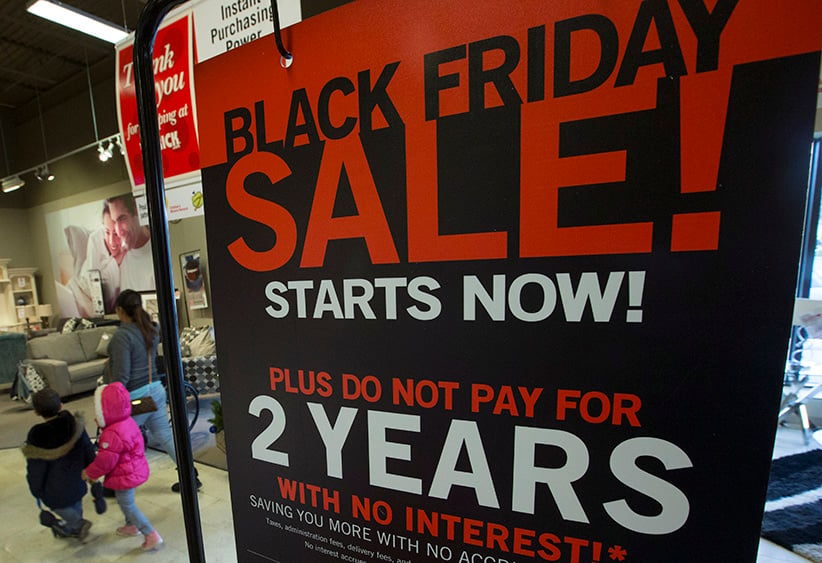 Despite its U.S. origins, Canadians have embraced Black Friday shopping with a fervour normally reserved for play-off hockey games. Consider the statistics being tossed around in recent weeks: More than half of all Canadians—or 19.3 million people—plan to take advantage of Black Friday and Cyber Monday (its online companion) sales, while 1.2 million say will they call in sick to work on Nov. 27, according to a survey by IPG Mediabrands, an ad-buying agency. That’s in addition to an estimated 6.4 million vacation days that will be taken.

But while it’s often assumed long lineups and frazzled sales clerks translates into big bucks for retailers, industry-wide sales events like Black Friday, which occurs the day after American Thanksgiving, generally have a poor track record of profitability. “As retailers, we still suffer from a disease where we want to pile it high and watch it fly, and then wonder why we didn’t make any money,” says Jim Danahy, the CEO of consulting firm CustomerLab. Nevertheless he says stores feel pressured to participate in Black Friday events because they fear losing customers to rivals—which now includes online discounters like Amazon. “It’s a zero-sum game.”

The big downside to Black Friday is that it eats into retailers’ margins at a time of year when consumers were prepared to shell out hard-earned money anyway. And, breathless surveys about Canadians’ shopping intentions aside, there’s scant evidence to suggest retailers in this country are making up the difference by moving truckloads of merchandise. A recent study by Statistics Canada found the share of annual retail sales in November ticked up only marginally—to 8.5 per cent from 8.4 per cent— since Black Friday first made an appearance on the Canadian shopping scene back in 2007.

Store managers, of course, have other tricks up their sleeves to make Black Friday profitable. Usually it involves pursuing some type of high-low pricing strategy: setting regular prices higher so that impressive 60 percent discounts can be offered, or heavily marking down certain items while keeping others at a regular price. In both cases, the goal is to deliver an average profit margin that makes the early opening hours and extra staffing worthwhile. Other strategies include layered discounts that fool shoppers who are bad at math or frequent price changes that make comparison shopping impossible. Citing data by a market tracking firm, the Wall Street Journal reported Amazon made over 650 prices changes to 180 different items during the first three weeks of this month—a 50 per cent increase in price volatility over last year.

Yet, despite the attempts at obfuscation, Black Friday shoppers still tend to come out ahead. “Price-sensitive consumers who are prepared to go through the pain and suffering associated with lineups, door-crashers and silly store environments are the most price savvy of all, by and large,” Danahy says. “Most have a list and are highly disciplined. They’re buying exactly what’s on their list for less than they would have paid 48 hours earlier.” In fact, U.K. retailers were so disappointed with last year’s Black Friday sales—yes, the trend has migrated across the pond, too—that many are desperately trying to scale back their sales in 2015.

So why did Canadian retailers bother embracing Black Friday in the first place? Panic, for the most part. The trend first snuck across the border in 2007 as Canadian retailers sought to dissuade customers, armed with a loonie at par, from travelling south to the U.S. to do their holiday shopping. But it really took off in the years following the 2009 recession as more U.S. chains like Target set up shop in Canada and local retailers pulled out all the stops to stay competitive.

Six years later Black Friday has become a regular feature on the Canadian retail calendar, although consumers seeking the best discounts would be wise to tread carefully. A recent study by consulting firm Colliers International found that 36 per cent of surveyed products offered by Canadian chains received deeper discounts on Boxing Day than on Black Friday. By contrast, only 16 per cent of products were marked down further on Black Friday than on Boxing Day, while almost half were discounted by the same amount for both sales. “Black Friday sales prices, on both sides of the border, are often touted as the lowest prices of the year,” the study noted. “For Canadians, however, the lowest prices of the year have traditionally been found at Boxing Day or Boxing Week sales immediately following Christmas.”

That may be because Boxing Day sales were originally conceived by Canadian store owners as a tool to clear out unsold holiday merchandise—not as a big money-maker.“The absolute gross margin delivery in the week following Christmas was always substantially lower than the rest of the year,” Danahy says. The origins of Black Friday, on the other hand, are less clear. The event is often said to mark the time of year when retailers pay off their overhead and begin making money—hence, their balance sheets move into the “black”—but others have traced it to an annual Army-Navy football game that resulted in hordes of shoppers descending on Philadelphia the day after Thanksgiving.

What remains to be seen is whether Black Friday will experience the same type of “creep” in Canada that it has south of the border. For that past few years, big U.S. retailers like Macy’s and Wal-Mart have started their Black Friday sales on Thanksgiving Day and continued them right through the weekend, despite public outcries about the potential to overshadow an important family holiday. Radio Shack, in a bid to recover from bankruptcy (in the U.S.), went a step further this year by starting its Black Friday sale on Wednesday—the day before U.S. Thanksgiving.

If the same thing happens in Canada—and there’s no reason to think it won’t—retailers here may wish they had never flirted with an American tradition that even U.S. chains are beginning to question. As Danahy puts it, Boxing Day is sort of a “mistake day” for retailers who need to atone for their pre-holiday ordering sins. Black Friday and Cyber Monday? He’s taken to calling them “give away your profit days.”