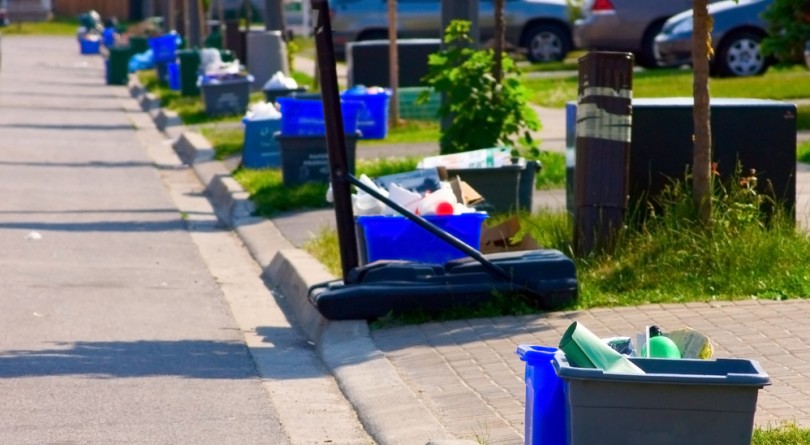 Each week, millions of anxious Canadians struggle with the same existential question: is it garbage or recycling day?  Remembering which colour of bin to put out is just a pain for most of us, but the Royal Bank of Canada sees it as a “pain point” they can use to their advantage, as a play on data collection that can turn you into a new or bigger customer.

Knowing they have a 50-per-cent chance of guessing wrong, more than 30,000 people in Toronto visit the services page on Toronto.ca each month to view the schedule. Many more simply peek through their window to see which bin the neighbours have put out by the curb. And about a million calendars are mailed out yearly to residents by the city, to stay on top of it. Want someone to make it easier? RBC has reached out to help and to get it, all you have to do is sign up to its garbageday.co website—with your personal information.

Mind you, unless you are one of that rare breed who regularly read deep into the terms and conditions on websites, you may never even know it’s RBC you are relying on for the helpful reminders, or that the bank will consolidate your personal information to target you with future marketing.

In today’s marketing world, the banks are data-rich but handcuffed by privacy law in how they use that data for targeting. A content play like GarbageDay, a free online service which sends registered users a text or e-mail notification about which bin is being collected on their street on any given day, allows RBC to collect and utilize personal data in a relationship that, in this case, is all about garbage or recycling rather than RRSPs, mutual funds or the private details of your bank account.

GarbageDay is being promoted via sponsored tweets, and @GarbageDayCo has more than 200 followers on the social media platform as it rolls out in Ontario. Social media users exposed to the posts would have to dig deeper to see that the service is owned by RBC Ventures, a business unit of RBC that is focused on building what a spokesperson describes as “useful solutions” for consumers and businesses.

RBC Ventures currently has several entities in market to provide useful content to consumers around different subject areas, including an auto-focused entity called DRIVE, and Ownr, which provides a suite of services aimed at entrepreneurs. GarbageDay, according to its website, will provide a number of additional content/informational services in the future, all with the goal of making “managing a home easier for you.”

According to RBC, internal research indicated that keeping track of which bins to put out each week was a “real pain point” for Toronto home owners. The bank acknowledged that agreeing to GarbageDay’s terms and conditions means that RBC Ventures “may reach out with offers that we think users will like and also notify users when we launch additional home solutions.”

RBC says that its name is “transparent and frequently cited” on the GarbageDay website, noting that it can be found on both the “About Us” and “Contact Us” sections, as well as the “legal,” “accessibility,” “privacy policy,” and “terms and conditions” sections in so-called “mouse type.”

However, a privacy researcher believes that most consumers are ignorant of the actual opt-in terms, and will focus only on the “End the guesswork” clickwrap (the button users click to accept all terms and conditions of an online service) that follows the mandatory fill-in fields (your address, mobile number and e-mail address) on the GarbageDay website.

“While [the clickwrap] helps companies get people through consent processes quickly, which in many respects is what users seem to want, it does circumvent consent processes,” says Jonathan Obar, assistant professor in the department of communication studies at York University.

Obar says that GarbageDay’s terms and conditions of use, which allow for users’ personal data — including information about “financial behaviour such as your payment history and credit worthiness” — to be collected and used for, among other things, determining eligibility for products and services offered by RBC, raise some privacy concerns.

“This is supposed to be a fun, useful app about garbage pick-up,” he says. “Why would data that’s being collected from this service be relevant to eligibility for [RBC] products and services?”

READ: Why banks are so slow to lower lending rates, but so quick to hike them

Brett Channer, CEO of Toronto advertising agency Mass Minority, says that RBC — the country’s largest lender with approximately $1.28 trillion in assets — will “totally” use the data collected via GarbageDay registrations to market its products and services.

“A month from now, they’re getting a notice [saying] ‘Is your mortgage coming up for renewal in the next six months? We can do it earlier.’ That’s what it’s going to do,” he says.

Data is increasingly the lifeblood of modern marketing, fuelling brands’ efforts in the customer relationship management (CRM) space. “As the eradication of advertising is upon us, [taking with it] the way to transform people into customers, these brands are desperate to find other ways,” says Channer.

While he calls GarbageDay a “nice [value] exchange that doesn’t deserve to be hidden,” Channer says that RBC’s efforts to conceal its association reflects brands’ wariness about being associated with advertising in an era of ad avoidance.

Some Twitter users have already called out RBC for not making its association with GarbageDay more apparent. “Data mining disguised as a helpful neighbour” is one accusation. “Is this just [an] @RBC trick to get your online data habits?” asks another.

Is this just a @RBC trick to get your online data habits? Why hide the fact it is an RBC product?

While RBC contends that it is being fully transparent about its affiliation with GarbageDay, a 2016 research study co-authored by Obar and the University of Connecticut’s Anne Oeldorf-Hirsch suggests that only a fraction of its customers who click on the “End the guesswork” clickwrap are aware they are granting it access to highly personal data.

In that study, the researchers created a fake registration page for a fictitious social network called NameDrop, whose terms of service agreement contained several so-called “gotcha clauses” — including sharing their personal data with the U.S. National Security Agency, and providing their first-born child as payment for access.

READ: The race to be Canada’s first $1-trillion bank

According to the study, 98% of people completely overlooked the terms of service clauses, and the average reading time for the section was just 51 seconds. In a self-report assessment of survey participants related to reading times of the policy pages for social media networks like Facebook and Twitter, respondents cited the nuisance factor and “information overload” as key reasons why they didn’t fully read the terms and conditions page.

There is growing awareness and concern over how consumers’ online data is being collected and harvested in the wake of the recent Facebook and Cambridge Analytica scandals related to Donald Trump’s presidential campaign and the May 25 introduction of the European Union’s new General Data Protection Regulation (GDPR) protections.

While you may not have heard of the GDPR, it’s the reason your in-box has recently been flooded with e-mails bearing subject lines like “Your action required,” “We’ve Updated/Improved Our Privacy Policy” and more plaintive messages like “Let’s not say goodbye.” If they don’t receive a fresh opt-in from you, many companies will no longer be legally able to reach you in the same way.

In basic terms, the GDPR is a legal framework that sets tighter guidelines for data collection, storage and usage, while imposing revenue based fines of 10 million Euros or 2% of worldwide revenue for the prior year (whichever is higher) at the lower level – and double that at the higher level – for its improper use.

The RBC spokesperson says that the company will only use personal information “for the purposes communicated in our client agreements,” and will obtain consent before using information for a purpose not listed in its current agreement.

“We are strongly committed to being transparent and explicit around customer consent, and we’ve increased our investment in this area to make sure that we continue to stay ahead of this evolving issue.”

But one GarbageDay user told Maclean’s she had “absolutely no idea” that she had consented to her personal financial data being shared with RBC, calling its actions a “violation of privacy.”

In a Twitter exchange, she informed GarbageDay that she had traditionally relied on the calendar that the city sends to one million Toronto households each December.

Jim McKay, general manager with the city’s solid waste management service, says that collection calendar is “by far” the most popular source of information for information about the city’s waste management system. “We keep doing these surveys thinking everyone is moving to online platforms, and yet the traditional collection calendar is always number one on the list,” he says. “As long as its number one, we’re going to keep providing it.”

GarbageDay, meanwhile, claims that its service is intended as a complement to the city’s literature, describing it as being “for those that want a proactive reminder vs. looking at the calendar each week.”