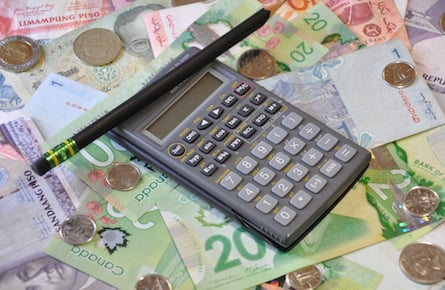 The Canadian dollar has depreciated by more than six per cent against the US dollar since the Bank of Canada dropped its tightening bias in October. The CAD may continue to depreciate, or it may not: changes in exchange rates are notoriously difficult to predict. The Bank of Canada is presumably not displeased with this development. Lower exchange rates—and lower long-term interest rates—are what you’d expect from a softening of its stance.

But what about the rest of us? Exporters—especially those whose sales are priced in US dollars—will see an increase in revenues. On the other hand, consumers are made worse off by the higher cost of imports—and consumer welfare is what really matters. Why would the Bank of Canada want to reduce Canadians’ purchasing power?

This increase isn’t due to a surge in the demand for labour so much as the fact that inflation has been low: year-over-year CPI inflation has been below the Bank of Canada’s 2 per cent target for the past 18 months. It’s not a coincidence that the increase in real wages that started in mid-2012 coincided with the drop in inflation.

Nor is it likely a coincidence that the disinflation-induced rise in real wages began roughly when the employment recovery lost momentum:

(I’m using the prime-age employment rate for reasons I explain in this recent Econowatch post.)

As far as the the Bank of Canada is concerned, low inflation is a problem in itself: it has a mandate to keep inflation at or near 2 per cent. It’s harder to make the case that high real wages are a problem for the rest of us.

It’s useful to look at it as a coordination problem. We may all believe that a more rapid rate of job creation would be a good thing, and that high real wages are an obstacle to faster employment growth. But each of us also knows that it doesn’t make any sense to volunteer for a wage cut: one worker’s wage won’t affect the average. Engineering an economy-wide wage reduction would be a protracted exercise in waiting for someone else to go first.

An exchange rate depreciation is a far simpler way of reducing wages across the board, and the ability to do so is one of the strongest arguments for maintaining a policy of flexible exchange rates. Economies that have fixed exchange rates —such as the members of the Eurozone—have a much more difficult time of it. Spain is an instructive example. Spanish wages were driven up during its pre-crisis real estate boom and labour costs have remained high. If Spain still had its own currency, reducing wage costs could be achieved quickly by means of an exchange rate depreciation. Instead, Spanish workers are obliged to deal with the long, slow grind of high unemployment and wage concessions.

In this context, the depreciation of the Canadian dollar can be viewed as good news: it is better to have a currency that can depreciate fairly rapidly when real wages are too high. But the fact that we are obliged to reduce real wages in the first place can hardly be viewed as a positive development.