Econ 101: What you need to know about carbon taxes and cap-and-trade 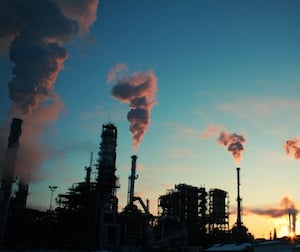 I didn’t think it was possible for the climate change policy debate to drift even further from reality than it already had. But a series of  posts by Maclean’s Aaron Wherry—most recently here and summarised here—has proven me wrong. The politics of climate change has always required a certain suspension of disbelief. But the Conservatives’ attempt to portray the NDP’s climate change policy as the equivalent of a carbon tax and the NDP’s indignant rebuttal to the effect that their policy is in fact a cap-and-trade model have advanced the transformation of the file into a form of kabuki.

To a first approximation, cap-and trade is the equivalent of a carbon tax. Here is the Econ 101 version of how the two work:

Before the policy, the intersection of the supply and demand curves for greenhouse gas-emitting products—point A on the graphs—will generate emissions equal to Q0, and the price will be P0. Suppose that the government wants to reduce the quantity to Q1.

So as far as prices and quantities go, the two policies are equivalent: as we go from A to B, quantities fall to the target Q1, and prices rise to P1. From the consumer’s point of view, that’s all that matters.

What distinguishes the two is what happens to T—the difference between the price the consumers pay at B and what it costs suppliers to produce at Q1. In the case of the carbon tax, the money goes to the government. But if output is capped at Q1, that difference is pure profit: a permit to produce one unit of output allows its owner to collect a rent equal to to the difference between the selling price and the cost of production. If permits are traded, their price will be bid up so that their price will be equal to T. So where that money goes depends on how the permits are allocated in the first place. If the permits are simply given to existing emitters, then those profits are pocketed by the firms. If the permits are auctioned off, the price will be bid up to T, and the government gets the money.

So if permits are auctioned off by the government, then cap-and-trade and a carbon tax are equivalent: same quantities, same prices, and the government gets revenues equal to the area in the green rectangle in the graphs.

When you leave the world of Econ 101, there are some important differences that can be the basis of a meaningful debate:

The distinction between carbon taxes and cap-and-trade, though, is a second-order debate. Why? Here’s an excerpt from an open letter signed by 250 or so economics professors—myself included—during the 2008 election:

Pricing carbon is the best approach from an economic perspective. Approaches to reaching any particular climate change goal that involve pricing carbon, such as carbon taxes and cap and trade systems, involve less economic damage to businesses and families than the alternatives. Carbon pricing is good for several reasons:

The best way to reduce the use of of fossil fuels is to increase their price. So yes, to the extent that the NDP is proposing a cap-and-trade model in which carbon is priced, their policy is essentially the same as a carbon tax. But then again, so was the cap-and-trade model the Conservatives offered as an alternative (sic) to the Liberals’ carbon tax. In 2008, all three major parties proposed climate change policies that would have increased the prices consumers would pay for fossil fuels, but only one admitted the point. It is possibly not a coincidence that the party that provided an accurate description of how its climate change policy would work is currently languishing in third place.

The Conservatives have since stepped back from their cap-and-trade stance, and moved onto an approach based on regulation. Here’s another extract from that open letter:

Regulation tends to be the most expensive way to meet a given climate change goal. Under regulation, businesses and consumers are mandated to take particular actions related to carbon use (e.g., use a particular technology or stay under mandated levels with no option to trade carbon emission rights). As a result, they are not given the choice of adjusting in the way that is best for them. Regulation therefore increases the costs of achieving carbon reduction compared to when pricing mechanisms such as a carbon tax or a cap and trade system are used. Furthermore, while regulations imposed on firms may appear to be so far removed from the typical consumer that they might think they will not bear these costs, this is not true. Those increased costs will be passed on to consumers due to normal market forces. There may be circumstances when regulation is the appropriate policy tool, but in most cases it is the most economically damaging.

So the Conservatives—defenders of markets and the foes of big government—are relying on the heavy hand of regulation, while the NDP is supporting the market-oriented approach preferred by economists. But the spectacle of the two largest parties playing against type—amusing in its own way—isn’t the part that’s divorced from reality. It’s the refusal to acknowledge that any effective climate change policy will affect consumers. Again from the open letter:

Policies that impose costs on producers (big or small) affect consumers. Some voters seem to think that policies like cap and trade, which apply directly to producers, have less impact on the prices they face than carbon taxes, where the impact can be seen immediately. In fact, voters would do better to assume that all such policies would, ultimately, affect the prices they pay. Indeed, since the goal of these policies is to change what we buy, policies applied to producers must affect the prices faced by consumers if they are to meet environmental goals. The argument that a policy capable of reducing carbon emissions will only affect producers is without economic merit.

Bismarck once noted that “politics is the art of the possible.” By this standard, promising to significantly reduce greenhouse gases without significantly increasing the prices faced by consumers isn’t politics. It’s theater, and it’s getting more bizarre as time goes on.