Why the U.S. has come down easy on white-collar crime

After five years of trying to bring justice to those behind the financial crisis, the U.S. has little to show but a handful of harmless fines against Wall Street firms 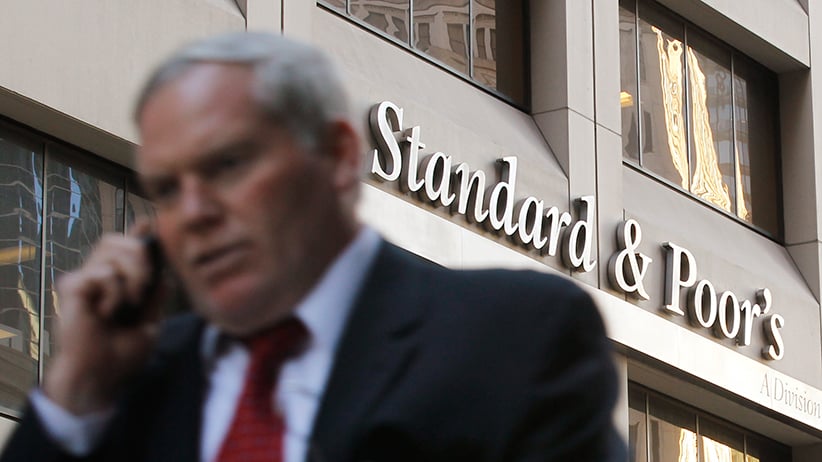 To hear U.S. Attorney General Eric Holder tell it, justice was served when Standard & Poor’s agreed to pay US$1.5 billion for its role in contributing to the devastating 2008 financial crisis. The ratings agency, recall, slapped “investment-grade” labels on scores of securities backed by risky subprime mortgages—loans handed to homebuyers with bad credit or no verifiable income—that were ultimately sold to unsuspecting investors. Emails entered as evidence by government prosecutors suggested several S&P employees knew full well that the products were garbage. One even joked about the looming danger in an email that reimagined the lyrics to Burning Down the House by Talking Heads. A snippet: “Watch out. Subprime is boiling over.”

Holder claimed that the deal to settle the government’s original $5-billion civil suit, revealed last week, was yet another example of the U.S. Department of Justice’s “aggressive” effort to “address every part of the financial system that contributed to the crisis.” But, five years after the meltdown, the dragnet has failed to put any Wall Street big shots behind bars. Nor has it obtained any criminal convictions against the powerful financial firms whose actions cratered the global financial system and paved the way for a brutal recession that threw millions out of work and wiped out trillions in household net worth. S&P’s negotiated settlement, for example, “contains no findings of violations of law”—a key point, since legal experts say it’s easier to launch investor class actions against a firm that’s admitted criminal wrongdoing.

U.S. officials blame a lack of sufficient evidence to press charges, but experts say a more likely explanation is a shortage of government resources, and perhaps willpower, to go toe-to-toe with America’s richest companies and the people who run them. Instead, prosecutors now seem to prefer hefty civil suits as their weapons of choice in fighting white-collar crime. They include a $7-billion settlement deal with Citigroup and a $13-billion deal with JP Morgan Chase. And, even when criminal charges are laid, they’re often settled with so-called “deferred prosecution agreements,” where no wrongdoing is admitted. (In Canada, too, there’s a push by the Ontario Securities Commission to have more “no fault” deals in a bid to clear case backlogs.) “The [dearth] of prosecutions is why people have ‘too big to jail’ concerns,” says Brandon Garrett, a University of Virginia law professor who wrote a book on the subject. “It’s not just about the financial crisis, but a problem across all sorts of corporate prosecutions.”

While criminal cases have been pursued against a handful of mortgage brokers and other low-level offenders, the absence of big-name Wall Street firms being prosecuted for the role in nearly taking out the global financial system has been striking. Last year, the New York Times Magazine suggested that only one prominent banker has been jailed for his actions during the crisis. Kareem Serageldin, an executive at Credit Suisse, received a 30-month sentence for concealing losses in the bank’s mortgage portfolio—a crime that almost certainly took place at dozens of institutions that dealt in toxic mortgage-backed securities. The U.S. Securities and Exchange Commission, meanwhile, has pressed civil charges against some 175 different corporate entities and individuals linked to the 2008 financial meltdown.

Prominent people such as Jed S. Rakoff, a U.S. District Court judge in New York, wonder whether there’s truly scant evidence to show Wall Street firms set out to deliberately deceive, thereby committing criminal acts. While Rakoff acknowledges it’s possible all the havoc was due to bubble-era euphoria and excessive risk-taking, he nevertheless noted in a New York Review of Books article last year that the Financial Crisis Inquiry Commission used variants of the word “fraud” “no fewer than 157 times” in its final report.

Similarly, the language used by government prosecutors has frequently implied the possibility of criminality. Holder’s remarks following the S&P deal reminded Americans that the Department of Justice’s suit “alleged that, from at least 2004 until 2007, S&P engaged in a scheme to defraud investors.” Citigroup, too, stood accused of misleading investors about the quality of mortgage-backed securities it was selling, with one of its traders warning in an email that the bank should “start praying.”

The failure to hold powerful firms (and their executives) to account criminally most likely reflects prosecutors’ lack of resources and a calculation that they were unlikely to prevail in court, according to Richard Powers, a senior lecturer at the University of Toronto’s Rotman School of Management. White-collar cases are notoriously expensive to prosecute, since they require sifting through tens of thousands, if not millions, of emails and documents in search of a few incriminating sentences. And, ever since 9/11, the focus of U.S. law enforcement has been on counterterrorism and homeland security—not investigating corporate crime. “They understand that these people are wealthy and have huge corporations behind them that are going to fight tooth and nail,” Powers says. “While you could certainly make the case that individuals are making these decisions and should be held accountable, the likelihood of a successful prosecution is remote.”

The nature of the alleged crimes being committed—lying to investors about the risks inherent in the complex financial products being sold—are also difficult to prove beyond a reasonable doubt. Case in point: Prosecutors tried, and failed, to get convictions in 2009 for two Bear Stearns hedge-fund managers who were accused of lying to investors about the health of their subprime mortgage portfolios. The case was seen as a test for future prosecutions related to the financial crisis.

Not everyone escaped jail during the post-crisis years, mind you. Hedge-fund manager and Galleon Group co-founder, Raj Rajaratnam, was successfully prosecuted for insider trading, while Ponzi-scheme creator Bernard Madoff received a 150-year sentence. However, both cases tended to involve more straightforward crimes not unlike ones that brought down Enron and WorldCom in an earlier era. “Some of those [other] cases were easier to prove individual intent, particularly if you had an executive looting his own company,” Garrett says.

Yet, the financial crisis aside, there’s little doubt such criminal convictions are becoming fewer and farther between. Garrett’s research showed that criminal penalties extracted from companies have soared over the past decade. While that suggests a crackdown is under way, Garrett says the number of criminal prosecutions is actually on the decline in the U.S. “The huge rise in fines in recent years is mostly explained by a handful of blockbuster cases,” he explains. “However, when you look at those big cases, the fines are often deeply discounted and much smaller than what they could have been under the sentencing guidelines.”

Garrett says another trend is for prosecutors to seek “deferred prosecution agreements.” The deals grant amnesty in exchange for commitments that the company will change its ways. Originally intended as a way to help juvenile offenders, deferred prosecution agreements are now routinely being applied to companies worth billions. While Garrett says such an approach makes sense in certain cases—you wouldn’t necessarily want a criminal conviction to blacklist a pharmaceutical company from doing business with Medicaid, or for a defence contractor to be barred from making weapons for the armed forces—there are concerns about “how carefully these agreements are negotiated when there’s no judge watching over them.” Nor is it clear what happens if a corporation doesn’t live up to its end of the bargain.

Moreover, Garrett says only about a third of such agreements result in individuals being prosecuted. That, in turn, creates the spectre of companies being treated as a sort of criminal scapegoat— incapable of being put in jail, but forced to pay massive penalties that are eventually passed along to investors and clients. Such an approach soon starts to resemble a cost of doing business for unscrupulous companies, as opposed to an effective deterrent. “Remember: These are all negotiated [settlements],” Powers says. “In each case, the penalties have been agreed upon because the company can afford it.”

In S&P’s case, parent McGraw-Hill Financial will fork over an amount that equates to about a third of its annual profits, minus an estimated $290 million or so that can probably be written off at tax time. And, with that, the era of legal reckoning for the firms that triggered the worst economic crisis since the Great Depression moves another step toward its unsatisfying close.