Not so good for economic growth if richer but less talented kids get the gig, says Mike Moffatt 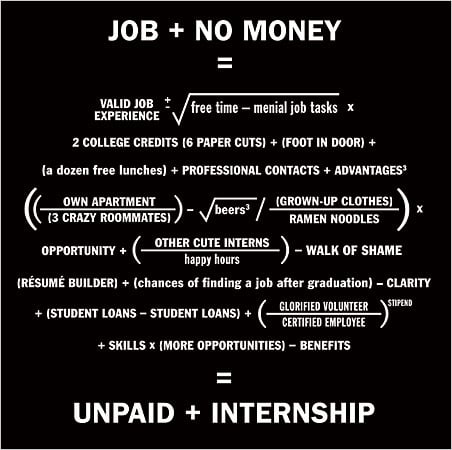 A dispute between Bell Mobility and two of its former interns has re-ignited the debate over unpaid internships.  It’s a discussion the country needs to have, from both a legal and economic point of view.  As an economist what I know about unpaid internships worries me; what I don’t know worries me doubly so.

The concerns include the exploitation of interns and firms calling work positions “internships” as a way of circumventing minimum wage laws.  The effect these positions have on inequality of opportunity cannot be overlooked.  Children from wealthier families can afford to take unpaid positions thanks to generous grants from ‘The Royal Bank of Mom and Dad’ while children from poorer families are effectively shut out.  If working as an intern is résumé enhancing, then lower income kids are disadvantaged in the labour market (even more than they already are).  This has macroeconomic effects beyond income inequality, since talented low-income people are shut out of jobs given to lower talent children from higher income families, thus slowing economic growth as jobs and candidates are mismatched.

One counter-argument to this concern is that unpaid internships are no more financially unequal than higher education (and perhaps less so).  Matthew Yglesias makes the best version of this argument I have seen in his post “Would Banning Unpaid Internships Increase Career Opportunities for Low-Income Kids?“:

My worry would be that we’ll replace zero-salary work/training positions with what amount to negative-salary training in the form of graduate school. Both the unpaid summer internship and the master’s degree in journalism are based on the idea that eight semesters worth of college leaves most people ill-qualified for a paying journalism job without some further seasoning. And while requiring people to spend months working for free does put a substantial barrier in the way of someone who can’t get financial assistance from his parents, requiring someone to spend a year or two paying many thousands of dollars to a school creates a much larger barrier.

Replacing internships with graduate school may or may not be an improvement as far as a learning experience.  The big difference, from an inequality perspective, is that educational institutions, albeit imperfectly, work to ensure equal access to low-income students through grants and loans.  This financial levelling of the playing field typically does not exist with unpaid internships.

Canada needs to do much more to learn the effects unpaid internships have on the youth labour market. Collecting the necessary data is the place to start.