Consumer prices edged up a mere 1.2 per cent in October

As TD Economics’ Francis Fong put it this morning, “Canadian inflation was stuck in neutral in October.” Consumer prices edged up a meagre 1.2 per cent last month compared to the same month in 2011, Statistics Canada said today. Meat and gasoline prices provided some upward pressure, rising by five and four per cent respectively on year-ago levels, but natural gas costs offset that, continuing a trend of steep year-over-year declines with a 11.6 per cent fall in October. Lower mortgage interest costs, which decreased 2.6 per cent, also helped keep a lid on consumer prices, as did “heightened retail competition (domestically and from the lure of cross-border shopping),” said BMO’s Robert Kavcic.

Consumer prices have been declining since May 2011. The Bank of Canada’s measure of core annual inflation, which strips out volatile energy and food prices, is registering similarly paltry growth, edging up 1.3 per cent in October. That’s well below the BOC’s target of 2 per cent inflation, meaning there’s ample margin for the Bank to keep its benchmark interest rate at rock bottom for the foreseeable future. 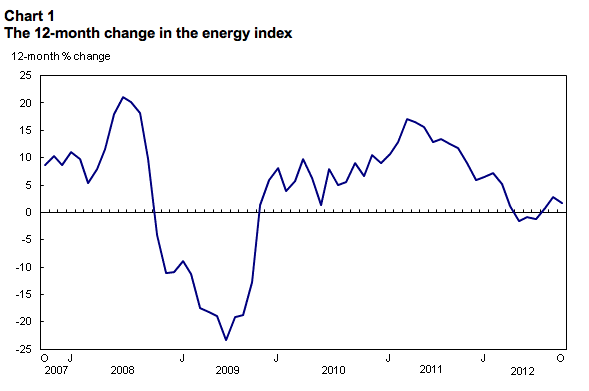