Despite spending billions on promoting democracy and Western-style liberalism around the world, Soros seems to have relatively little to show for his efforts, writes reviewer Chris Sorensen 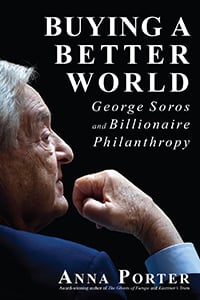 A recent study by Oxfam International calculated that one per cent of people on this planet lay claim to nearly half of all its collective wealth. The result, the report goes on to say, is that a handful of billionaires now wield an outsized influence on public policy, putting democracy at risk.

That is, except for George Soros. Despite being one of the world’s richest men and spending billions on promoting democracy and Western-style liberalism around the world through his Open Society Foundations, Soros seems to have relatively little to show for his efforts as he approaches his mid-80s. Russia has fallen back into authoritarian rule. The eurozone is at risk of imploding. And American-style capitalism nearly cratered the global economy. For his troubles, Soros has also managed to make himself an enemy of both the right—Ezra Levant accused him of being a Nazi collaborator for trying to avoid the death squads as a 14-year-old boy in Hungary (Levant later retracted the statement)—and the left, who aren’t pleased with his unrepentantly capitalist roots. He is, after all, “the man who broke the Bank of England.”

In her new book, Porter, an award-winning author and founder of the late, lamented Key Porter Books, surveys Soros’s impact on the global political scene, region by region, and wrestles with the question of how we should understand the man and his legacy. Porter explains the lens through which Soros looks at both economics and politics—the idea that there’s a two-way relationship between cause and effect. It’s complicated, to be sure, but it’s also what helped Soros make a killing in the currency markets.

However, Soros’s influence on the political sphere is much more difficult to evaluate, and, unfortunately, his intellectual bent makes him a rather difficult guy to grasp, which comes across in this meticulously researched book. In the end, Porter concludes it’s impossible to argue that Soros or Open Society have been successful in achieving their lofty goals, but quotes Winston Churchill: “Success consists of going from failure to failure without loss of enthusiasm.” Besides, Soros would be the first to admit that the world is complicated. Why should changing it be any different?