The No. 1 city in Canada is in a hybrid location that gives residents the option to commute or work within its limits 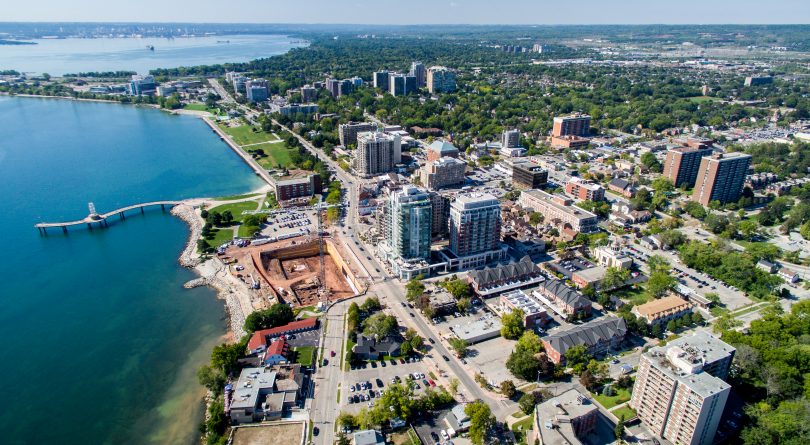 When Marianne Meed Ward moved to Burlington, Ont. 19 years ago, she was attracted by how the Toronto suburb seemed to offer a little bit of everything.

There’s proximity to the big city, of course, with housing prices that are more affordable and lot sizes that are bigger than those in the urban core. But Burlington also has easy access to the Hamilton-Niagara region, with its wineries, hiking trails along the escarpment and proximity to the U.S. border. Finally, there was a sense of community Meed Ward loved.

“When we first moved in, our neighbours brought us banana bread and welcomed us to the community. We knew everybody by name on our street,” says Meed Ward, who is now the Mayor of Burlington. “It’s got that community feel you don’t really have in a larger urban setting, and yet Burlington has everything a family, single person, young people or seniors would want. We’ve kind of got a little bit of everything here.”

The results of Maclean’s inaugural Best Communities in Canada ranking show Meed Ward’s opinion is backed up by the numbers. Burlington is this year’s winning city, ranking in the top 25 per cent in six out of 10 categories we measure. It’s also this year’s best place to raise a family.

READ: Why supercharged small towns are some of the best communities in Canada

Burlington’s hybrid location—sometimes grouped in with the Hamilton-Niagara region, sometimes considered part of the Greater Toronto Area—worked to its advantage. Residents have the option of commuting to either area or working within Burlington itself, which is home to many major manufacturing employers. And the city also offers access to the natural environment, something that can be hard to come by without spending hours in the car in other parts of the GTA.

The city is part of the Halton region, which has some of the lowest crime in the country. It’s got great weather—at least when you compare it to the rest of Canada—with relatively warm and dry winters and summers. And residents enjoy great access to health care and the amenities of the big city, including entertainment options.

Burlington’s main drawback is one it shares with the rest of the Toronto region—affordability. It may cost less to live there than it does in Toronto, but its average housing price of $888,000 is still higher than 89 per cent of the communities we ranked. Meed Ward says she’s trying to address this by targeting land speculators and trying to keep homes in the hands of people who actually plan to live in them, not just profit from them.

“It’s that combination of world-class attractions as well as a 10 to 15 minute drive from agricultural farming, hiking, skiing,” she says. “There’s nothing like it in this region. I don’t think there’s anything like it in Canada.”

Editor Claire Brownell discusses what makes a top community in Canada on The Big Story Podcast.

How Maclean’s picks the best communities in Canada

Many intangible things that determine quality of life can’t be quantified and measured, but a lot of tangible things can be. We gathered data on 415 towns and cities across the country and compared them in the following categories: Wealth and economy, affordability, population growth, taxes, commute, crime, weather, access to health care, amenities and culture. Environics Analytics was an invaluable partner, providing a significant amount of data about each community that can’t be found anywhere else. Please see the methodology page for more details. 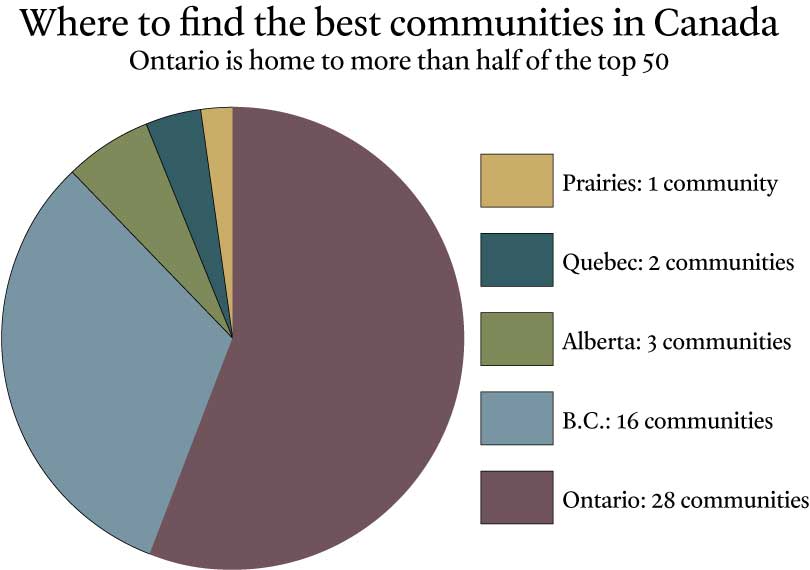 Trends and runners up

Communities in Ontario and B.C. dominate this year’s top 50. Ontario towns and cities account for 28 out of the top 50 and there are 16 municipalities from B.C. among the top spots. Those two provinces have an advantage because of their strong economies and good weather compared to the rest of the country. Ontario also has Canada’s lowest health care wait times and its small towns have the least crime in the country, while B.C. benefits from low income and sales taxes.

Only two cities in Quebec, the Greater Montreal suburbs of Deux-Montagnes and Blainville, made the top 50. There are three Alberta communities among the top spots: Calgary, the Rocky Mountains town of Canmore and the Edmonton-region city of St. Albert. The slowdown in Alberta’s economic recovery hurt that province’s standing in the rankings. In the Prairies, Weyburn, Sask. is the only city to crack the top 50.

While Atlantic Canada is beautiful, its low incomes and high unemployment rates tend to hurt its standings in the ranking. Halifax, the region’s top-ranked community, came in at no. 130.

Another trend we noticed this year is how many of the top spots went to towns with populations under 40,000. These small towns are all either within driving distance of a larger population centre or hubs of local economic activity in their own right, and beat out the big cities in affordability, low crime and community engagement. Read more about these supercharged small towns here.

We tried to weight the categories based on how important we think each would be to the average person, but everyone’s priorities are different. That’s why we provide this online tool that allows you to adjust the importance of each category to suit your tastes. You can also use the tool to get more information about how each community ranked and why.