Chart Week 2022: The price of housing is ballooning; and demand is up but construction is down 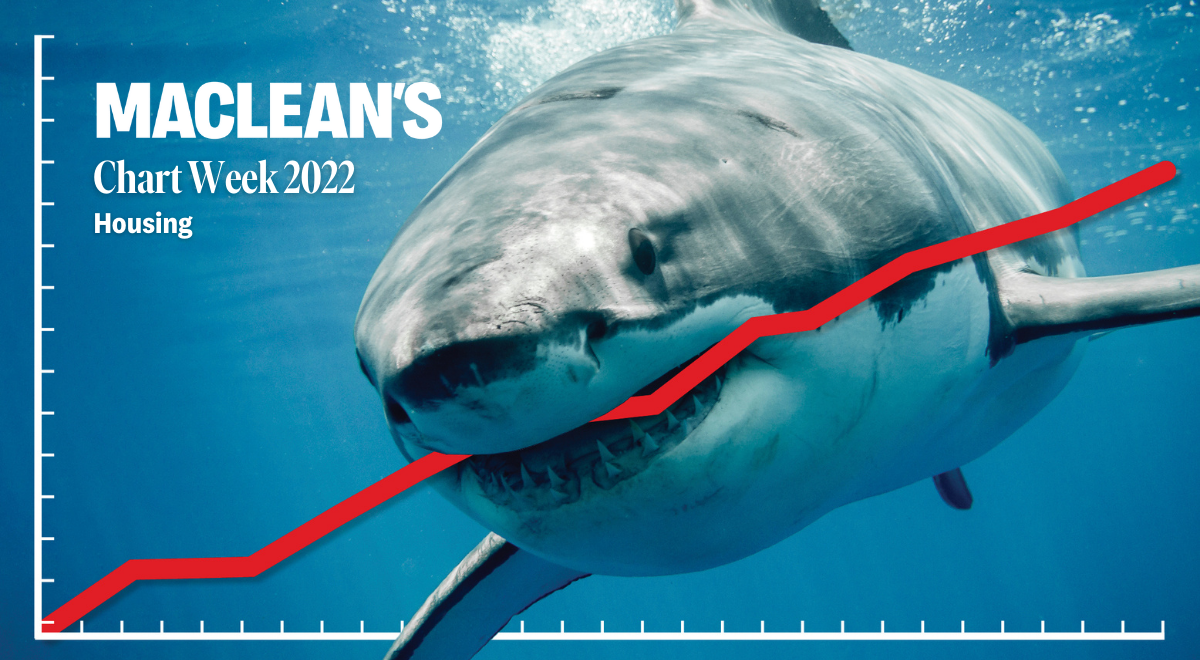 For Maclean’s eighth annual chartstravaganza, we’ve once again asked dozens of economists and analysts to ponder the year to come, and choose one chart that will help shape Canada’s economy in 2022 and beyond, and explain this outlook in their own words.

This year, we’ve decided to release the charts over several days, making this more of a Chart Week than a one-day data binge. We also cover jobs and income, inflation, COVID, and energy. 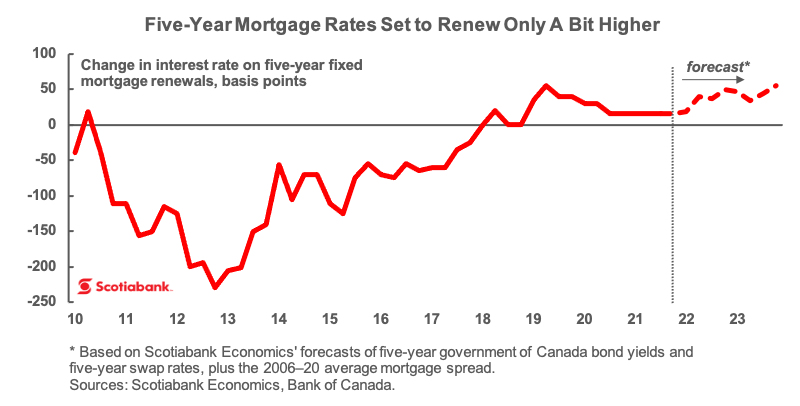 Canadian households and housing markets can weather the interest rate increases the Bank of Canada is widely expected to deliver next year. At present, fewer than half of Canadian households have mortgages or home-equity lines of credit (HELOCs). About 75 per cent of existing mortgages are locked in at fixed rates, while the much smaller stock of HELOC balances carries floating rates. Scotiabank Economics expects holders of the most popular five-year term mortgages that renew in 2022 to see their rates increase by an average of 36 basis points (bps), which translates into about $50 a month in additional payments on the current average outstanding loan balance of $241K. Renewals in 2023 are forecast to see rate increases of about 45 bps, or around $65, in additional monthly payments. While no one wants to pay more on their mortgage, Canadian borrowers are set to absorb higher rates: under federally mandated stress tests, they had to show that they could cope with rates around 180 bps higher when they contracted mortgages nearly five years ago on larger principals.

New mortgages taken out during 2021 have been stress-tested against an even tougher standard: borrowers have had to show they could handle a 5.25 per cent interest rate, about 250 bps over five-year fixed rates and some 380 bps over variable rates on offer in December 2021. Although the share of variable-rate mortgages in new originations soared in 2021, they still account for only about one-quarter of all mortgage balances outstanding. Under most variable-rate terms, rising rates don’t trigger immediate increases in monthly payments; instead, amortizations are lengthened. Where higher interest rates do mean larger current debt-servicing costs, mortgages can generally be converted into fixed-rate loans.

Canadians are ready for a return to normal interest rates.

Inflation is behind home price growth—way behind 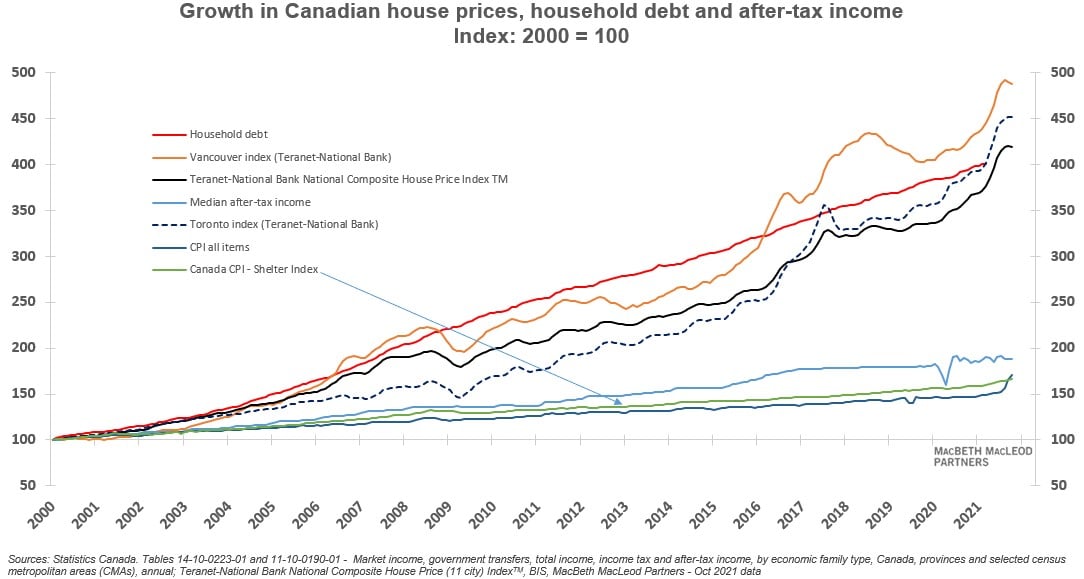 Canada’s housing bubble has grown into a massive problem for the Canadian financial system. House prices are much higher here than in most other countries, and levels of household debt incurred to keep up with the bubble are now a major risk.

One of the less well-known aspects of the bubble is its lack of upward pressure on inflation and the consumer price index, even as house prices have soared.

This chart shows that house prices in Toronto, Vancouver and nationally have grown about 4.25 to almost five times, with household debt keeping pace. That rate of increase is above seven per cent per year. Yet, the CPI measurement of housing costs known as “shelter” (shown in green with the arrow) has only inched ahead, growing by about 1.6 times. Most of the time that growth has been less than two per cent per year.

You might ask how this happened, especially since “shelter” is the largest weight component of CPI. Statistics Canada uses a monthly payments approach to measuring housing costs. The cost of buying a home is not included. A key part of the monthly cost of housing for owned accommodation is the mortgage payment, comprising principal repayment and interest. And interest rates have declined steadily over the last two decades, keeping the house-price bubble alive but holding the cost of shelter to a smaller gain.

The irony is that as the Bank of Canada increases interest rates, starting next year, house prices might drop, yet the CPI measurement of housing costs will grow, as the rate of interest is a significant weight in the calculation.

Housing construction will simmer down in 2021; will business step up? 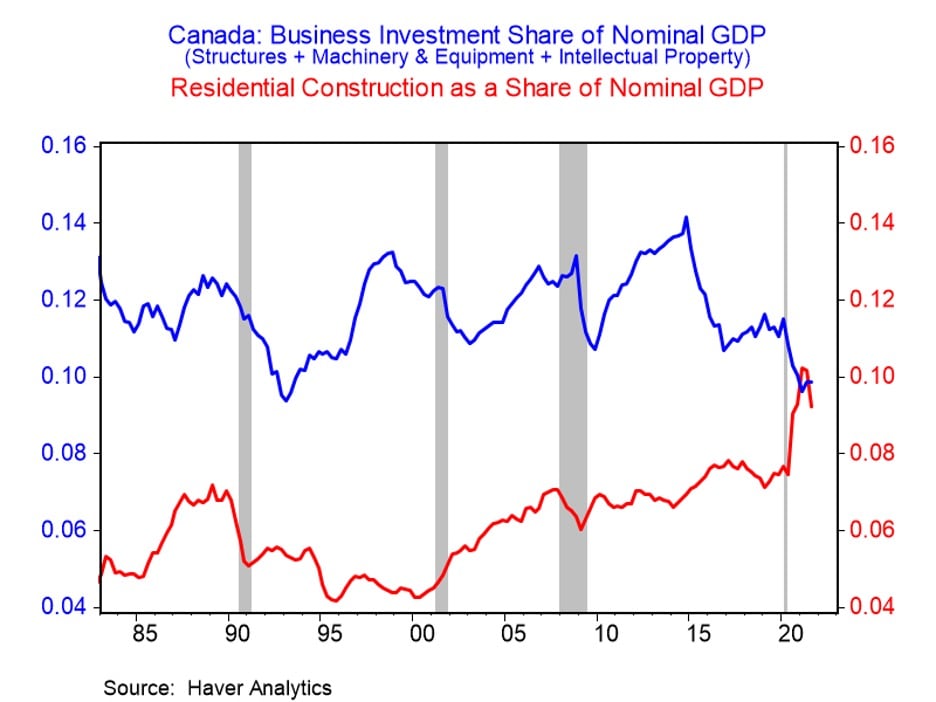 Amid the many staggering economic statistics that emerged from the pandemic, this may be the most staggering: in the first three quarters of 2021, residential construction accounted for a larger share of Canadian GDP than did business investment. That has never happened before, not even close. In the 50 years prior to the pandemic, business investment was typically about twice as large a share of the economy as housing—a “normal” year would see about 12 per cent devoted to private capital spending and six per cent to residential construction. (Statistics Canada includes new homebuilding, renovation activity and real estate agent fees in the latter.)

The crossover in 2021 speaks to both (a) very weak business investment (tied with 1993 as the lowest on record), and (b) very strong housing activity (a record high share). Because all of these figures are stated in current or nominal terms, sizzling home prices played a role in the ballooning housing activity. But even in real or inflation-adjusted terms, housing’s share of activity would still rival the late 1980s for the strongest on record.

Looking ahead, housing is expected to simmer down from the 2021 extremes, and it was already easing from the early-year fireworks. The bigger question mark for the Canadian economy is whether business investment can now step up—we suspect it will, but look for only a moderate near-term recovery. Canada’s heavy dependence on housing doesn’t look to end anytime soon. 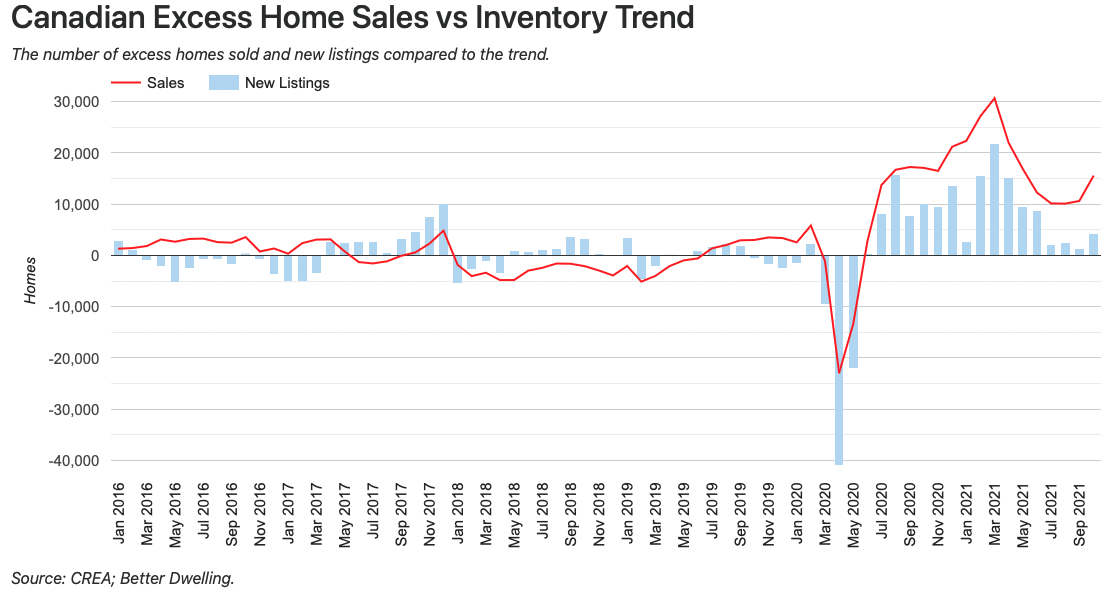 There has been a lot of focus on a lack of housing inventory, but little focus on the real issue—excess demand. When the Bank of Canada (BoC) cuts rates and uses quantitative easing, they’re looking to stimulate demand to raise inflation. The mechanism of lowering rates pulls consumers forward, to compete with existing buyers. Higher competition for the same lot of goods means more inflation.

That’s what’s happening with real estate. From April 2020 to October 2021, Canada saw about 246,500 excess home sales above the trend. In contrast, new listings came in higher, but just 85,800 homes above trend—far lower than the boost in home sales.

Separately, BMO estimates the annualized dollar value of excess home sales to be around $150 billion. It’s about the equivalent of six per cent of Canada’s GDP. That’s not total sales, it’s just the excess above the trend, stimulated by cheap credit. Keep in mind, this is happening with virtually no population growth.

The BoC stimulated demand to raise home sales and inflation, and now pretends it has no idea where it came from. Golly gee whiz, what a mystery. 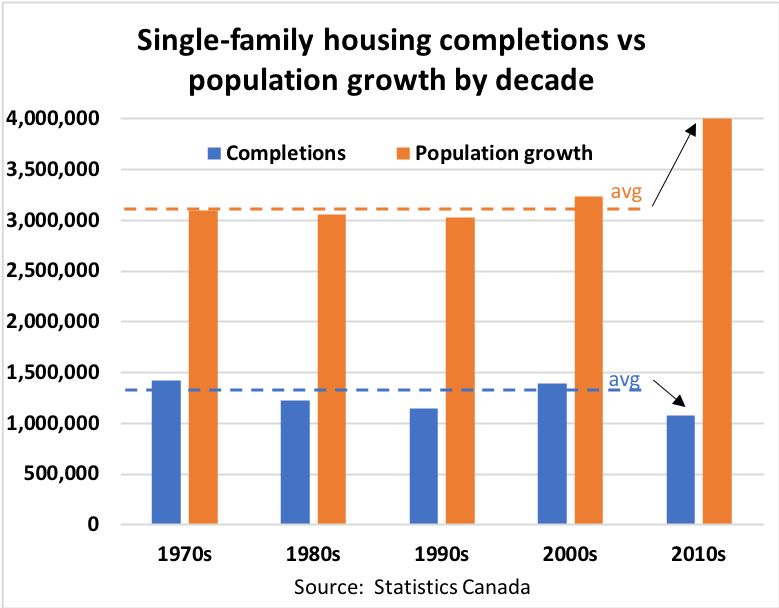 The number of single-family homes listed for sale in major metropolitan areas across the country has fallen precipitously in recent years. In the Greater Toronto Area, listings have fallen 52 per cent compared to last year and are down a stunning 77 per cent from 2017 levels. In Vancouver, it’s a similar story, with inventory down by nearly one-third compared to last year and by over half since 2018.

While excess demand and speculation are no doubt contributing factors to this decline, the main driver appears to be a shortfall in new construction in the past decade at a time when population growth was exceptionally strong. From the 1970s until the 2000s, population growth averaged about 3.1 million per decade while new single-family completions averaged just under 1.3 million. But in the 10 years from 2010 to 2019, population growth surged to four million, while new completions fell to less than 1.1 million.

Until Canada figures out how to right this imbalance, we can expect single-family homes to be coveted assets in major markets across the country.