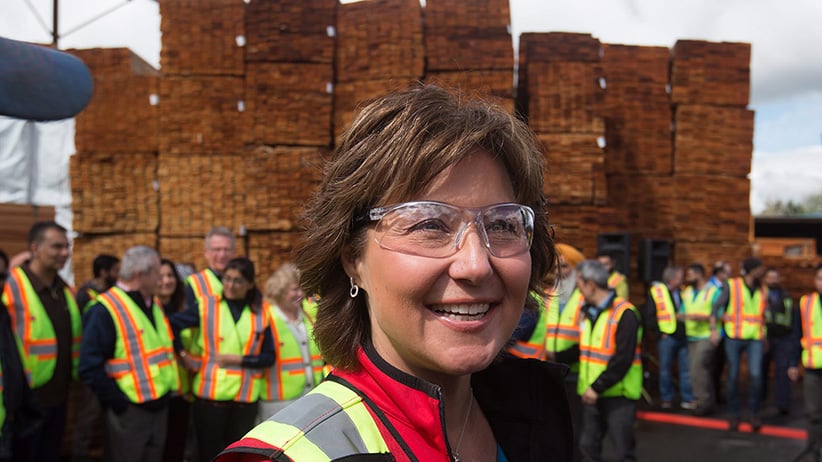 Liberal Leader Christy Clark greets workers during a campaign stop at CedarLine Industries, a manufacturer of western red cedar products, in Surrey, B.C., on Monday April 24, 2017. A provincial election will be held on May 9. (Darryl Dyck/CP)

Clark says she has written to Prime Minister Justin Trudeau asking Ottawa to act by stopping the export of the coal, including from the United States.

The B.C. Liberal leader made the announcement Wednesday at a paper products company in Surrey while campaigning for the May 9 provincial election, saying the impasse over softwood lumber “gives us the freedom to do what I think is unquestionably the right thing.”

“That coal, most of it is American but not all of it that’s shipped through our ports, is dirty. It fouls the air. It fouls the oceans. It’s terrible for the environment.”

MORE: Is history repeating itself in the softwood lumber dispute?

Clark said a ban would fit with her goal of developing a liquefied natural gas industry, arguing if China were to shift from coal to LNG it would have “a massive impact” on greenhouse gas emissions.

“So it’s the right thing to do, but I haven’t felt free to be able to do that because I haven’t wanted to upset negotiations that seemed to be going along, granted at a slow pace,” she said.

“But now that they have slapped a duty on Canada and they’re calling us names, we’re free to take an action that’s long overdue.”

The U.S. is imposing duties of up to 24 per cent on lumber imports from Canada. The B.C. Lumber Trade Council says the province exports $4.6 billion in softwood lumber to the U.S. each year.

The leaders of B.C.’s main three parties are scheduled to take part in a televised debate Wednesday night.

NDP Leader John Horgan campaigned in Burnaby on the soaring price of housing in Metro Vancouver and met people who are struggling to afford homes that meet the needs of their growing families.

He said the Liberal government was slow to react to the skyrocketing price of homes and rental units in the province and that has largely benefited investors and developers.

He linked housing with his continued criticism of the Liberals over political fundraising.

Although his party receives corporate and union donations, Horgan said his first action if the party forms a government would be to ban such donations to political parties.