It seats five, can hit 328 km/h and doesn’t have a business case to speak of. But Dodge’s muscle car may be a stroke of marketing genius. 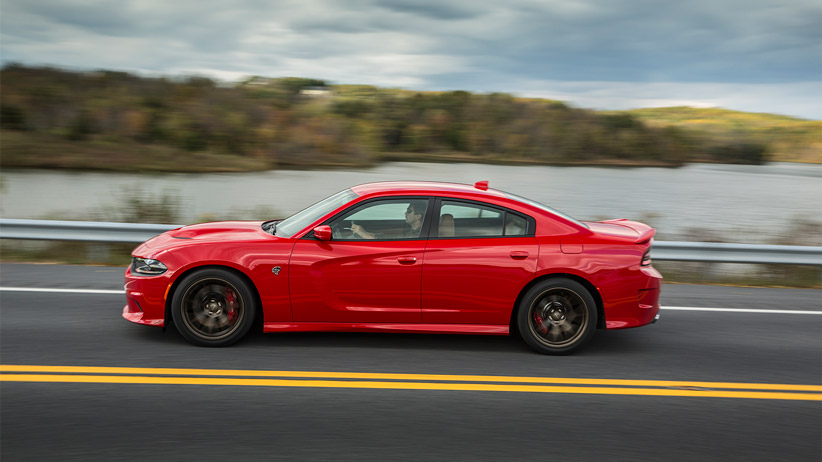 Stupid. Insane. Loony-tunes. All have been used by car bloggers to describe Chrysler’s latest four-door sedan: the Dodge Charger SRT Hellcat. With 707 horsepower under its hood—more than, say, a Lamborghini Aventador (or most high-performance coupes for that matter)—it’s easy to see why driving enthusiasts are losing their collective minds. More important, the Charger costs less than $65,000, as does its two-door cousin, the Dodge Challenger SRT Hellcat. The Lambo? More like half a million.

It’s almost as if Chrysler engineers ditched their spreadsheets—and the whole drive to boost gas mileage and curb emissions—to focus on making car nerds’ daydreams come true. No one needs a car capable of 328 km/h while seating five comfortably. But that’s not the point. Building the “world’s most powerful production sedan,” as Chrysler calls it, is a way to stand out from the crowd. “For the last three months, the Dodge brand been the most searched [automotive] brand on the Internet,” says Timothy Kuniskis, Dodge’s president. “That’s never happened before for our company.”

The Hellcat’s overnight popularity—online at least—has already prompted Ford Motor Co. to announce plans to build a Mustang RTR with 725 horsepower. And surely it won’t be long before General Motors unveils an upgrade for the Camaro. Even so, the Hellcat stands as an important marketing coup for Chrysler, which is on a roll lately—from its frequently aped “Made in Detroit” campaign to its Dodge Durango TV ads starring Will Ferrell as Anchorman’s Ron Burgundy. With the Hellcat, the folks in Auburn Hills have single-handedly reset public expectations about the middling Dodge brand—a feat almost as impressive as building the world’s fastest grocery-getter.

Kuniskis is coy about how long the Hellcat was in development, saying it stemmed from a decision earlier this year to combine Chrysler’s street racing technology (SRT) division with the Dodge brand. But in a recent article in Automotive News, Chris Cowland, Chrysler’s director of advanced and SRT powertrain, said the Hellcat was discussed as far back as 2011, only to be shelved when engineers were pulled to work on other projects. The SRT engineers later lobbied for the Hellcat, and Chrysler executives acquiesced.

They are probably glad they did. Dodge says it’s received more than 5,000 orders for the Challenger Hellcat while orders for the Charger SRT Hellcat will be taken in mid-December (incidentally, neither car is “made in Detroit,” but at a Chrysler assembly plant in Brampton, Ont.). But the real achievement is buzz. YouTube is filled with giddy test drivers stomping on the gas to unleash the Hellcat’s guttural howl, followed by squealing tires, acrid smoke and long patches of hot rubber. Reviewers, meanwhile, marvel at the audacity of building such an over-the-top car. That’s a perception Kuniskis is only too happy to indulge, having proudly suggested it “has no business case”—other than grabbing people’s attention, of course.

Equally impressive: most of this was accomplished with Chrysler’s existing parts catalogue. Engineers dropped a supercharged 6.2-litre V-8 Hemi into a pair of current production models, albeit after making numerous tweaks to accommodate the extra power and heat, including hood scoops. “I call it good, old-fashioned smart marketing,” says Jim Wangers, 88, who is credited as the father of the muscle car because of his Pontiac GTO ad work in the 1960s. “This is the kind of thing you do when you don’t have a new car to sell, which Chrysler doesn’t this year.”

It’s also a way to conjure an image—performance—around a nameplate that doesn’t presently have one. Say the word “Dodge” and, until recently, it could bring to mind anything from Ram pickups (now its own brand) to the discontinued Caliber compact (known, if at all, for its “Chill Zone” cooled drink holder). “Dodge is in the middle of a revamp,” says Jeremy Acevedo, an analyst with car website Edmunds. “Their current top-seller is still a minivan,” which will be discontinued in 2016.

If there’s a danger for Chrysler, it’s doubling down on Detroit’s long-standing penchant for big, burly and fast. That’s fine when oil prices fall, as they have in recent months. Indeed, Chrysler recently reported its 55th month of consecutive sales gains in the U.S., thanks in part to rekindled interest in its truck- and SUV-heavy lineup. But things could change in a hurry. It was just last summer that gas prices hit a record $1.55 a litre in parts of Canada. Kuniskis, however, argues there’s always a market for performance, and not to discount the halo effect bestowed on the more utilitarian vehicles in an automaker’s lineup.
Wangers, now a consultant with a collection of ’60s-era muscle cars, is more philosophical. American cars have never been solely about transportation, he says. They’re lifestyle machines—something he recognized decades ago when building the Pontiac brand. “Ever since there’s been two cars, there’s been a race,” he says. “It will never change.”