Here are how some key measures of Canada's economy changed since Stephen Poloz's first interest rate cut in 2015, all in one handy chart.

It’s rate decision day, when Canadians find out the answer to the question on everybody’s minds: Will Bank of Canada Governor Stephen Poloz cut rates again, or won’t he? (Update: He won’t.)

But this is also the one-year anniversary of Poloz’s surprise rate cut in January 2015, when the Bank stunned markets by cutting its benchmark rate to .75 per cent from 1 per cent. (Another 25 basis point cut followed that June.)

A lot has changed since then–in particular the continued drop in oil prices, which now sit below US$30 a barrel. Did those rate cuts work? Would employment and GDP growth have been worse without the cuts? Or did the cuts exacerbate other existing problems, like household debt and overinflated housing markets? It’s impossible to say for certain either way, but knowing how the economy has changed over the last year is an important first step in figuring that out.

So here in one chart are some key measures of Canada’s economy, and how they changed in the time since that first rate cut. For comparison, the chart includes changes over the same period in 2014. (On mobile, turn to landscape for best viewing. Click to open larger in a new window.) 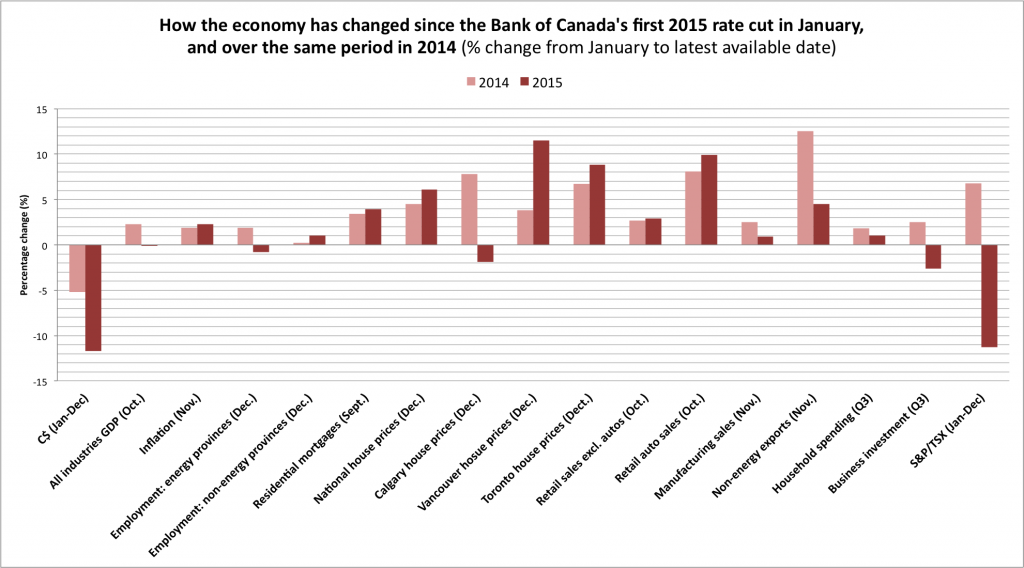 You can see for yourself the changes, but a few points are worth making. As predicted—and, arguably, as Poloz hoped—lower rates triggered households to continue to borrow and spend on cars and houses. However, business investment retrenched in 2015, while lowered rates also appear to have done little to boost manufacturing or even non-energy exports.

Update: On Wednesday StatsCan released manufacturing sales for November. Sales were up one per cent from the month before, but were still down 0.4 per cent from November 2014, despite the heavy assist from the collapsing loonie.

All of these will have been factors that went into Poloz’s decision today. Now all we have to do is wait.