Surviving foreclosure in Alberta: 'I thought I could do it'

In Alberta, a combination of high house prices, soaring personal debt levels and a wave of job losses have pushed many into foreclosure 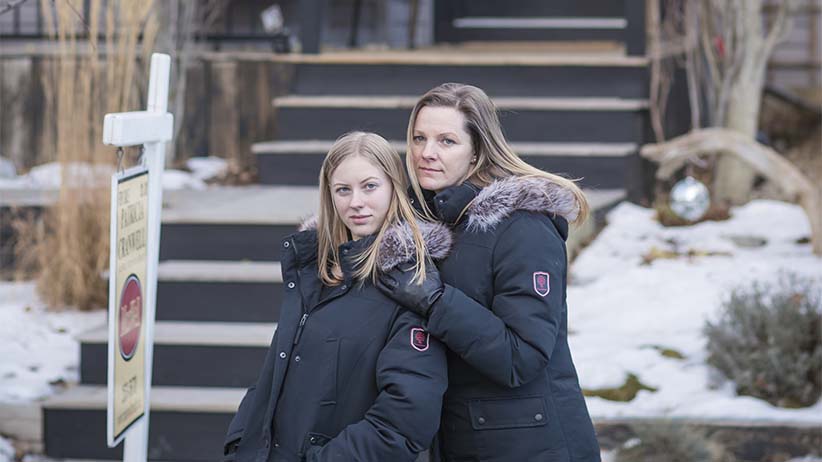 Calgary resident Trina Trapp, pictured with her daughter, Emily, is losing her house to foreclosure. (Photograph by Chris Bolin)

The Calgary Herald‘s Dec. 24, 1983, edition was a reflection of its time: Jeanne Sauvé was appointed Canada’s first female Governor General; retailer Waterbed Warehouse opened its third local big box store; and a Vancouver janitor was en route to Parliament Hill to perform an anti-Trudeau (Pierre Elliott) version of “Twelve Days of Christmas,” complete with the lyric “five metric morons.” More ominously, the newspaper’s classified section contained page after page of foreclosure notices—208, to be exact. It was a stark reminder that, even on Christmas Eve, many Calgary families were being kicked out into the cold as economic fallout from the oil crash spread.

Thirty-three years later, a similarly depressing scene is playing out in Calgary’s crescents and cul-de-sacs. With the region mired in another oil-induced recession, the number of foreclosures are once again on the rise—just in time for the 2016 holiday season. Tim Reid, the founder of Phoenix Real Estate Investing, which works with distressed homeowners, says the number of foreclosure notices issued by Alberta courts in Calgary and Edmonton jumped by about 15 per cent from November to December, and is up as much as 40 per cent on the year. “It’s definitely gotten worse,” he says.

RELATED: The death of the Alberta dream

Yet Reid says the figures probably understate the actual level of financial stress experienced by local families because banks are still doing everything they can to avoid foreclosing on a property, a cumbersome and costly process. That often means working out a new financial arrangement with borrowers to put their mortgages back into good standing—sometimes with the help of a company like Phoenix, which will even buy homes and rent them back to owners (and make a tidy profit in the process). Reid says such workarounds are far more common today than even just a few years ago, during the Great Recession, because the economic pain is confined to a single region and bank balance sheets are generally in good shape. “The big banks and other lenders are a lot more understanding,” he says. “They’re not dealing with foreclosures across the country.”

At least not yet. Nonetheless, Canadians trying to imagine how a broad economic downturn could play out should pay attention to what’s happening on the Prairies, where high house prices, soaring personal debt levels and an unexpected wave of job losses proved to be a toxic mix.

The website ForeclosureSearch.ca currently lists about 620 properties in Alberta that are either in foreclosure or listed for sale by a “motivated seller,” which the site says means they are either “fixer-uppers or properties that are on the verge of foreclosure, bankruptcy divorce and so on.”

The Canadian Bankers Association (CBA), meanwhile, tracks the number of mortgages in arrears for three or more months. In Alberta, they totalled 2,506 in November, or about half a percent of all mortgages in the province. That’s almost double two years ago, but still significantly less than the 4,245 recorded in January of 2010 in the immediate aftermath of the 2009 recession. Nationally, the number of homeowners in arrears represents about a third of a percent of the roughly 4.7 million mortgages outstanding, according to the CBA.

The real estate industry likes to cite the low percentage of mortgages in arrears—“less than one per cent”—as evidence of a sound housing market. But it’s worth noting that even back in 1983 the number of mortgages in arrears in Alberta was a still modest-sounding 2.8 per cent. In addition, the number of arrears could spike overnight in the wake of another economic shock, since Canadians are saddled with far more debt than they were even eight years ago. The latest figures shows the household debt to disposable income ratio at 167 per cent—higher than in the U.S. before the crash.

Already there’s mounting evidence to suggest many Canadians homeowners are skating perilously close to the edge. A recent survey by Manulife Financial found a third of respondents would have difficulty making their monthly payments after three months if the family’s main earner lost his or her job. One in six said they would have trouble making mortgage payments if interest rates rise (long-term interest rates jumped following the November election of Donald Trump as U.S. president, while the U.S. Federal Reserve earlier this month raised its trend-setting rate for the second time since the 2008 crisis). Another survey earlier this year by Ipsos Reid found nearly half of Canadians were $200 a month away from being unable to pay their bills and other debts.

Trina Trapp is among those Albertans who discovered it doesn’t take much to go from keeping up with the Joneses to struggling to keep a roof over your head. She recently went through a difficult divorce that left her with a house in a downtown Calgary neighbourhood, as well as a sizable mortgage that included money previously borrowed on a home equity line of credit. She received her first foreclosure notice from the bank last January and, with the help of her teenage daughter, immediately set about trying to replace a chunk of her ex-husband’s six-digit oil patch income during the court’s six-month “redemption period.” In addition to working as a waitress and bartender, Trapp launched a bed-and-breakfast, took in exchange students and listed a spare bedroom on Airbnb. But despite her efforts, as well as the recent start-up of spousal and child support, it wasn’t enough to dig herself out of a financial hole. “I thought I could do this,” she says. “I really did.”

RELATED: What the oil crash means for Canada

Homeowners at risk of being pulled under would be wise to educate themselves about what happens if they miss a house payment. Trapp describes a process that resembles quicksand. Her first eye-opener: after receiving notice from the bank she sold a motorcycle and a four-wheeler in the hopes of catching up on her payments. But the cash was instead used to pay the bank’s legal and administrative fees, for which she is now responsible. “The way the lawyers and judicial system are dragging it out, I’m going to just get nickeled and dimed to death,” she says, adding she hopes others will learn from her experience and avoid making the same mistakes.

Trapp also learned court-ordered home sales aren’t nearly as smooth as their non-judicial counterparts. Though her house is “immaculately staged” and in a desirable neighbourhood, she says buyers are spooked by the court’s boilerplate sale conditions. They stipulate that the house can’t be sold conditionally on a home inspection, and that appliances and fixtures aren’t to be included. Why? Lenders don’t want to be held responsible for deficiencies in the properties they’re selling, or for the actions of financially distressed owners, who have been known to strip their houses bare—even removing toilets—before handing over the keys. But while Trapp says the policies are understandable, she argues they hardly make sense in her case. Far from lugging out the washer and dryer, she says she’s dutifully working with a real estate agent to show the house and, at the agent’s request, even put up Christmas decorations to give the place a more “homey” holiday feel.

Reid says Trapp’s frustration is common. When it comes to lending money, he says, banks and other financial institutions run like well-oiled machines,“but when it comes to calling those loans, they’re not very experienced or, frankly, built for it.” He adds the clunkiness is magnified in Alberta where homes facing foreclosure are effectively handled by judges and lawyers instead of industry professionals. Ontario, by contrast, uses a power of sale process in order to allow lenders to recoup their money more quickly by avoiding the courts.

Alberta is also unusual since it’s one of only two provinces (Saskatchewan is the other) that allows underwater homeowners to essentially “walk away” from their houses—and mortgage obligations–without further recourse or even damage to their credit ratings. This is what happened back in the early 1980s when Calgary was plagued with so-called $1 mortgage deals, a reference to homeowners so desperate to escape their underwater mortgages they sold their houses for the price of a couple of games of arcade Pac Man. (During the U.S. crisis, the act of mailing one’s keys to the bank was known as “jingle mail”). The exception is homeowners who were forced to purchase taxpayer-backed mortgage default insurance from Canada Mortgage and Housing Corp. (CMHC), or its main private sector rival Genworth Canada, because they put down less than 20 per cent of their home’s value. These Alberta homeowners can not only lose their house, but are at risk of being sued by their insurers to recover any losses. Jeffrey Kahane, a Calgary real estate lawyer, says he’s seen several such unfortunate cases in the past few weeks.

MORE: 75 charts every Canadian should watch in 2017

If there’s a bright spot, it’s that things could always be worse. Bob Blakey worked at the Calgary Herald in the 1980s and, by coincidence, penned a column about the $1 home sale phenomenon in the paper’s 1983 Christmas Eve edition (a close friend was forced to sell his newly built home in the city’s Shawnessy neighbourhood for a buck). Now retired, he says the sense of economic malaise was far more palpable 30 years ago when Calgary was about half the size, and far more dependent on a single industry. “It was a sad time,” he says.

Of course, that’s small consolation for those in the process of losing their house today. Though Trapp estimates she still has about $150,000 of equity once her outstanding mortgage and other debt is factored in, she’s concerned there won’t be much left after lawyers and other paper-pushers take their share. In addition, the bank’s demanding Trapp vacate the property just before Christmas and asking the court to lower the list price of the house by $50,000 to speed the sale process—money that might otherwise end up in Trapp’s pocket to help pay for a new home or her daughter’s post-secondary education. “I waved my right to back payments on spousal and child support, and took a reduced amount because I thought I had equity in the home,” Trapp says. “It’s all I have left.”